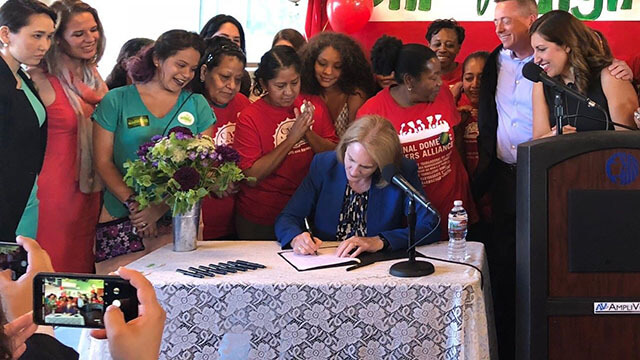 Seattle is now the first city in the country to enact a Domestic Worker Bill of Rights.  The law, which goes into effect in July 2019, aims to protect the roughly 33,000 domestic and household workers in the city, many of whom are independent contractors or have informal or “gig” relationships with their employers and are not covered by federal worker protection laws.

The ordinance was championed by Mayor Durkan and Councilwoman Teresa Mosqueda along with advocacy groups Casa Latina, the Seattle Domestic Workers Alliance, and SEIU 775. It stops short of requiring written employment contracts as was originally advocated by supporters of the legislation, though it adds several new protections and establishes a Domestic Workers Standards Board to oversee administration of the protections.

The legislation is an important step forward for domestic workers who are disproportionately minorities and immigrants and have often been exploited. However, it will require employers who in the past have had informal agreements and cash-based payments to do some research, pay attention to employment arrangements, and likely pay more to make sure they are in compliance with the law.

At the bill signing which took place at Casa Latina, Councilwoman Mosqueda bill sponsor and Chair of the Housing, Health, Energy and Workers’ Rights Committee, emphasized the importance of the bill to minority communities in Seattle.

“For far too long, domestic workers have lived and worked in the shadows of our economy. Domestic workers – who are primarily women, immigrants and people of color – and hiring entities have called for more protections. This bill extends basic labor protections to those whose work makes it possible for so many people to go to work, knowing their loved ones and home are cared for. I want to thank my Council colleagues, the workers, the hiring entities, the Mayor, advocates and community members who all came to the table to work on this legislation.”

The ordinance has been criticized by some as not going far enough. In March 2018, the Seattle Domestic Workers Alliance released a report that detailed many of the abuses regularly suffered by domestic workers. In addition to the protections passed in the ordinance, the Alliance advocated for several other protections commonly available to traditional employees such as paid sick leave, written contracts, workers compensation coverage, and the right to health insurance and other benefits.

According to a statement, Councilwoman Mosqueda and Councilwoman Lisa Herbold are currently working on a companion bill that would address sexual and workplace harassment against domestic workers. The bill would extend protections already available in an employer/employee context to independent contractors and is anticipated to be considered by the council in August.