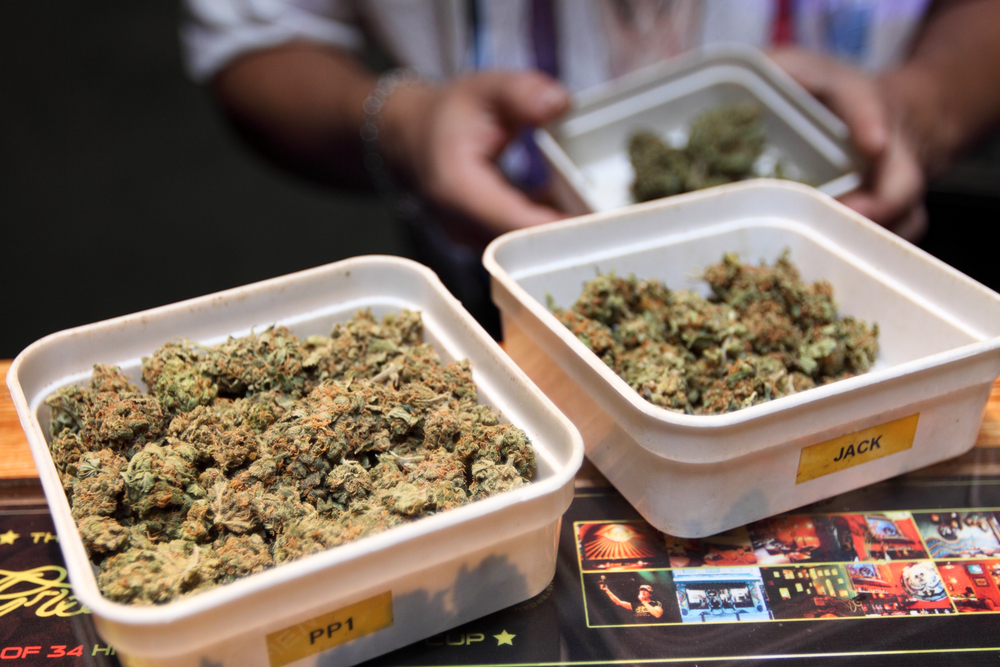 Is Marijuana Necessary to Implement the Budget?

A last minute effort to reform Washington’s marijuana market was brought forth this week.

HB 2998, introduced by Representative Chris Hurst, D-Enumclaw, reduces the tax on marijuana and prohibits bans and moratoriums on the citing of retail shops. Following failed efforts earlier this session, Hurst and his supporters are holding out tax revenues from marijuana sales as a carrot in budget negotiations.

Wednesday’s public hearing in the House Gaming & Commerce Committee focused on the impacts of the illicit marijuana market to local communities. Hurst, a former police officer, emphasized the public safety impacts of the non-uniform implementation of Initiative 502.

“I think you either have this or you don’t have this. What we are doing today is we are creating pockets of worse criminal activity… You’re taking the criminals who do resort to violent techniques and violent methods and you’re narrowing them down to smaller pieces of territory,” he said.

He pointed to two recent murders that took place in jurisdictions with bans on retail stores as evidence of the adverse effects of the actions taken by local jurisdictions. Hurst also emphasized the fiscal impact of crime saying, “There are five people facing murder charges, murder in the first degree. And even if those sentences are as little as 25 years a piece, that’s about 1.2 million dollars per suspect that the taxpayers are going to have to be paying the cost of.”

Statewide, there are 80 cities and 8 counties that have ordinances banning retail shops from opening, including larger jurisdictions like Yakima, Pierce County, Federal Way and Tri-Cities. This is according to Ezra Eickmeyer, a leading lobbyist for the marijuana industry. Overall, he says, that leaves almost 2 million Washingtonians without access to a retail location.

There is disagreement over the constitutionality of these bans, but as of now they remain in place. During Wednesday’s hearing a committee staff member noted that “because the text of 502 was silent regarding the authority of local governments to regulate licensed marijuana businesses and did not mention preemption, many cities and counties have enacted ordinances that prohibit the operation of marijuana businesses within their jurisdiction. In January of 2014 the Washington State Attorney General published a formal opinion stating that state law does not preempt local ordinances that impose bans or moratoriums regarding the citing of marijuana businesses.”

Cities and counties are strongly opposed to Hurst’s bill. In addition to citing local control as a key reason for their objection, they claim that access to marijuana isn’t a significant problem.

“What we’ve again seen around the state is that these are community decisions where the council is responding to concerns by the community… Overall we feel like these bans are not creating a significant access problem,” said Candace Bock on behalf of the Association of Washington Cities.

She went on to say, “We looked at where the bans are around the state and we found that about 90% of the state’s population lives within 10 miles of a retailer.”

In an interview, Eickmeyer pushed back against the 10 mile metric, saying, “Who drives 10 miles out of their way to get one item on their shopping list when there is a dealer willing to come to your house?”

As far as making the market competitive goes, there’s disagreement over that too. Brian Enslow, Senior Policy Director at the Association of Washington Counties, referred to data from the State Liquor Control Board during testimony on Wednesday. “Day after day the price of marijuana in Washington State is going down,” he said. Currently, the average price for a gram of marijuana is $6.97. “We can say that the tax puts us right around $10, which is competitive with the illicit market,” he concluded.

Hurst responded by clarifying that the range of a the price of one gram of marijuana goes up to about $60 per gram and said that he thinks the average price is on the “low end” in terms of both cost and quality.

Although publicly the focus is on the health of the marijuana industry as a whole and curbing crime related to the illicit market, the real incentive for cash-strapped lawmakers could be an increase in revenue to pay for additional spending. If the bill is deemed “necessary to implement the budget” it won’t be subject to regular cutoff rules.

The bill will likely be amended so that it only includes a statute prohibiting counties and cities from banning retail shops. Eickmeyer believes that the most politically feasible strategy is to amend the bill and show a positive impact on state revenues through a revised fiscal note (the bill’s current fiscal note is negative).

“Representative Chris Hurst decided to reformat a new bill and get a fiscal note to see how much this is worth, so that it could be made very clear what the minimal value to the state is,” said Eickmeyer. “If there’s leadership support for it, it could become part of budget negotiations and still have a chance of passage,” he said.

Tax revenues from marijuana sales have been higher than expected. They will be even higher with the upcoming merger of the recreational and medical markets in July 2016. Since the industry’s inception, it’s generated an average of $14 million dollars in state revenue each month. In February, the industry came close to 3 million dollars in daily sales.

If the bill moves forward, it would still allow for cities and counties to make their own zoning rules that affect marijuana retailers.

“On this particular issue, the state is leaving tens of millions of dollars on the table each year. If we ended bans and moratoriums tomorrow and there was just one store in each jurisdiction that currently has a ban, if I’m being conservative, we’d see a 15% increase in revenue worth an additional $26 million each year. A more realistic increase of 40% would mean 60 or 70 million dollars in new revenue each year. And, this is assuming that the marijuana industry continues to capture less than 2/3 of the overall existing marijuana market.”

The budget proposals are far apart, with the Senate looking to increase spending by $33.6 million in the 2015-17 biennium and the House going for an increase of 478.4 million dollars. The House budget depends on a tax increase and tapping into the “rainy day fund” (also known as the Budget Stabilization Account).

Senate Republicans have been clear in their opposition to using rainy day funds and raising taxes ahead of elections is dubious. Already, the House and Senate supplemental budgets transfer 14 million dollars out of the account that holds marijuana revenues to meet spending needs. The revenue could be tempting to House Democrats who have a long list of spending items.

Some, like Eickmeyer believe there is still a fighting chance. “We still have an excellent shot of getting something out of this bill. I’m fairly certain that we have the numbers in the House, and if the House passes it, I think that the Senate will give it serious consideration.”