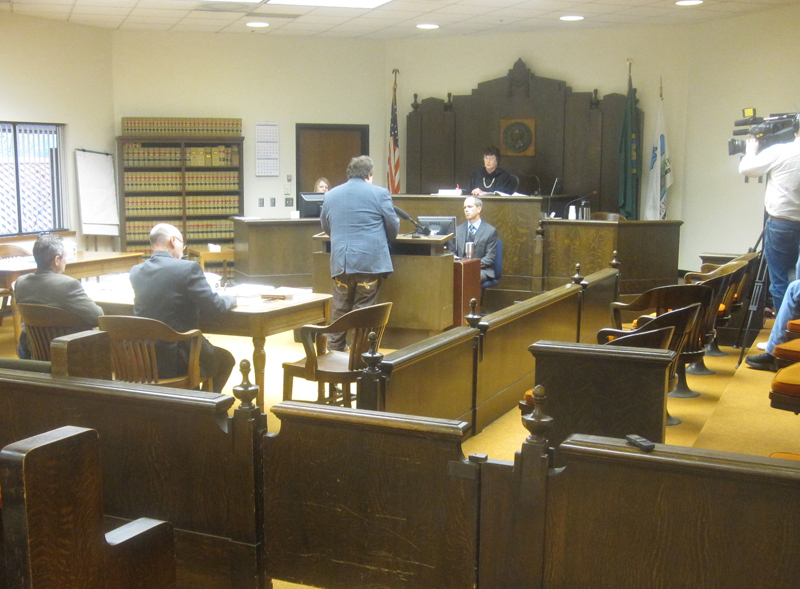 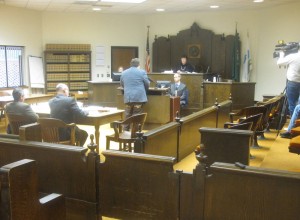 The scene in Thurston County Superior Court as Judge Lisa Sutton decided round one of what promises to be a long-running legal battle.

OLYMPIA, Dec. 7.—Washington State’s groundbreaking marijuana-legalization law survived its first legal challenge Friday in Thurston County Superior Court, marking the start of legal warfare over Initiative 502 that is likely to be waged for the next several months, at the very least.

This one’s a matter of state law, not the biggie from the feds that could come at any time – or not at all. Judge Lisa Sutton rejected a request for an injunction that would have blocked new penalties from being imposed for driving under the influence of marijuana. It is part of a broader challenge filed by Olympia paralegal Arthur West, arguing that the ballot title was inadequate and that the initiative violated the “single-subject rule” imposed by the state constitution.

West, who represented himself Friday, has a reputation around the state’s capital city as a bit of a gadfly, representing himself in numerous challenges against government agencies for failure to produce public documents – often winning settlements in the process. But this is a more personal crusade. He is a medical-marijuana user himself, and he says the new law will lead to the corporate takeover of what is now a largely underground business. Like many in the medical-pot community, he notes that the stricter DUI penalties included in the new law were devised to beat a potential opposition argument at the polls. He fears they will lead to prosecutions of pot-smoking motorists without reasonable cause.

Sutton’s ruling Friday appeared a sweeping dismissal of every argument West made in his lawsuit. Consider it a rather strong hint that his suit may not fare very well in lower court when it comes time for an actual judgment. But never fear, West said – this one’s going all the way.  “We’ll get a ruling one way or another, but either way, if the state prevails or I prevail, there certainly will be an appeal.” When it gets to that stage, he says he has a professional law firm that will step in. 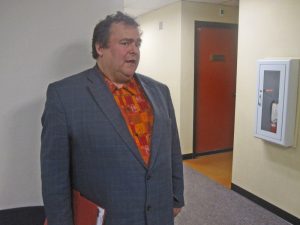 Arthur West chats with reporters in the hallway following the court hearing.

Washington voters and their counterparts in Colorado passed first-of-their kind marijuana-legalization laws Nov. 6. The Washington law is highly prescriptive, directing the state Liquor Control Board to develop an intricate regulatory apparatus for pot growers, processors and retailers. The idea is that by the end of next year, pot stores will blossom across the state, creating a billion-dollar-a-year industry, and one that will deposit huge tax revenue in the state treasury. Until then, the possession of marijuana is legal in this state, but not its sale and production – a fact that presumably will be treated with a nudge and a wink as the state’s estimated 363,000 marijuana users obtain their herb from accustomed sources.

Federal officials still must decide whether to challenge the law on federal preemption grounds – marijuana remains illegal under federal law. Meanwhile West appears to be leading the charge for the state’s rather disorganized medical-marijuana forces. You could tell by looking at him that he’s no conventional attorney. The paralegal appeared in court Friday attired in purple tennis shoes, an orange sport shirt, cargo pants and a blue plaid suitcoat.

Yet West makes a reasonably well developed legal point. He says the new law represents a significant change in Washington state’s DUI laws. It imposes a new definition of impaired driving he says could easily ensnare regular marijuana users – five nanograms of THC per milliliter of blood, easily reached when one develops tolerance, and which is therefore no measure of impairment. “I probably have more than that right now, in fact I’m almost certain that I do,” he told reporters afterward. “But I don’t consider myself to be impaired. I think I can drive accurately, but if I get pulled over on the way back from the courthouse to my house, and the state trooper thinks that I am impaired, I could be facing a DUI prosecution.”

Until the law took effect Thursday, the rule was that a driver could be charged if he or she showed signs of impairment. Under the new law, the five-nanogram threshold is defined as impairment – even if there is no evidence of impaired driving. West argues the change in the law should have been mentioned in the description, and that the blood draws violate protections in the U.S. constitution against illegal searches and seizures.

Officials of the state attorney general’s office are defending the new law. Even if the definition of impairment has changed, they say there is no substantial change in the overall law. Bruce Turcott, the assistant attorney general assigned to defend the initiative, said police already have the right to pull people over and seek a blood sample if they suspect impaired driving due to drug use. “Law enforcement officers must have reasonable grounds to believe that the driver is under the influence of marijuana or any other drug in order to ask for a blood test, and this was true before 502 became effective and after it became effective yesterday,” he said.

Judge Sutton said she agreed there was no substantial change in the law. But there was another key point in her ruling: She held that West didn’t have standing to challenge the new DUI law because his argument was hypothetical. To challenge the DUI rule, there needs to be a “judiciable controversy” – a pot smoker actually has to be stopped and charged with DUI. “A speculative or hypothetical set of facts does not suffice,” she said.

It appeared Sutton didn’t think much of the overall lawsuit. As part of the evaluation process for an injunction she had to offer an opinion on West’s chances in court. And after saying she didn’t believe West had a case against the new DUI penalties, Sutton also said she believes the initiative itself passes constitutional muster.

Sutton observed that the state has a difficult task writing a 30-word “concise description” for the ballot, especially when initiatives are complex – so it can’t be expected to explain everything. And she said she thinks the initiative clearly confined itself to a single subject. “All the parts of the initiative relate to the general topic of marijuana, which is what the ballot title said that the initiative was about,” she said. “The provisions have a rational unity – they are all related to the production, processing, sale or possession or marijuana.”

There was an ironic touch to West’s argumentation. He said the effect of the new law is to discourage people from smoking marijuana, particularly those who have been issued a prescription, as he has for chronic pain. Thus he said the law will have a “chilling effect” on people who are exercising their right to toke.

West’s point is that police officers can find plenty of excuses to pull over a driver that have nothing to do with impaired driving. West said he has been stopped for “having one taillight dimmer than the other, or because officers don’t like me or because they don’t like my attitude.” If a law enforcement officer gets a whiff of that certain easily recognizable odor and suspects drug use, that gives him probable cause to call for a blood test.

West said, “I would hope that there isn’t a spike in the number of blood tests, but that is exactly why we have a ‘chilling effect’ analysis in constitutional law, so that you don’t have to wait until criminal laws are applied before you challenge whether or not they are legal. And in this case, I don’t think it is fair for patients and the general public to require them to await the verdict of the street, for terminal cancer patients, leukemia patients, people with serious medical injuries, far exceeding what I have, for merely taking their medicine and trying to drive to their doctors’ appointments.”