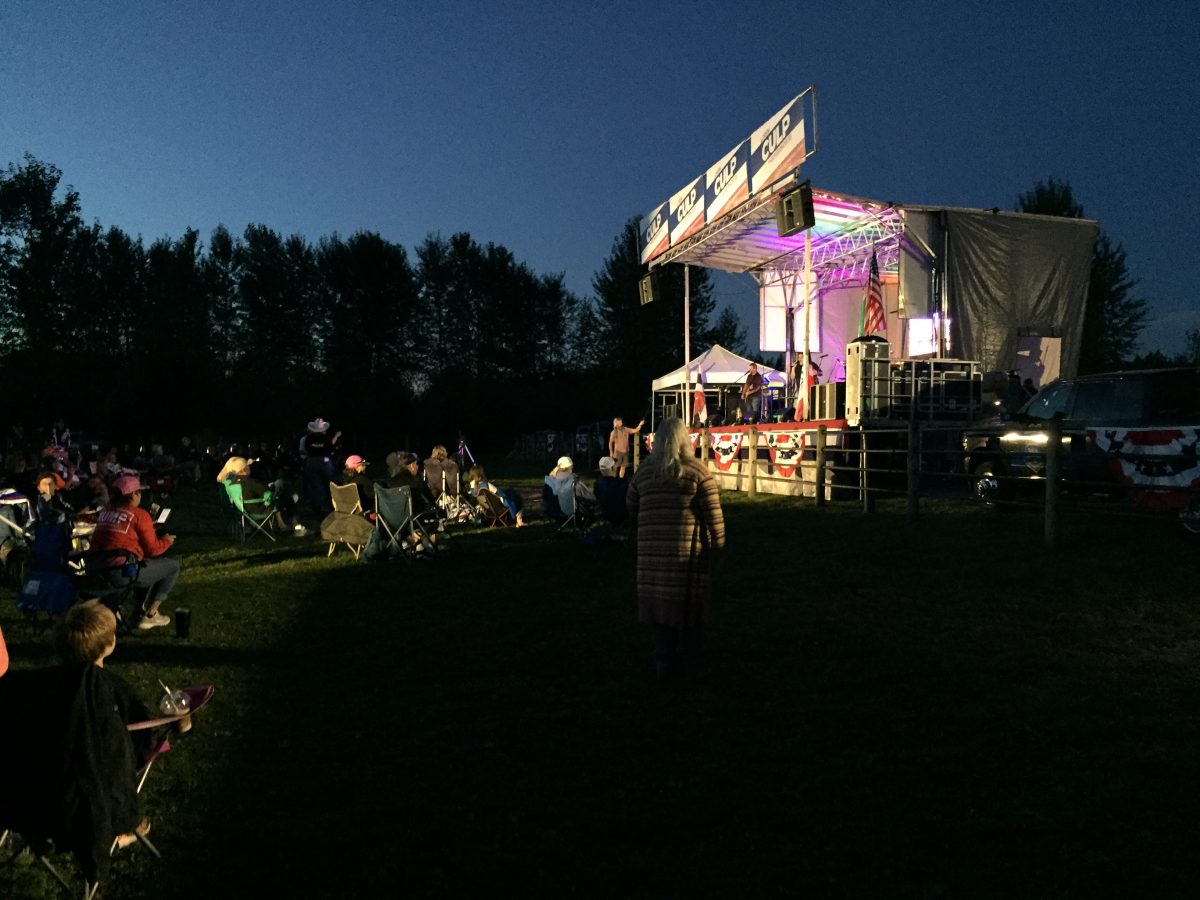 Republican gubernatorial nominee Loren Culp made an appearance in the city of Redmond recently for a campaign rally.

The second stop in a series of rallies the Culp campaign is calling “Victory Protests,” the Redmond event was attended by about 130 supporters, several Republican candidates for office among them.

Sticking to the rubric projected by his campaign slogan – Send Common Sense to Olympia! – Culp pitched himself as the reasonable option between himself and Gov. Inslee, whose policies he derided as “wasteful” and “pathetic.”

Culp regaled the crowd with broadsides against “overtaxation”, “defunding the police,” and “liberal democrat” approaches to addressing addiction and homelessness.

Between Culp’s speech, an interview with him after the event, and interviews with the Republican candidates for office in attendance, several distinct themes emerged in the sentiments candidates conveyed to pitch their campaigns.

Culp, along with several candidates for office at the rally, described their campaigns as harbingers of change. By the candidates’ account, the voters they seek to court are dissatisfied with representatives who prioritize party interests over local issues.

My message of individual freedom and liberty is resonating with people. Getting our government back within the confines of the constitution and respecting citizen’s rights to make choices for themselves is resonating across the political aisle,” said Culp in an interview after his speech. “We’re getting a lot of Democrats coming to rallies and emailing the campaign saying this is the first time in their life that they’re voting for a Republican. That’s because it’s a common sense message about returning individual liberty and freedom to citizens.”

Matt Larkin, the Republican candidate for Attorney General, maintained that he was happy to be challenging an incumbent: “I think there’s an energy where people are hungry for nonincumbents. I think people are looking for change and aren’t happy with the way things are going. I think being a new candidate brings that perspective.”

Davidson received about 150,000 votes less than his Democratic Challenger and Reykdal received a plurality of the vote, though two conservative candidates combined for a larger total number of votes.

Among the congressional delegation, only freshman incumbent Kim Schrier, Democrat representing the 8th District, appears to be vulnerable. In the same dynamic as the OSPI race, Schrier received plurality support but the Republican candidates combined for a larger share of the vote.

Schrier’s opponent, politcal newcomer Jesse Jensen, felt optimistic that the primary results in his race were an indication of dissasatifaction

The voters were tired of being lectured to for two years and they haven’t been represented…We were thrilled to keep her below 50 percent and were over the moon to keep her at 43 percent,” said Jensen. This is the inverse of what happened to Dino Rossi in 2018. The party that has lost the primary has not gone on to win the general election in over a decade in Washington State.”

During interviews, Culp and several of the candidates in attendance flitted about between issues of regular importance to Republican voters – such as gun rights and fiscal conservatism – and grounded them in the context of COVID-19 and protests against police.

“I don’t just point out the problems in our state, I point out solutions. And they are mostly just common sense solutions. We have to stop the bleeding. When we have a budget deficit in our family or in our business, we quit spending. We cut down on spending and we stop the bleeding. That’s what this state needs to do. We can’t raise taxes on citizens. We’re already overtaxed. This government has gone from spending $30 billion per budget cycle to almost $60 billion per budget cycle.”

Zeroing in on businesses, Culp, who was not wearing a mask, promised to issue an executive order doing away with all COVID-19 related state mandates on day one of his governorship.

The only candidate interviewed by the Wire who wore a mask during the rally was Jensen.

I’m wearing a mask, even in some of these larger gatherings where it’s probably not very popular to do so. I think we need to protects lives and we need to protect livelihoods in the COVID crisis,” said Jensen.

A former Army Ranger who went on to work as a Program Manager at Amazon, Jensen made the sort of gestures befitting of a candidate running in a swing district.

Speaking to the Wire in a side area not far from the stage – where former gubernatorial candidate Tim Eyman could be heard calling Gov. Inslee a snake – Jensen recounted a phone call he had with former Secretary of Defense turned Trump critic James Mattis:

While Jensen listed the Texas conservative Dan Crenshaw as the first person he’d like to work with in Congress, he also offered that he’d willing to sit down with Alexandria Ocasio-Cortez, the progressive firebrand from New York.

I would happily sit down with Alexandria Ocasio-Cortez, I think that she’s very passionate. She has some ideas that I really disagree with but I would love and welcome the opportunity to engage her intellectually on those ideas and find areas where we can agree.”

Rounding off his appeals to swing voters, Jensen touted an endorsement from the American Conservation Coalition, a right leaning environmental organization, and said he wants to work on “free market ways we can protect the planet.”

Culp, though, did not seek to project rhetorical moderation, especially on the subject of recent protests over police brutality.

Culp did say, however, that he believes George Floyd was “murdered.”

Staying true to his background as a Chief of Police for the city of Republic, Culp underscored his opposition to “defunding the police” and gun control legislation.

Culp rose to statewide prominence as a Police Chief after he refused to enforce voter-approved I-1639, which tightens rules governing gun ownership and purchasing requirements. Highlighting Culp’s refusal to enforce the law, his campaign website says, “If we would have had police that stood by this principle to do what is right and protect citizen’s rights, as Loren did, Rosa Parks would not have been taken to jail and millions of Jews would not have been sent to their deaths.”

Culp was not the only only candidate to offer historical comparisons. Jeffrey Beeler, the Republican challenger to Suzane DelBene in the 1st District, said that swing voters – who he estimates comprise about 20% of the electorate – have been perturbed at the sight of recent protests.

When asked for their thoughts on Culp, several candidates the Wire spoke to said that Culp ran a surprising campaign that resonated with the state’s Republican base.

One candidate was particularly plainspoken in voicing his support for Culp,

“Well, I think Loren Culp is a proponent of freedom.”