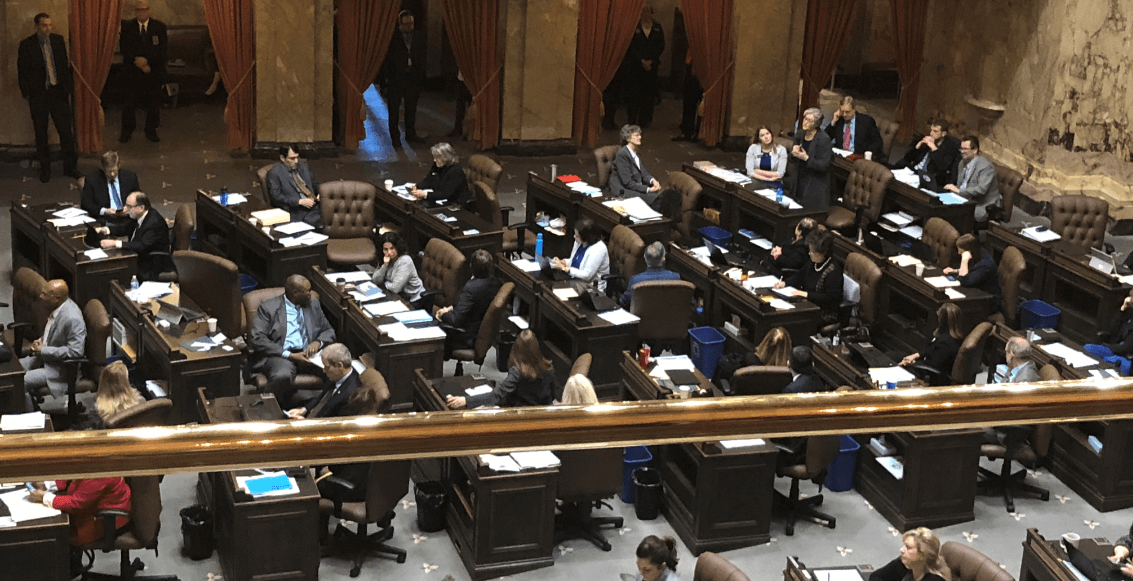 The House passed the Long-Term Care Trust Act off the floor Thursday in a 63-33 vote. If the bill makes it through the Senate and into law, Washington workers would pay into a trust and, eventually, become eligible to receive benefits if they have difficulty completing tasks of daily life.

Under the bill, Washingtonians who work at least 10 percent of full-time would be required to pay 0.58 percent of their wages into the trust program starting in 2022 — self-employed people could opt in.

Supporters of the bill refer to the 0.58 percent as a “premium” while those in opposition sometimes refer to it as a “tax.”


Workers who pay in for either three years within the last six, or for a total of 10 years including five uninterrupted years, would become “qualified individuals.”

Then, if the Department of Social and Health Services (DSHS) determines they need the help with at least three activities of daily living, they would be eligible to claim benefits. Ultimately, the benefit could total $36,500 over time and could increase by three percent per year, subject to the approval of the program’s commission made up of lawmakers, stakeholders, and agency representatives.

Rep. Laurie Jinkins, lead sponsor of the bill, said that there are currently 850,000 unpaid family caregivers in Washington State, and that the bill is addressing a crisis.

“Our state and our nation is in the middle of a crisis when it comes to long-term care,” Jinkins said. “Nearly all of us are going to need some sort of long-term care as we age. But 90 percent of us do not have the resources to pay for that long-term care.”

The bill is rooted in a study funded by the 2015-17 Operating Budget and conducted by Milliman, an actuarial firm. Milliman modeled a public benefit like the one in this bill against a public-private reinsurance model.

“The actuarial study that came back said: 1. Doing that would be more expensive than what we’re doing in this bill, and 2. Even after we did that and spent all that money, they could not guarantee us that we could ever stabilize the private, long-term care insurance market,” Jinkins said.

Milliman also found that, since Medicare doesn’t usually cover long-term care services, people often pay out of pocket until they “impoverish themselves to qualify for Medicaid.”

According to the study, a public benefit could generate $898 million in savings in the 2051-53 biennium, but Rep. Drew Stokesbary argued during debate that savings from the bill wouldn’t be worth it for Washingtonians.

“The 2050 savings to Medicaid are something like $500 million,” Stokesbary said. “Make no mistake, that’s a lot of money. But when you assume our 4-percent budget growth out to 2050, our state budget is going to be about $200 billion…Yes that’s a lot of money, but I’m not sure that forcing a mandatory tax on all Washingtonians for the rest of their working life to merely defer the length of time that people end up on Medicaid is the best solution to this problem.”

Jinkins’ bill received all positive testimony during its public committee hearings. In debate, though, many representatives argued against it. Some, like Stokesbary, critiqued the plan design from an actuarial standpoint.

Stokesbary argued that people who earn more or pay in longer would be subsidizing the program for the rest of the state. Later in the day, he summed up that argument.

“Under this system, everybody gets the same benefit regardless of how short or long they work for, and regardless of how much they earn,” Stokesbary said. “There just has to be winners and losers. We’re not pulling money out of thin air. Some people, the people who have lower wages or work a less amount of time, will get more money out than they pay in. In order for that to pencil out, the people who work a longer amount of time or for higher wages will get less money out than they pay in.”

Generationally, he said that works out so that people who are about to retire now will be funded by people who are just entering the workforce and don’t have a choice in the matter.

Other critiques included that people from other states would move to Washington and take advantage of the system after paying in the minimum amount for the minimum amount of time (working a minimum-wage job for four hours per week for three years), and that the benefit isn’t large enough to be a real fix.

AARP Washington came out in opposition to last year’s version of the bill, but in support of this year’s because of its increased flexibility in how the benefit can be used. The organization’s Advocacy Director, Cathy MacCaul, said that the bill isn’t meant to fix the system entirely.

“The Long-Term Care Trust Act was never considered as the be-all, end-all solution,” MacCaul said. “It’s not enough money. We know for a fact that there’s a huge disparity about how much it costs. But it really does give that person that maybe needs some assistance, just for short-term, to be able to have that assistance and that support. So that they don’t have to go into a more complex care setting that’s even more costly.”

Rep. Drew MacEwen, one of the sponsors on the bipartisan bill, defended the bill’s math in his testimony. The example he gave: A person making $100,000 a year would pay in $580 a year to the trust, then could get $36,500 in benefits. He also said that he’s seen the private long-term insurance market change in his 20 years as a financial adviser.

“At the end of the day, again, the benefits that you will receive are far greater than what you’re going to pay in a premium than anything you can get on the private market,” MacEwen said. “And I’ll take those odds. None of us would think about not having an insurance policy on our house. And the odds of your house burning down are one in 12,000. But the odds of you needing long-term care are one in four.”

Stokesbary introduced an amendment that would’ve added a referendum clause so that the bill would depend on voters’ approval, which the House ultimately voted down. In debate, Jinkins argued against the amendment, in part, by positing that the matter is urgent.

“The stress and the pain and the suffering of families right now, combined with the financial stress on both families and our state budget has made this into a crisis,” Jinkins said. “We should’ve done this a long, long time ago. But we’re doing it now.”

The bill now moves to the Senate, where a companion bill is in Ways & Means.