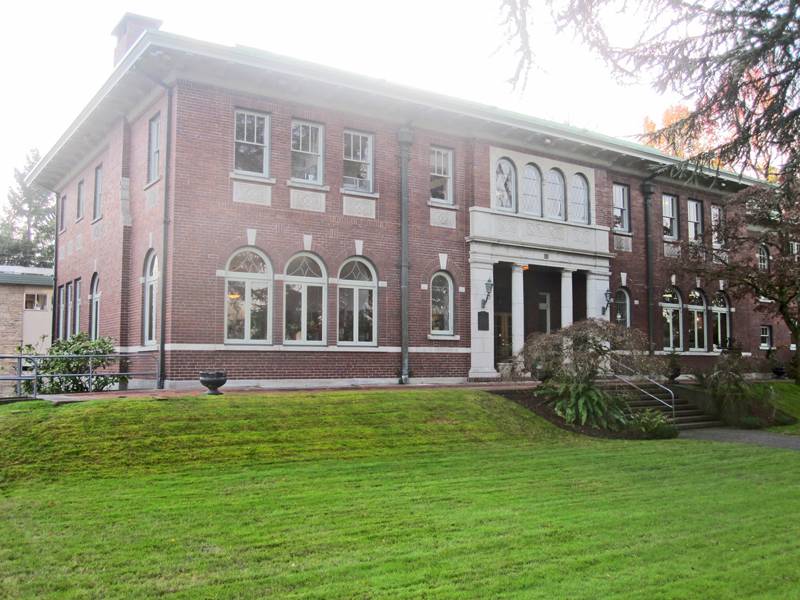 BIAW Asks Court of Appeals to Publish Ruling – Could Mean Every Association, Activist Group and Labor Union Would Have to Report Income and Expenditures to PDC, Politics or Not 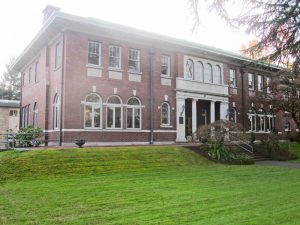 Headquarters of the Building Industry Association of Washington, the historic McCleary mansion in Olympia just south of the state Capitol.

OLYMPIA, Nov. 27.—Looks like there’s plenty of fight left in an all-but-forgotten lawsuit that aimed to squelch political activity by the Building Industry Association of Washington. A clever counterattack from the homebuilders could embroil every organization active in Washington-state politics — left, right and center.

With a motion filed last week, BIAW is broadening the stakes in a four-year-old lawsuit filed by political adversaries that aimed to prevent the Republican-leaning trade association from spending big money in future elections. BIAW is asking the state Court of Appeals to publish a ruling it issued last month that the organization itself might be considered a political action committee, subject to all the stringent reporting requirements imposed by the state Public Disclosure Commission.

It’s a backhanded way to call attention to a decision that BIAW considers absurd. By publishing the unpublished decision, the court would add the ruling to the canon of state law, and it would apply to every organization that raises money to elect politicians. Every trade association, every environmental and political-activist group, and every labor union that operates its own PAC could be required to provide a full accounting of its activities to the PDC, right down to the guy who runs the leaf blower in the parking lot.

Fair’s fair, BIAW says. That’s how the decision could affect BIAW. “The thing is that if they are going to make an interpretation like no other court or agency has done, then they need to stick by that,” said Art Castle, BIAW’s executive vice-president. The organization also has filed a separate motion asking that the court reconsider its decision.

Thus a legal assault that was hailed by many on the left side of politics when it was launched five years ago may become a case of be careful what you ask for, you just might get it. Certainly BIAW’s motion could affect some of the biggest business-community players in Olympia, from the Association of Washington Business on down. It could require every individual business that operates its own PAC to reveal financial information it now holds confidential. But it also could affect left-leaning activist organizations like FUSE Washington, one of the biggest cheerleaders for the legal attack on BIAW. Just like the homebuilders, FUSE could be required to present an accounting to the Public Disclosure Commission, revealing where its money comes from and where its money goes. 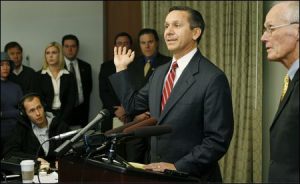 On the eve of the 2008 election, Republican gubernatorial candidate Dino Rossi was forced to make the “perp walk” for the TV cameras on his way to give a deposition in the case.

The court’s decision last month revived a long-running lawsuit that most had given up for dead. Activist attorney Knoll Lowney, who has made a career of take-no-prisoners cases with political aims, filed the suit in 2008 on behalf of two former Supreme Court justices, Robert Utter and Faith Ireland. The suit argued that BIAW had illegally plotted campaign strategy with Republican gubernatorial candidate Dino Rossi just before it spent $6 million on an independent campaign. It also contended that BIAW itself – not just its political action committee – ought to register as a political action committee.

At time it was filed the suit had the potential to pack quite a wallop. These days the homebuilders aren’t the players they used to be, due in part to the collapse of the construction industry and changes to the state workers’ comp “retro” program that have reduced revenue to trade associations like BIAW. This year the organization spent just $800,000 on political campaigns, for independent expenditures coordinated by others. But back when it all started BIAW was one of the biggest-spending organizations in state politics, rivaling Democratic powerhouses like the Washington Education Association and the state Labor Council. Lowney’s all-out assault aimed to keep the once big-spending organization off the field of political combat, or bankrupt it completely. 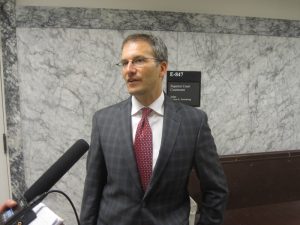 It was an infinitely complicated legal attack. It began with a 2007 lawsuit concerning allegations of minor bookkeeping violations worth roughly $350. Lowney sought $98 million in damages. After years of litigation a Thurston County court finally agreed BIAW needed to make a few changes in its accounting practices, but it awarded no money. Nor did Lowney obtain an injunction prohibiting the group from spending money on behalf of political candidates in 2008 — perhaps the more important goal. Yet BIAW estimates that it has spent a total $5 million in its defense, money that might otherwise have gone to campaigns. Meanwhile, some 70,000 documents generated by discovery in that case provided ammo for a new campaign-violation charge — that BIAW had failed to report fund-raising activity for Rossi in a timely fashion back in 2007. BIAW wound up paying a $242,000 fine to the state. The same charges were at the heart of Lowney’s separate lawsuit on behalf of Ireland and Utter. And at the peak of the litigation, on the eve of the 2008 election, Rossi was forced to give a deposition and parade in front of television cameras – one possible factor in his loss. Lowney used none of the testimony in the case; the whole thing fizzled after the election; the PDC conducted an independent investigation, nothing was ever proved.

It looked like that suit had come to the end of the road in December 2010 when King County Superior Court Judge Mike Heavey tossed it out on summary judgment, with prejudice – a rather resounding rejection meaning no trial was needed and the case couldn’t be re-filed. But both sides appealed. BIAW wanted attorney fees and Heavey said no. Lowney wanted the decision overturned.

And now, nearly two years later, the case has come roaring back to life thanks to the appeals court ruling. The 2-1 decision held that Utter and Ireland had a worthwhile argument, that a trial ought to be held and that BIAW didn’t deserve its money back. But the ruling itself also was startling. The court offered a brand-new interpretation of campaign finance law that could affect every organization in the political industry.

Parent Organization Can be a PAC

The appeals court concluded that an organization with its own PAC can be considered a PAC all by itself, without much rigamarole. Until this point, the rule had been that reporting requirements could be imposed on a parent organization only if it “financed, maintained or controlled” a political action committee and “a primary purpose” of the organization was electoral activity.

Over the years the PDC has developed rules to determine whether electoral activity is a primary purpose, but suffice it to say that most organizations with their own PACs have other primary purposes and are themselves exempt from reporting requirements. BIAW, for instance, maintains that its core functions involve services for its 8,500 members – insurance, workers’ comp programs, education, lobbying and other member programs. In BIAW’s case, there was even an additional layer of insulation. Its ChangePAC was run through a subsidiary company, BIAW Member Services Corporation, which operates its workers’ comp program. Decisions came from the top, of course, but that was no different than any other organization.

In its decision, the Court of Appeals agreed that electoral activity was not BIAW’s primary purpose. But it said that didn’t matter. Obviously BIAW “financed, maintained or controlled” its own PAC. And while electing Dino Rossi might not have been a primary purpose of the organization, strictly speaking, it certainly was an important matter to BIAW at the time. The court said that’s what counts. The ruling, written by Judge Michael Spearman, says, “There is evidence from which it might be inferred that supporting Rossi’s campaign was a top priority for BIAW leading up to the 2008 election and that BIAW made significant efforts toward that end.” So one might conclude that BIAW itself was a PAC – and that made the issue worthy of trial.

BIAW attorney Rob Maguire of Davis Wright Tremaine says every organization active in politics ought to be very worried. “I think the way the Court of Appeals has phrased this, it is just going to pose a lot of problems for a lot of non-profits and a lot of community organizations that use separate PACs for their electoral activities. It will collapse the distinction. I don’t have a laundry list of the specifics, but I’m guessing those groups would include the Washington Education Association, the state trial lawyers’ association, Planned Parenthood conceivably – all sorts of groups. I think people would be surprised by this. It could lead to quite a collection of organizations with very different political agendas all having a shared interest in having this decision reversed.”

Or even in having the Legislature pass a law next session that would make it clear that the old way of doing business is the way things ought to be – and incidentally plucking the thorn from BIAW’s side. In a dissenting opinion, Judge Kenneth Grosse wrote that the decision opens the door to similar costly citizen-action lawsuits against any organization active in politics. He noted that a similar campaign-reporting lawsuit was filed against the WEA a decade ago by the Evergreen Freedom Foundation, “a case different only in trying to pluck a different goose. Nothing is accomplished in either case by adding a civil suit to the mix, except whatever political advantage comes from the filing of the suit. On these facts a successful suit would only result in the burdensome and largely irrelevant requirement of detailed reports by entities such as the BIAW and WEA, already reporting through identifiable subentities. Frankly, this should be fixed.”

One can only imagine all the mounds of new reports that would have to be processed by the state Public Disclosure Commission. Right now, for instance, there are 533 single-year and ongoing political action committees listed on the PDC website, and for nearly every one of them there is a business or an organization behind it that would have to reveal its internal financial data publicly — every dollar of income and every dollar spent. Spokeswoman Lori Anderson says there might be ways for organizations to segregate some data that serves no public-disclosure purpose. But the Legislature would probably have to beef up the agency’s budget. “We may not have the staff to deal with the reports in question,” she said. “We’re kind of at our limits now with the reductions to our staff.”

But first things first. Because the opinion is “unpublished,” it affects only the BIAW case, not the state as a whole. And while BIAW’s motion for publication might strike some as cheeky, the association clearly aims to make a point none of the state’s powerful political contributors can ignore. BIAW argues that the decision represents a radical rewrite of the law, and the state’s politically active organizations deserve clarity. “Under the law as extended by the opinion, more organizations that choose to speak in support of or opposition to candidates or ballot propositions, as well as many organizations that merely support or associate with entities that engage in such speech, will likely be forced to litigate with political adversaries about whether political committee reporting obligations apply,” the motion says. “Greater uncertainty caused by an unpublished opinion will only increase wasteful litigation.”

Or you might say misery loves company. Says Castle, “If this court is going to rule like no other court or agency has ruled before, then perhaps it ought to be broad-based.”