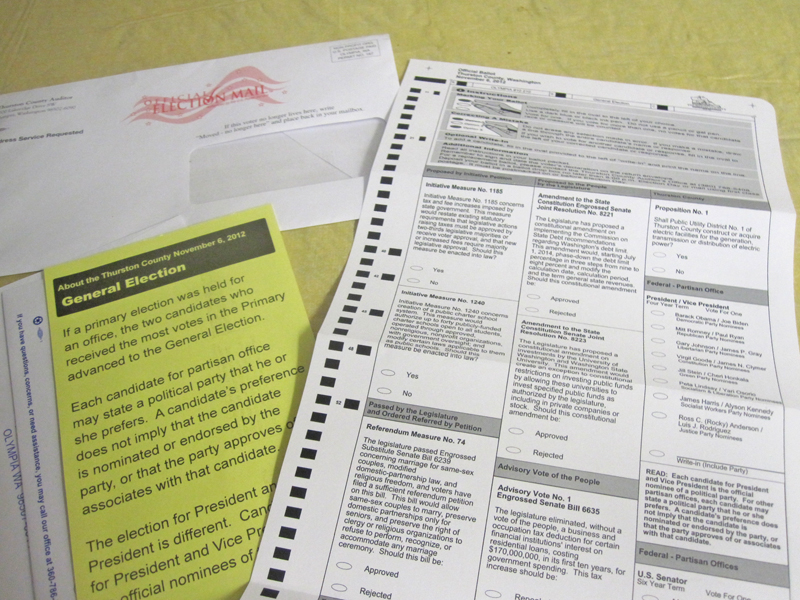 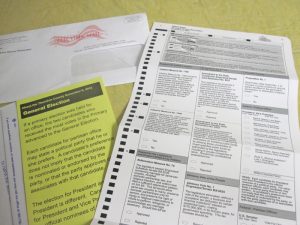 One of the 3.9 million ballots mailed to Washington residents in the state’s first all-mail presidential election.

OLYMPIA, Nov. 6.—And now it’s here at last, the day that will settle all the questions that have been posed during Washington state’s long march to the election. Will Republicans this year manage to break the Democrats’ 28-year lock on the governor’s mansion? Will Washington become the first state to legalize gay marriage and marijuana? And will it become one of the last to legalize charter schools?

There’s also a race for president. Maybe you’ve heard about that.

Just don’t expect any quick answers. At the very least, the race for governor is looking so close that it likely will not be decided tonight. This is the first presidential year that the entire state will vote by mail, and only about 60 percent of the ballots are expected to be run through the machines when county officials make their first count starting at 8 p.m. Ballots will be counted as long as they are postmarked by midnight, and they can be expected to trickle in to county elections offices over the coming week – and even longer than that, in the case of military and overseas ballots. Meaning that the long march might be over, but the long count is only beginning.

Washington elections officials are predicting that some 81 percent of Washington’s 3.9 million registered voters will cast ballots in this year’s election, a slight dip from the 84.6 percent recorded in 2008.  In some areas participation is expected to be higher – Snohomish County is projecting 85 percent, due to the white-hot race in the 1st Congressional District. Thurston County, center of state employee-dom, projects 87 percent.

At the top of the Washington-state ticket is the race for governor, a contest begun more than a year ago when Attorney General Rob McKenna and former Congressman Jay Inslee launched their campaigns. The hard-fought contest could end the nation’s longest current single-party winning streak, and while it is hard to imagine that it could be any closer than the 2004 race between Gov. Christine Gregoire and Republican Dino Rossi, ultimately decided by 133 votes, polls seem to show that it is down to the wire.

Add to that a heated race for attorney general between Republican Reagan Dunn and Democrat Bob Ferguson, at least five pitched battles in the state Senate, and too many contests to count in the state House. Then two landmark ballot measures – Initiative 502, which would legalize marijuana, and R-74, which would ratify the gay-marriage law passed by this year’s Legislature. And a third, I-1240, which would make Washington state the 42nd state to allow charter schools, and a fourth, I-1185, which would reinstate the popular rule that requires a two-thirds vote of the Legislature for tax increases. Polls show all four measures hovering just ahead of even. Looks like the Washington election might provide entertainment for weeks to come.

A memo from the campaign staff of Republican McKenna offers a guess at the twists and turns ahead. Campaign manager Randy Pepple is predicting that Inslee will be top vote-getter on election night, but the lead will shift to McKenna when the last ballots are counted. The guess is based on public polls and internal tracking polls indicating that early voting skewed toward the Democrats by a couple of percentage points. About 44.4 percent of the electorate has already returned ballots that have been validated by county elections officials, and the McKenna campaign surmises that a slight majority of the ballots that will ultimately be counted were filled out five or more days before today. But internal tracking polls indicate a surge for McKenna toward the end of last week, and the campaign maintains that the Democratic advantage will be reversed when the late-to-arrive ballots are counted.

The key point? Assumptions based on old conventional wisdom about absentee balloting no longer hold under Washington’s new by-mail voting system. Now it’s the Democrats who are voting early, not the Republicans. Says Pepple, “once again it appears that election night in Washington state will not produce a winner in our marquee statewide contest.”

One reason to think the final ballots will skew to the Rs: The secretary of state’s office reports that some 57,000 ballots have been issued to overseas addresses, most to military personnel – and they tend to lean Republican.

Maybe the most surprising thing about this year’s election, wizened observers say, is that there were no surprises. In the final five weeks of this year’s gubernatorial race no stunning new issues emerged, and  instead Republican McKenna and Democrat Inslee kept plugging the themes they started with. Inslee talked about his plan to promote “green jobs” and insisted it would send the economy roaring to the point that the state would be able to avoid a tax increase – though he never did provide any dollar figures. And McKenna argued that the state could manage by capping non-education spending and shunting natural growth in existing tax revenues to K-12 and colleges and universities.

The most striking thing about the campaign was that the Democrats’ “war on women” theme never really caught fire, said political consultant Chris Vance, a former chairman of the state Republican Party. “I think the big surprise here is that the Democrats thought they could do to Rob McKenna what they have done to every other Republican, and that is to blast away with their typical messages, aimed at women, mostly on social issues, and try to paint the Republican as an extremist.

“The reason it didn’t work was that the McKenna campaign responded in a different way than campaigns normally do. Normally if you are a Republican, you’re going to get hit with these things that everybody knows are coming, on abortion and women’s healthcare, and you try to fire back on issues that we are strong on, like taxes or character issues, or the idea that you need change in Olympia. That’s what Dino tried to do. But McKenna did something very new and very different, and that is they spent most of their money on ad after ad of Rob McKenna and his wife and his daughters, looking into the camera and saying, ‘I’m not who they are saying I am. I’m a good guy. You can trust me. I’m not a bad guy.’ A lot of Republican insiders were skeptical that it would work, but I think it has. And that is the big surprise here. The Democrats threw their Sunday punch and the McKenna campaign blocked it in a different way than Republicans have in the past. …And I think the Democrats are stunned that they spent all these millions of dollars trying to destroy Rob McKenna and disqualify him in the eyes of voters and it failed.”

And of course Democrats beg to differ about the conclusion. Consultant Paul Berendt, a former state Democratic chairman says Inslee made huge headway when he began running well-produced ads over the summer that introduced himself to the public and established an advantage McKenna couldn’t overcome. In the final weeks of the campaign Inslee tried out a few new arguments – attacking McKenna for supporting a complicated school-finance plan that will raise some people’s property taxes while lowering others’, dubbing the Republican an “Olympia politician.” But Berendt says neither really stuck, and no argument is as important as Washington’s fundamental tilt toward the blue. “Other things were more important. Jay has run on his profile; he has run on his record, his clean-energy jobs program. If Jay wins, and I believe he will, it will be because people believe he has a jobs program. McKenna really stuck with traditional Republican themes, less government regulation, support for small business.

“This has been a year that campaigns really didn’t make a difference. I don’t think there has been some decisive issue since Labor Day that has made me think, oh, that’s the big issue in this campaign. Honestly, I’ve been kind of watching both campaigns, wondering what’s going to be the final punch, and in neither case we really didn’t see it.”