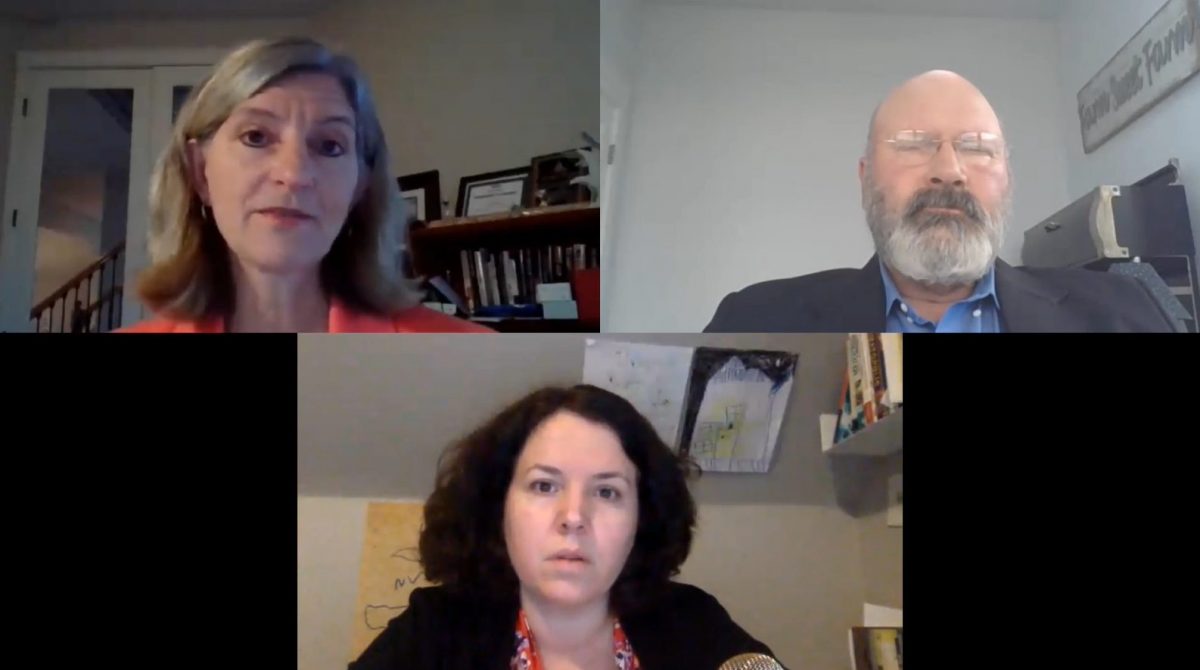 A bipartisan panel of legislators convened at the 2020 Re-Wire Policy Conference to discuss the impact of geography and cultural divides on the politics of Washington State.

In the 2020 election, these three members all scored narrow victories in competitive re-election battles. The 10th and 42nd LDs are two of only four districts in the state with divided representation in the Legislature.

In a moment when swing districts are few and far between, the legislators shared their perspective on how to build consensus and continued broader political clashes over terminology.

Legislators on the panel conveyed a sense that misunderstandings over political terminology often obscure the extent to which Democrats and Republicans actually agree on policy.

Shewmake recounted a conversation she had with her former seatmate Luanne Van Werven, a Republican, while they carpooled back to the 42nd District after a day at the Legislature.

The descriptions of the nonpartisan bills we had were just so different between the caucuses. So I wonder if part of this is also needing to talk to each other a little bit more one-on-one about the way we see the bills and some these issues, and to diffuse some of the tension,” said Shewmake.

Muzzall concurred with Shewmake’s point that many political disputes are linguistic in nature. Going a step further, Muzzall said that these disputes can amount to a “marginalization” endemic to modern politics.

I think you’re absolutely right. Dialogue is about mutual respect. If we’re going to have productive dialogue, we’ve got to avoid inflammatory speech. We’ve got to avoid generalizations,” said Muzzall. “That’s the most frustrating thing: the marginalization that comes with that. And we saw that in this last election. I saw people who looked at me, and I am who am; I can’t impact my lack of hair, I can’t impact my size; I can’t impact my cultural upbringing because I was brought up on the farm, I can’t impact those things. But they looked at me and they looked at the ‘R’ behind my name and there were times, I couldn’t believe their misconception of me just based on outward appearance and the fact that I had an ‘R’ behind. There was no getting past that. And that impasse, that is the crux of the problem we’ve got going forward.”

Underscoring the way in which disputes over terminology are often born out of misunderstanding, Shewmake offered an example of how Democratic voters might take issue with applying the word “marginalization” to one’s party affiliation.

When you talk about feeling marginalization because you’re a Republican. People of color and LGBT folks have felt that for a long time based on who they are inherently, not just what they think … That conversation, just so you know, it doesn’t always sit well on the ‘D’ side because we’ve felt like we’ve been dealing with this too,” said Shewmake.

Shewmake said that having a clear sense of where colleagues stand on the issues is critical to building consensus. In the upcoming virtual session, she emphasized that regularly connecting with other legislators to hash out their positions would be more important than ever.

Broadband connectivity is a prerequisite for legislative dialogue, Muzzall pointed out. With the virtual session on top of the shift to distance learning, Muzzall anticipates that enhancing broadband connectivity around the state will be a top priority, and that it “may end up burning up a bunch of our capital budget to accomplish” in the 2021 session.

What Shewmake and Kraft agreed with the broader policy goal of expanding access to broadband, the question of how to do so provoked a dispute over the distinction between socialism and subsidies.

Kraft: The fact that the government is looking to move into broadband more fully, my concern is that I don’t want to see broadband become a utility for government. To me, I want to see that stay with the private sector. I think the competition is healthy.”

Shewmake: We dealt with this with electricity, we deal with this with railroads. We’ve seen natural monopolies in the past engage in this behavior where they make such a big capital outlay that really only supports one provider, which means they have their own little special monopoly. How do you break that up? Because that seems like a big source of inequity between urban areas which might be able to support multiple companies competing and the rural areas which might only have one option for service.”

Kraft: Those are some of the potential challenges with supply and demand if there’s only one provider, the supplier, they have the control over what the price is. So I recognize that. My other challenge though is subsidizing everything through the government, which is socialism. I’m not interested in that within an American economy. Our economy should be subsidized by all the taxpayers, and that is what we’re seeing in a very large way right now.”

Shewmake: I just have to push back; subsidies and socialism are not the same thing. Socialism is about owning the means of production whereas a subsidy is a way to use markets to achieve outcomes that we all care about. For example, we subsidize education. There are a lot of good benefits to subsidizing things that have a public benefit.”

Kraft: “This is probably back to your point about the terminology. It’s socialism. Subsidizing health care and broadband, or anything, the more you do it, even if it’s a good cause. That’s what socialism is; it’s when more taxpayer money goes to offset true supply and demand.”

Shewmake: I would just encourage you to look up the definition of socialism. They are very different.”

Expressing openness to comprise, Muzzall said he would consider looking at expanding retail authority to public utility districts as one potential solution.

All three panelists agreed that partisan politics have fomented a meanness in society at large.

We’ve got to start being nice to one another. This is really frustrating to me; the lack of respect that we are showing on another in our society. Yes we’re passionate, yes we have differing views, but that doesn’t mean that we should be jerks to one another.”