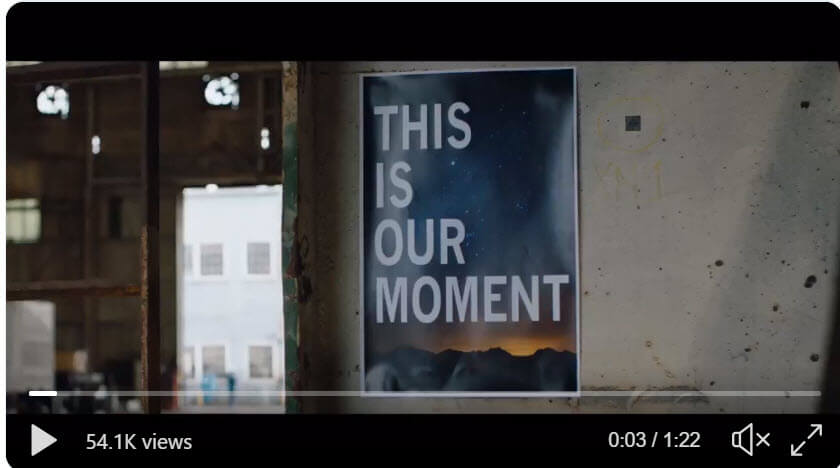 This morning, Governor Jay Inslee is announcing his candidacy for the Democratic nomination for President of the United States of America.

Earlier this morning, his campaign released a video making the case for his candidacy. It included a release of his campaign logo as well.

VIDEO: This is our moment, our climate, our mission — together, we can defeat climate change. That’s why I’m running for president. Join #OurClimateMoment today https://t.co/zg8ILGyk0Z pic.twitter.com/pUZVxyzfc5

For the national observers looking to get a handle on who Jay Inslee is and how he might run, there is a lot in this video to unpack.

1. Inslee often connects his vision to kids and to youth, which is prominent here, and which has been a long standing personal motivator of his.

It’s no surprise that a key pivot point here is that a young woman asks Inslee about climate change. On the one hand, this is a nod to the importance millennials place on the issue.

Inslee’s first step in to public life came as he and his wife ran a school levy campaign in central Washington. He talks about his three boys, their families and his grandchildren regularly. It’s baked into his candidacy and this video.

2. Job creation is a central pillar of this message.

Inslee doesn’t just think that climate change matters. He thinks it’s an opportunity to rebuild the economy. That message comes through his in both audio and video messages.

The closing image of Inslee at the Port of Seattle is powerful. It symbolizes good-paying union jobs that depend on an interconnected world. It shows a dynamic city skyline in the background that is home to Amazon and jobs of the new economy.

But this message isn’t new. In 2012, in Inslee’s opening spot where he campaigned for governor under the tagline of “Building a Working Washington,” Inslee made jobs the central part of his message then, too. To start that campaign, Inslee was down 15 points to Republican AG Rob McKenna. This messaging about jobs was a big part of what helped close the gap.

3. The use of old TVs shows how long Inslee has been talking about climate change.

It’s a solid but subtle way to demonstrate that Inslee isn’t “checking the box” on climate change, but that he’s been talking about this literally for decades.

There’s been plenty of press about Inslee running to be the “climate change president.” This shows that he was doing it well before it was such a prominent topic among Democratic primary voters.

4. The music, the pace and the tone convey energy, optimism and momentum. Those qualities are classic Inslee, too.

In video, the music and the pace of editing cuts is important in ways that most folks don’t recognize. If you look at how quickly the cuts are in the 60-second spot, there are 47 total segments. That creates a sense of movement and energy.

The music creates a sense of energy too, but one that is both optimistic and at times somber. One forgets music at their peril, and Inslee’s video uses it smartly.

I think the primary battleground in this primary race is California, where LA County alone will send more delegates to the 2020 Democratic Convention than 40 other states. And, in a nomination process that could well become a brokered one, given the rules changes this year, each delegate will be important.

Inslee spends a lot of time in this video with images of the damage from wildfires in Northern California, which has become a symbol of climate change. So, too, has Hurricane Harvey in Texas and flooded streets in Miami Beach. But those states aren’t nearly as important in the Democratic Primary as is California – and so there is no mention of them.

This is a good sign for Inslee. He will need to spend considerable time in California working that state – working, really, all four or five state-like regions there – far more than in any other presidential election year in 40 years in order to be successful. This video shows the campaign gets that point.

6. Inslee knows why he is running. That’s not something to be taken for granted.

There won’t be a Ted Kennedy moment a la 1980. Then, Kennedy was unable to give a coherent answer to the question of “Why are you running?” He sort of offered that it was his time following the campaigns of his two brothers in the 1960s.

But that logic wasn’t good enough. Since then, candidates have all had to convey clearly and at the outset why they are running for president. It’s actually been something of a challenge for Kamala Harris, who has yet to get a good answer down to that question. It’s a reason her early lead could dissipate by summer as voters continue to get to know her.

Bottom line: This is a good video. A campaign is not a launch video alone, but this does show some of the more nuanced elements we are likely to see from Inslee throughout his run for the nomination.