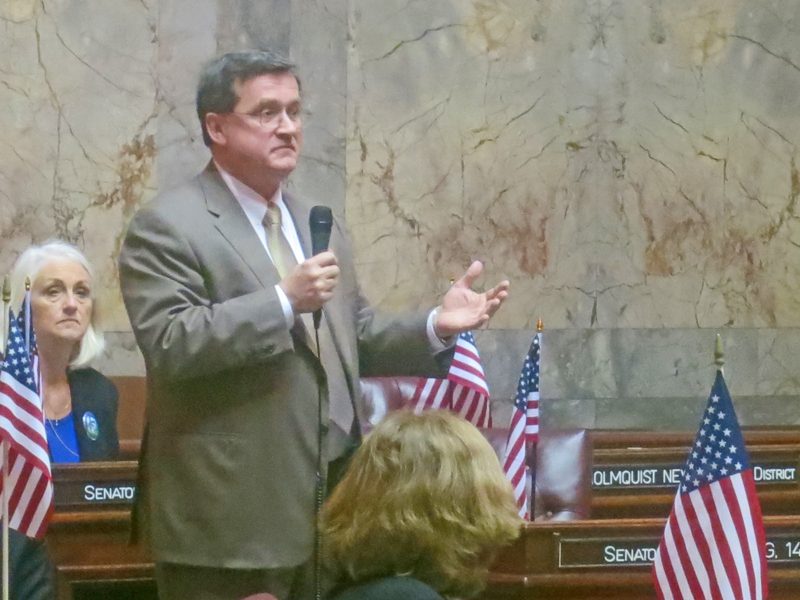 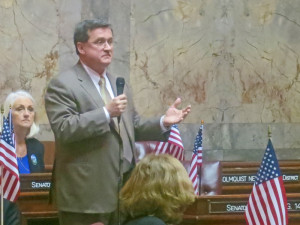 OLYMPIA, Feb. 4.—Bad news, transportation fans. A state senator is saying this doesn’t look like the session for a gas-tax increase. And while there have been plenty of lawmakers saying that all along, this one happens to be the leading advocate for a transportation package in the Senate.

State Sen. Curtis King, R-Yakima, co-chairman of the Senate Transportation Committee, said Monday it is about time to give up on the idea of a transportation package during the current legislative session. He says lawmakers ought to think about a special session sometime after Nov. 4. The problem is that nobody wants to take a tough tax vote before an election.

“I just don’t think there is a will on either side to really push this through,” King says. “There are a lot of areas where we have to iron out agreements. It is an election year and members are hard-put to vote for a gas tax increase or any sort of a tax increase and then go and face the voters. Especially when the polls on this one are as poor as they are.”

Lawmakers have been dickering about a transportation package more than a year now, and they seem to have come pretty close. To finance a big new package of road-construction projects, the first since 2005, they would raise the gas tax by something more than a dime. That and a series of other transportation taxes – truck-weight fees and others – would raise in excess of $10 billion. Lawmakers appear close on the project list. But those little niggling details — they’re killers.

No Agreement on Reforms 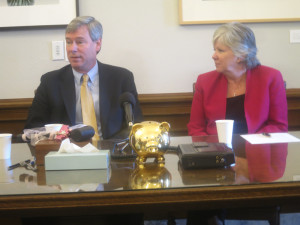 Whether you call it Republican stubbornness or Democratic intransigence, it really doesn’t matter, King says. The problem is that the legislative players haven’t been talking. “Here we are, starting the fourth week of the session, and we haven’t had a meeting on anything,” he says.

So the disagreements remain pretty much where they were when talks broke off in December. The biggest hitch is that legislative Republicans have been insisting on a series of reforms – or is it that Democrats have been resisting? All depends on the eye of the beholder.

Specifically, Democrats want to continue the current practice under which a share of gas-tax money is siphoned off into the general fund, by imposing a sales tax on construction materials. They also object to a proposal that would shunt costly environmental mitigation projects, such as stormwater drainage, into a fund that is financed by a different state tax, on hazardous substances. Those two measures would free up about $1 billion for additional road construction.

Other sticking points include the amount of money going to transit and bike paths, and reforms to state labor rules. And then there’s the Democratic governor, who appears to be hinting that he would like to impose low-carbon fuel standards on the state by executive order.  Gov. Jay Inslee signed an agreement with British Columbia, California and Oregon last fall in which he promised that the state would adopt the new fuel policy, and state regulators say he has the authority to order it. The problem is that it would increase the cost of gas by about a dollar a gallon, according to state consultants. Inslee has refused to promise that he won’t do it. “You can see why people are a little reluctant to vote on a gas-tax increase when there might be another dollar,” King says.

So plenty of responsibility to go around, he says.

King says he will present a new transportation proposal to the Senate Majority Coalition Caucus this week. The idea ought to be for both sides to reach an agreement sometime before the November election, so a transportation package could be passed immediately afterward.

King notes that public opinion polls appear to be overwhelmingly negative on the subject of a gas-tax increase. Publicly-released polls and those conducted internally all show the same thing – a gas tax increase has the support of just 30 to 40 percent of the voters. “That doesn’t surprise me,” King says. “You could walk up to anybody on the street and say the legislature wants to raise your gas tax 11 ½ cents – what do you think? The answer is going to be, well, I don’t want to give them any more of my money, I am struggling right now.”

Odds are voters could be convinced, King says – and that is a matter for the inevitable gas-tax campaign. Either lawmakers will refer the matter to the ballot or someone will run a repeal initiative. The state’s business community is confident that if the Legislature passes the tax increase cleanly, it can defeat a rollback measure.

But King says you can hardly expect lawmakers to want to be enthusiastic about taking a vote just before an election when 60 to 70 percent of the electorate appears to be opposed. In some districts it might be a campaign issue.

King’s idea will still have to be run through the various legislative-caucus leadership offices. The private response may be relief, but at least officially from Democrats, the public one is disappointment. Minority Senate Democrats note that the package is expected to produce 7,000 jobs a year, a total 80,000 jobs in 10 years. Democratic Leader Sharon Nelson, D-Maury Island, said Monday that yesterday is too late. “If this had already been in play we would already be hiring folks,” she said.

But King says it really isn’t fair to call it a partisan breakdown in which fault lies entirely on either side. “Believe me, if I was the decision-maker here we would have had this done a long time ago,” he says.