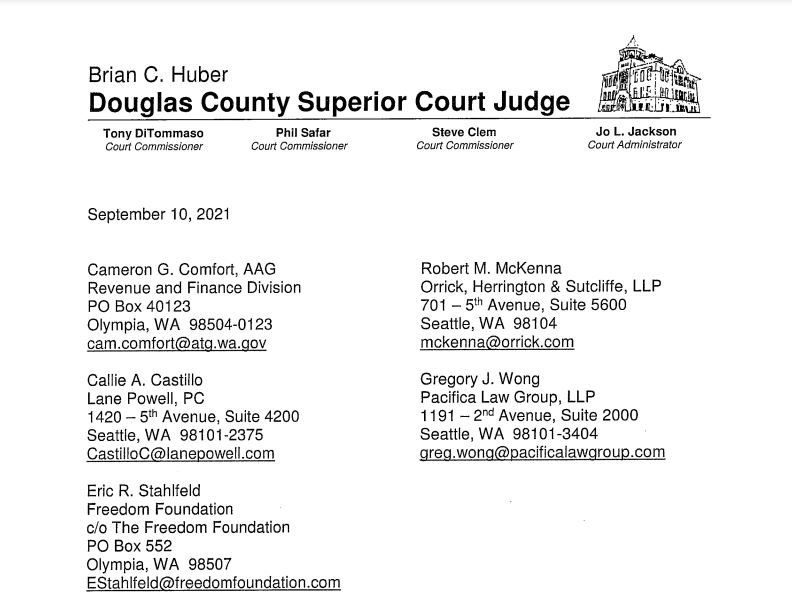 A pair of legal challenges to Washington State’s capital gains tax will be allowed to proceed after a Douglas County judge tossed out the state’s motions to dismiss and change venue.

The decision was announced on Sept. 10, and follows a hearing held on Aug. 18, which pitted former Attorney General Rob McKenna against lawyers from the state’s current Office of the Attorney General. The capital gains tax was passed by the Legislature last session, and levies a 7% tax on long-term capital gains in excess of $250,000.

The ruling, issued by Douglas County Superior Court Judge Brian Huber ruled against dismissing the lawsuits. In their arguments, Washington State’s lawyers argued that in order for the plaintiff’s claims to proceed, they had to show they were currently being harmed by the capital gains tax, and since it hasn’t gone into effect yet, there are no damages.

In his decision, Huber stated the following:

“The Plaintiffs in these consolidated cases, including the Washington Farm Bureau, have asserted that they themselves — or in the case of the Washington Farm Bureau, at least some of its 46,000 members — own property that is subject to the new tax statute and will be taxed if and when the property is sold. They have also asserted that the mere existence of the new tax statute has already lowered the market value of their property and forced them to make tax planning decisions that impact their financial interests in a way that is concrete and non-speculative. This Court finds no basis to suggest that these allegations are unreasonable.”

Huber also ruled that the state didn’t present a good enough case arguing that the plaintiffs couldn’t sue because taxes haven’t been collected yet.

Finally, Huber ruled that the state doesn’t have legal authority to force a change of venue to Thurston County.

“There has been no showing that the convenience of witnesses or the ends of justice would be forwarded by the change of venue,” Huber wrote. “… In short, no valid reason has been presented by the State to overcome the presumption that the Plaintiffs in this case are entitled to choose the forum for deciding the case.”

While it’s a win for McKenna’s clients, during previous hearings it was clear that both sides expect the case to be fully litigated.

The full decision can be read below: