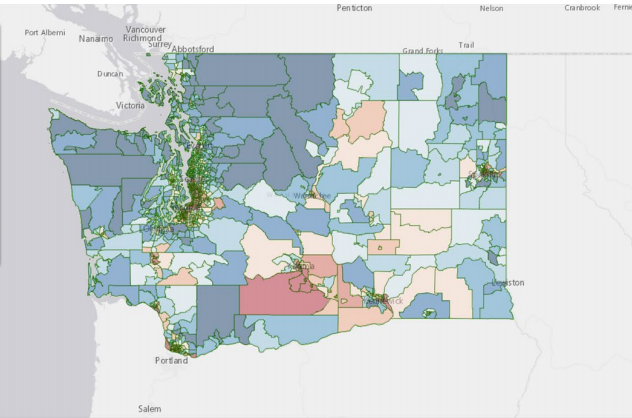 Jim Boldt: Environmental/Health Justice? What, Where and Why No Definition?

The Provision for The Environmental Justice Task Force:

A proviso in the 2019-2021 biennial operating budget (ESHB 1109, section 221, subsection 48) directs the Governor’s Inter-agency Council on Health Disparities to convene and staff an Environmental Justice Task Force (EJTF). The proviso outlines the Task Force’s membership and reporting requirements to the Legislature.

Sure, we all know that budget provisos are often the product of failed legislative attempts. Senate Bill 5489 came flying out of the Senate committee, over to Ways and Means, onto the Senate floor and swished over to the House by a 27 to 21 vote. Except for a few D’s on the “no” side, almost a partisan vote. (Is environmental justice a partisan issue?)

So, as is often the case, to make folks feel better about the failure, a little proviso was slipped into the budget directing some agency or “task force” to “study and report.” And, we all know that nine out of ten of these reports are DOA. This one has legs! Pay attention.

The first meeting of the uber organized EJTF was September 30. It was almost seven hours long. Seldom in my research or monitoring have I come across an operation as organized, or cleanly structured and directed as the EJTF.

You don’t have to wait for months and the final product to see what is going on in our state regarding negative environmental situations and proximity to certain communities (cultures) and socioeconomic strata neighborhoods. It’s there in the mapping project already finished by the U of W.  The mapping project follows the locations of dirty and unsafe places to live and work. The correlations are unpleasant to read.

If the EJTF produces but one thing, it may be a definition of “environmental justice.”

In America, environmental health issues came to the forefront in the late 1970s. But it wasn’t until 2007 (!) that the first Congressional hearing was held on the subject.

Finally, a federal definition emerged, yes codified.  In the EPA statute, “environmental justice” is defined as “…the fair treatment and meaningful involvement of all people regardless of race, color, national origin, or income, with respect to the development, implementation, and enforcement of environmental laws, regulations, and policies.”

This EPA website goes on to add that this “goal will be achieved when everyone enjoys the same degree of protection from environmental and health hazards, and equal access to the decision-making process to have a healthy environment in which to live, learn, and work.”

The entire EJTF meeting on the 30th was a cordial and serious event. Only once during the meeting did voices get sharp and bodies tense. Conflicts were few until John Stuhlmiller of the Farm Bureau mentioned that “my faith drives my life” and that the Task Force should strive for “solution-based work here” not just issues identification.

He then went on to suggest that the word “racism” be taken out of the proposed operating procedures.

I would not say that all Hell broke loose, but he did walk into a buzz saw. No one in the room supported the removal of “racism,” almost everyone opposed it.  Emily Pinchney of Tacoma dramatically said “We need racism in there.” She said they need to acknowledge the role racism has played in environmental inequity.  “We need to call it out…” Pinchney went on.

We are never sure what goes on in the minds of legislators. Or, in the case of the death of SB 5489, the minds of House leadership. Why did it fizzle on the House 2nd reading calendar that last two weeks of session?

Whenever proposed laws dictate equity and justice, a lot of people get a little nervous. Did the costs (which seemed to be OK’d by fiscal leadership) and implications of incorporating and evaluating environmental health issues in state public policy freak out the House leadership?

As Kamna Shastri highlighted in her post in The Seattle Globalist, this year’s HEAL Act (SB 5489) fell short of writing accountability for environmental justice to into state law.

However, Sen. Rebecca Saldaña says it brings the state closer to its final goal. “I do hope we will actually introduce in the future a policy that would actually put into statute environmental justice [and] include that framework to determine how we make investments, and what policies we put in place,” she said.

The Task Force is set to deliver a report to the legislature by October 31, 2020.

With the amount of data already available, and the energy and desire in the room, there is little question that the EJTF will produce a compelling case for a state, codified definition.