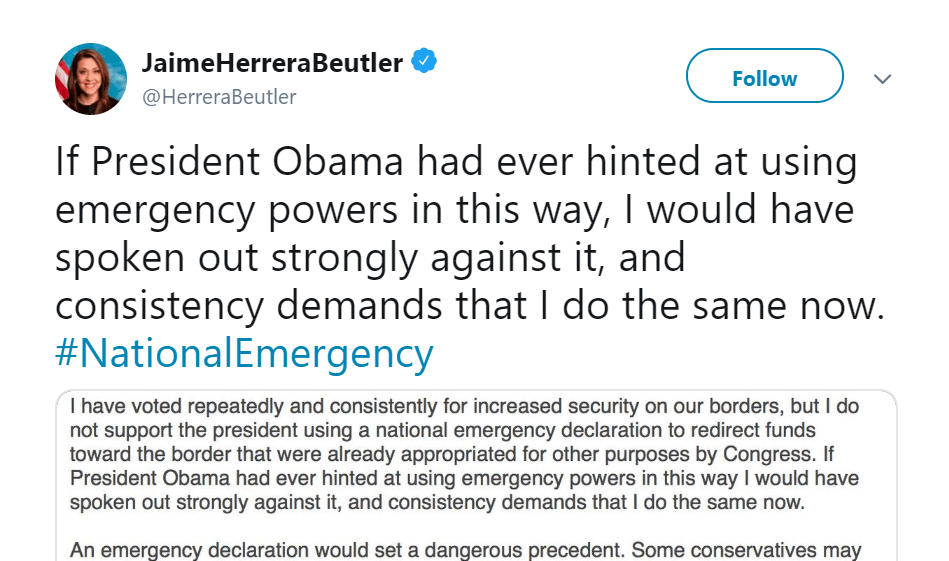 This press release was provided by the Office of U.S. Representative Jaime Herrera Beutler.

“I have voted repeatedly and consistently for increased security on our borders, but I do not support the president using a national emergency declaration to redirect funds toward the border that were already appropriated for other purposes by Congress. If President Obama had ever hinted at using emergency powers in this way I would have spoken out strongly against it, and consistency demands that I do the same now.

An emergency declaration would set a dangerous precedent. Some conservatives may cheer today, but someday it’s likely that the shoe will be on the other foot, and a liberal president would have the power to disregard Congress, declare an emergency, and enact whatever policy she sees fit. Speaker Pelosi, referring to this development, has already said, ‘Just think what a president of different values can present to the American people. A Democratic president can declare emergencies as well.’ What could the next president circumvent Congress to enact with emergency powers? Government-run, one-size-fits-all health care? A firearms ban? A Green New Deal?

Our government is a system of checks and balances, and declaring an emergency in such a situation would undermine that system in a way that even those of us who support strong border security may later deeply regret. I say that as one who has voted to meet and exceed the president’s $5 billion request for physical border security last June and in my role as an appropriator. Ultimately, it’s up to Congress to finally do its job and craft an immigration bill that secures our borders and fixes the countless other problems with our immigration system. We can’t let our frustration allow us to disregard the Constitution and its separation of powers.”