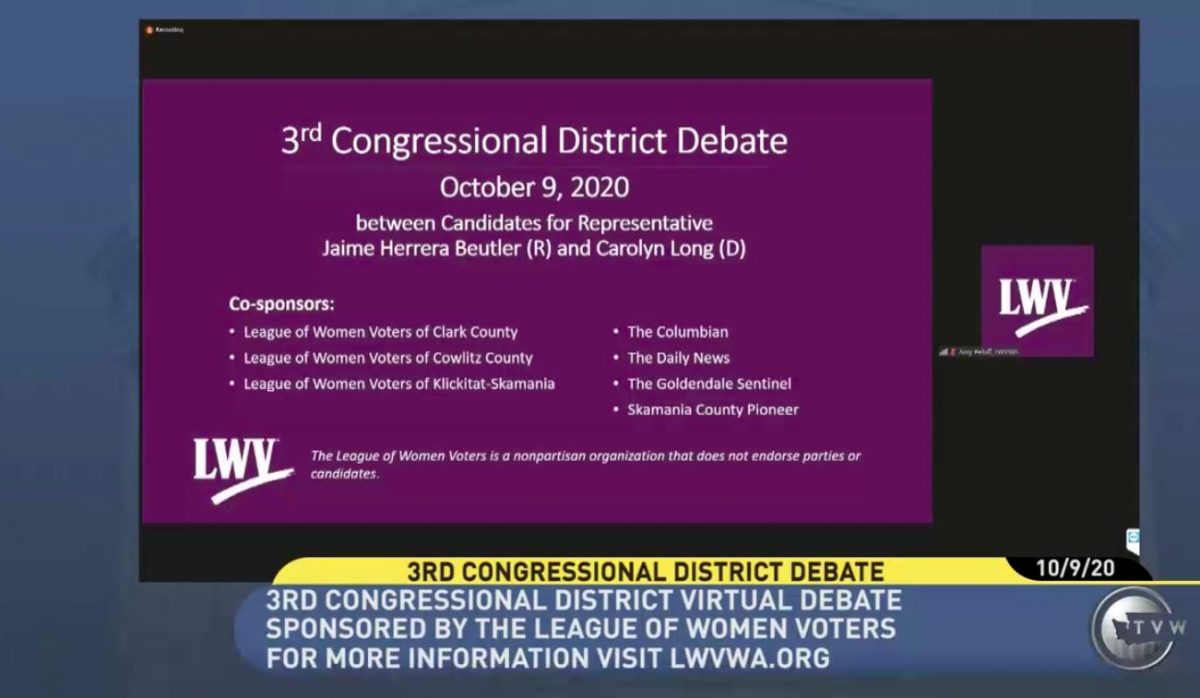 The candidates diverged on issues in a way that was largely reflective of the chasms between Democrats and Republicans nationwide.

In a rematch from 2018, Herrera Beutler is seeking a sixth term in office after prevailing two years ago by 5.4%.

Herrera Beutler faired strongly in the August primary, ultimately winning by about 17%, or 40,000 votes. But an internal poll released last month showed Long trailing by only two points. The WSU Vancouver political science professor is hoping the second time’s a charm.

This has been a really challenging year, both for this nation and for this state. The global pandemic has cost us lives and it’s also cost us a booming economy. We need to move back there. I believe I’m the best qualified candidate to help us get on the rebound and thrive,” Herrera Beutler said during her opening statement.

Long immediately attempted to define Herrera Beutler as a “career politician” whose votes in Congress are out of step with Southwest Washington.

My opponent is a good typical politician; a career politician. She sounds good and she tells you what you want to hear. She’s also good at hiding what she does in Washington D.C. with her votes…she might sound reasonable and factual but she’s not. In fact, her positions are very dangerous.”

On the economy, Herrera Beutler praised policies enacted by the Republican Party prior to the COVID-19 pandemic, specifically the “Tax Cuts and Jobs Act” passed by Congress in 2017, largely along party lines. The bill cut taxes for most Americans, the middle class included, but also heavily benefitted corporations and the wealthiest Americans. It slashed the corporate tax rate from 35 percent to 21 percent and has given billions in tax savings to millionaires.

Herrera Beutler also said she contributed to the Paycheck Protection Program (PPP) passed by Congress, which helped save jobs in Southwest Washington.

Health care, a perennially top of mind issue for voters, was a particular bone of contention for the candidates.

If Democrats won back control of the House, she would vote in favor of a Medicare for All bill, Long said in 2018. Since then, she has changed her position.

Long says she now supports passing a “Public Option to compete with private insurers and expand coverage while we work towards health care for all.”

In 2017, Herrera Beutler was one of 20 House Republicans to vote against the American Health Care Act, which would have repealed most of the ACA. But she has voted on several other occasions for legislation that consumer groups said would weaken the ACA.

On the environment, the candidates diverged in their opinion of the Paris Climate Accord, which the United States withdrew from under President Trump’s orders.

Herrera Beutler says the US needs to be reducing its carbon footprint and protecting jobs at the same time. She says she does not support the Paris Climate Accord because it is “paid for on the back of working class citizens.” Specifically, Herrera Beutler says the Paris Climate Accord will cost families in the district $20,000 – a number derived from a cost analysis circulated by the Heritage Foundation, a conservative think tank.

In the wake of recent wildfires, Herrera Beutler called for better forest management saying, “more trees are growing than we are removing.” She went on to say that “radical environmental lawsuits” have prevented the state from conducting adequate timber harvesting.

When the questions moved to the subject of extremist or white nationalist groups such as the Proud Boys – whom President Trump told to “stand back and stand by” at a recent debate – Herrera Beutler said that all forms of racism must be rejected, and that she was happy President Trump backtracked from his initial comments.

On this subject and several others throughout the debate, Long said Herrera Beutler hadn’t done enough to stand up to President Trump.

This is a situation where our members of Congress need to stand up to the President, not by sending a tweet or a strongly-worded letter, by calling his actions to account and doing so repeatedly. Instead what we’ve seen from the Republican Party and my opponent is somebody who has enabled this Administration to say these types of things and has enabled white supremacy in our communities.”

Discussing their infrastructure plans, both candidates said they support projects to update the Interstate-5 and the Hood River-White Salmon bridges. Long pointed to the “transformational infrastructure projects” included in her pandemic recovery plan while Herrera Beutler highlighted her position on the House Appropriations Committee, which she said is critical to securing funding for infrastructure projects in the district. Herrera Beutler also said the state needs to fight Oregon’s “unfair” tolling system.