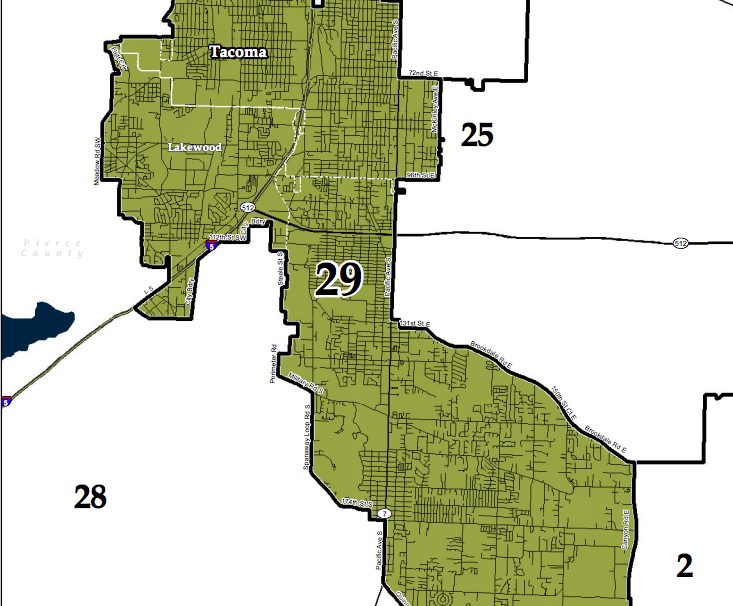 Given a weak effort by the Republican candidate to campaign in the stalwart Democratic district, it’s possible both Democratic candidates make it to the general election. This would create a very fluid contest in the 29th come November, should both Democrats move forward.

Among a crop of young candidates running for the Legislature this year, the 30 year old Mena is a Special Assistant to the Director of the Washington Department of Ecology. Formerly, Mena was Gov. Inslee’s Deputy Director for federal and interstate affairs. She also worked on immigration policy and web communications for New Jersey Congressman Albio Sires.

Kirby has been in the Legislature since 2001 and is the fifth most senior member in the House. Currently, he serves as Chairman of the Consumer Protection and Business Committee and sits on the House Civil Rights and Judiciary Committee, the Commerce and Gaming Committee, and the Committee on Committees.

Mena – who has embraced progressive policies like Medicare for All and a capital gains tax – has been endorsed by Congresswoman Pramila Jayapal and State Senators Claire Wilson and Joe Nguyen.

Raised in the Tri-Cities by immigrant farmworker parents, Mena graduated with a bachelor’s degree in Public Relations from Washington State University before deciding to enter politics.

Speaking to the Wire just under one month before the August 4th primary, she outlined the policy priorities that have defined her campaign thus far.

We’re entering head first into an economic crisis, so my first priority would be protecting the programs that help children and families, as well as looking at progressive tax reform that will allow us to fund them reliably in the future without burdening working people,” said Mena. “Going hand in hand with that, we have an affordable housing crisis. About 25% of residents in the 29th District pay over 50% of their monthly income in rent…so housing is a huge issue that needs a two-prong solution: confronting the current homelessness crisis and working toward prevention by raising the minimum wage and making sure we have sufficient childcare subsidies.”

Mena also said she’d like to focus on eradicating barriers to health care for low income and undoccumented immigrants.

Kirby, who did not respond to a request for comment, highlights on his campaign website experience in local government as well as stints sitting on a wide range of committees in the House:

In the House of Representatives, Steve Kirby’s extensive local government experience allowed him to bypass the usual ‘training period’ and he began making his mark right away. Today he has established a reputation as a seasoned legislator with a broad range of experience.”

Speaking to the Tacoma News Tribune (TNT) Editorial Board – who co-endorsed Kirby and Mena – Kirby said the current interlocking crises of COVID-19 a severe economic downturn have rendered legislative experience more important than ever.

This is not the time to replace all that institutional memory,” Kirby told TNT. “There will be a time for change. When I can’t string a sentence together anymore, maybe somebody might have to take the keys away from grandpa. But I’m telling you, we’re certainly a long ways from that.”

Prior to entering the Legislature, Kirby was elected to the Tacoma City Council 43 years ago at the age of 25 and served four terms.

Differering generational perspectives on leadership and consensus building may become a flashpoint in the race as the top-two primary draws near, and if both candidates advance to the November general election.

Mena said that her approach as a legislator would entail both representing the interests of the district as well as standing up for progressive priorities.

There are some issues that are not up for debate. The person I’m running against voted against marriage equality and cited that the initiative for marriage equality failed in the district. Anytime we come up against a policy that is threatening to take away someone’s civil rights or oppress a certain class of people, I think it is incumbent upon to lead by example,” said Mena. “In that sense, I think there’s something that polling can’t show you. There’s also a deeper issue here. Communities of color and low income communities have been disenfranchised and are often not represented in the electorate or the people we poll.”

Kirby voted with Republicans against the 2012 Washington State bill to legalize gay marriage, which went on to pass in both chambers and was signed by former Gov. Gov. Chris Gregoire. The bill was subsequently approved by voters in a statewide referendum.

Running against Kirby and Mena from the other side of the aisle is Terry Harder – a former leader of the 29th District Republican Party.

According to the latest PDC figures, Kirby has raised $98,893 in cash contributions, $33,700 of which came from businesses and $45,050 in political action committee (PAC) funds. He has raised just under $14,000 in individual contributions.

Correction: An earlier version of this article stated that Sen. Rebecca Saldaña had endorsed Ms. Mena, which is incorrect.