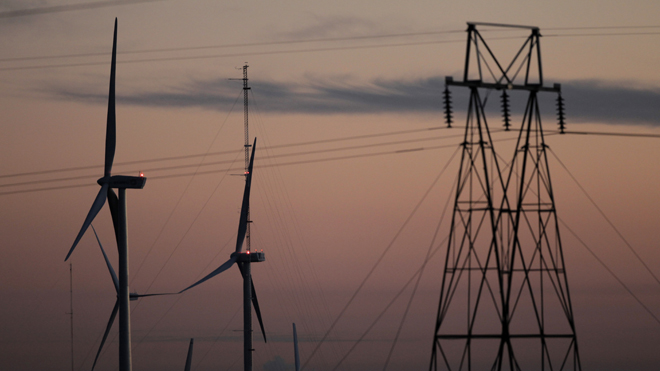 Gov. Jay Inslee released his long-anticipated carbon-emissions reduction program Wednesday, and it offered no surprise: a cap-and-trade program that would bring in $1 billion annually for schools and transportation projects, as well as tax credits for low-income families.

In a news conference held at the flagship REI store in downtown Seattle Wednesday morning, Inslee, flanked by Democratic lawmakers and Seattle Mayor Ed Murray, told a crowd of his supporters that reducing the state’s carbon emissions offers a “two-fer.”

One, it would get the state on track to meet its statutory requirement, which the Legislature put into place in 2008, to lower its carbon emissions to 1990 levels by 2020, and hit steeper reductions in 2035 and 2050.

The cap does just that — it sets a legal limit on the amount of carbon an industry or manufacturing sector is allowed to emit, and puts a price they’ll have to pay on the emissions. Allowances, or permits to emit, are bought and sold on the open market through an auction process, which is how the state would bring in revenue.

Secondly, it would bring in $400 million Washington could devote to fixing bridges or paying for roads projects, amounting to $4.8 billion over 12 years, or the same amount of 12-cent gas tax increase. Inslee also plans to put $380 million into schools per year, and $108 million a year for low-income tax credits.

And with that, Inslee delivered a key message to the Legislature for the upcoming session: Make the polluters pay for it. 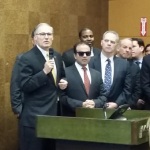 He also rolled out another long-awaited carbon policy proposal, a low-carbon fuels standard — he calls it a clean fuels standard — that would gradually decrease the carbon intensity of fuels Washington motorists put in the cars using blends of ethanol and biofuels.

He is directing the Department of Ecology to draw up a draft of a rule on adopting the standard, which could be similar to one California has put in place but is struggling to implement, as the steepest cuts in carbon intensity will largely depend on a form of biofuel, cellulosic, that’s yet to see wide-scale commercial manufacturing despite billions of dollars in government subsidies and private industry investment.

Inslee’s policy staff believe they can make adjustments to avoid the problems California has experienced. Whether that comes to pass isn’t certain, and Inslee didn’t spend much time addressing the clean-fuels standard proposal Wednesday. His staff caution that this isn’t the start of the formal rule-making process, but the draft will be used to solicit feedback from lawmakers, industries, and other groups.

He did say that there’s “a really good play” to eventually link a Washington cap-and-trade program to the one already in existence in California, which is also connected to Quebec, and possibly with Oregon, should that state decide to pursue one on its own. He said he wanted Washington’s to remain independent to start. “That’s for another day,” Inslee said of the potential for joining other jurisdictions.

But the low-carbon fuels proposal has been singled out by Republican lawmakers and business trade groups as potentially hiking the cost of gasoline by $1 or more, although his staff reject that conclusion and cite studies saying the impact would be minimal.

The carbon revenue, while desirable given the state’s funding needs for education and transportation, is not a magic-bullet solution. Inslee still has yet to roll out the remainder of his budget proposal, which he will do in Olympia this morning. Carbon, once the auctions begin in 2016, if it’s enacted, only adds $380 million to $1.2 billion in McCleary costs, $600 million in teacher salaries and pension payments, and another $600 million in salary hikes for state employees.

So what will he propose? Using Office of Financial Management Director David Schumacher’s budget briefing from last week as a guide, it will be a mixture of spending cuts, eliminating tax incentives, and new revenue. Inslee has already pitched $1 billion in new revenue, the amount Schumacher cited last week, but is there more in the offing?

Wednesday, Inslee was delivering a stern call to action to address Washington’s carbon emissions. The state is a low-carbon emitter relative to other U.S. states, accounting for less than 2 percent of the nationwide total, but a legislative task force found in 2013 that it was not on track to hit its target reductions, as required by the law.

Inslee said if the state doesn’t act in 2015, it won’t meet those reductions. He said it would amount to a missed opportunity to seize a leadership role in promoting clean energy and cutting pollution.

“We can build on our outstanding base of carbon-free hydropower,” Inslee told the crowd, which cheered intermittently throughout the speech. “I do believe it is Washington’s destiny to lead the world in clean energy. We recognize that there will be alarmist attacks to this plan. Their only hope…is fear. This is a choice we are making about our destiny. The only thing that is not an option is failure.”

INTO THE MURKY REALM OF POLITICS

With the conclusion of the speech — and to a greater extent with the budget unveiling Thursday — Inslee’s carbon policy plans now enter the legislative process. His Carbon Pollution Accountability Act will be introduced as a bill, without a shred of doubt in the Democrat-held House first.

Inslee’s spending plans for the carbon revenue don’t carve out hardly anything to go back to the affected industries and manufacturers, utilities and power plants. The state has one coal-burning power plant, TransAlta, which has already agreed to go offline in the next 10 years.

It also has a series of petroleum refineries throughout the Puget Sound region, an aluminum smelter in Whatcom County, pulp and paper makers, timber harvesting companies, construction firms, and agricultural producers throughout the state that would fall under a cap-and-trade program potentially.

Only two — timber and manufacturing — saw any sort of inclusion in the governor’s spending program. The governor’s proposal would send $20 million to rural areas reliant on the timber industry through a forestry and rural community economic investment program, and another $20 million would go to tax credits to help manufacturers remain competitive.

That’s not much considering the $1 billion they’ll have to put in, and Inslee’s spending plans runs counter to OFM economic modeling that suggested returning 65 percent of the revenue to affected industries and utilities, and only 5 percent for operating revenue. His task force on carbon policy recommended sending money back to affected industries to avoid a competitive disadvantage in the U.S. and international marketplace.

It would also require getting Democratic lawmakers representing rural areas — such as those timber communities on the Olympic Peninsula — on board with the notion of adding costs to businesses that would in turn fund transportation projects in urban areas, and become dollars that could get snapped up by larger school districts.

Inslee has also included funding for something business and the ports badly desire — money for highway projects, such as the expansion of Highway 167 that would allow the Port of Tacoma to increase its operations.

With the House taking first crack at the budget in the upcoming session, and the climate policy so deeply intertwined with it, Appropriations Chair Ross Hunter, D-Medina, said he liked the idea of charging carbon emissions but would need the full details of the governor’s plans before signing on. 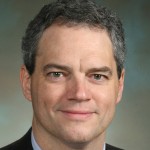 “I think this is an interesting opportunity,” said Hunter, who was among several Democratic lawmakers who stood astride the governor during his address. “It seems like an opportunity we should not just put aside. I’d rather tax polluters than raise taxes on the public. I like the direction he’s going in.”

But Sen. Doug Ericksen, R-Ferndale and chair of the Senate Energy Committee, called the prospect of a cap-and-trade program a “tax on freedom” to the Seattle Times.

Ericksen represents a district covering the mostly rural Whatcom County that includes two of the state’s five oil refineries, and told the Times he views it as a means of increasing fuel and energy costs. He said it’s “an energy tax, which is really a tax on mobility.” 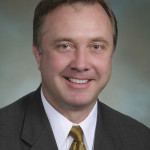 BUSINESS BEGINS ROLLING OUT ITS RESPONSE

The group has put out an alternative plan, calling for using enhanced hydropower, smaller-scale nuclear production, biomass and natural gas as a means of providing reliable, cost-effective baseload power for industrial production and manufacturing within Washington state, without the costs associated with a cap-and-trade program.

It also pushes for Washington to become more energy efficient, advocating that it’s cheaper for the state to save a megawatt of electricity — and the associated greenhouse gas emissions — than produce a new one. It also calls for the transportation investments that would ease traffic congestion, and adding incentives for alternative fuel production, electric vehicle charging stations and natural gas fueling.

“Governor Inslee’s plan is to make Washington families pay more to keep the lights on at home, buy gas for their car, or put food on the table,” said Daren Konopaski of the International Union of Operating Engineers, Local 302, in a statement. “It’ll also make it more expensive for contractors to purchase equipment, and there is little guarantee of environmental benefit.”

Inslee, in his address, said some costs may be passed on to consumers, while others will be absorbed by the companies. He flatly rejected the notion that his program would cost the state more jobs than it ultimately produces.

“Some of it can be passed on to consumers,” Inslee said. “I am not going to embrace some plan that reduces carbon emissions but also reduces jobs.”

Jeff Johnson of the Washington State Labor Council, AFL-CIO, introduced Inslee at the news conference, and said the cap-and-trade proposal was an innovative solution to a generational challenge Washington faces — climate change. He quipped that all problems started out as solutions, referring to the use of fossil fuels for energy production, which drew a laugh from the governor.

“Governor Inslee’s proposal deals with a problem that was for 150 years viewed as a solution,” Johnson said. “His proposal challenges the status quo.”

Cliff Traisman, a lobbyist in Olympia representing the Washington Conservation Voters and the Washington Environmental Council, said he recognizes the tough path a cap-and-trade program faces before it ever gets 50 votes in the House and 25 votes in the Senate.

“It’s certainly not going to be easy, but we are going to tackle this with all the seriousness that it deserves,” Traisman said. “And we are asking the Legislature to do the same. We go in with open eyes, and I assume the governor will as well. We believe charging for carbon pollution can solve multiple problems. The policy and the revenue go hand-in-hand.”

12/22: This story was updated from its original version to clarify that Gov. Inslee has not yet started the formal rule-making process on a clean-fuels standard.