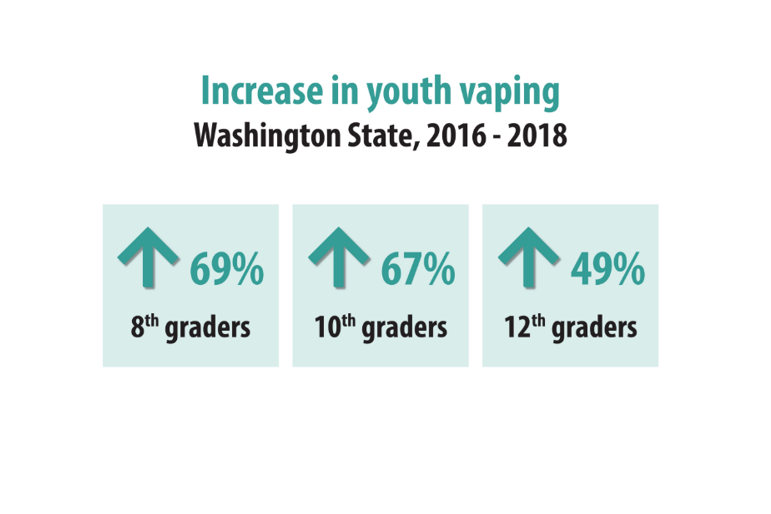 On Friday, Governor Inslee announced an executive order implementing a broad range of regulations on e-cigarette and vaping products.

The executive order comes on the heels of an outbreak of vaping-related lung injuries across the country. As of Thursday, there have been over 800 cases reported nationwide – 7 reported in Washington State – and 12 deaths. The exact cause of the lung injuries remains unknown.

“In the absence of one or more known, specific harmful substances in this vapor-product health emergency, and in the absence of the ability to fully isolate and remove those harmful substances once they are identified, it is imperative that the state respond in a comprehensive and evidence-based manner to address this public health crisis,” reads the executive order.

The order directs the Washington State Department of Health (DOH) to request that the State Board of Health adopt emergency rules to impose a ban on all flavored vapor products at their next meeting in October. The order directs the DOH and the Washington State Liquor and Cannabis Board to develop warning signs related to vaping health risks, require manufacturers to disclose all ingredients in their products, create a vaping awareness education program, and remove all dangerous products from stores once the cause of the lung injuries is identified.

“We need to act for the public health of our people. We’ve got to do better to regulate, to monitor, and to communicate to the public the dangers of these products,” said Inslee.

During Friday’s press conference, Inslee placed on emphasis on the significant rise in vaping rates among teens and young adults. According to the executive order, 67% of the reported lung injuries occurred in those age 18 to 34 year old, and 16% occurred in those under 18.

“We’ve made amazing progress toward reducing traditional tobacco use here in King County,” remarked King County Executive Dow Constantine at the start of the press conference. “Keeping kids from initiating cigarette use is an incredibly important step to assuring a healthy future. But vaping is putting this progress at risk. This powerful nicotine punch is putting a new generation of youth at risk for nicotine addiction.”

“We know that there is an action causing this problem. And that is the predatory marketing by this industry to our children — intentionally trying to addict them to various products, and using flavoring to do so,” said Inslee.

Inslee said he wants to do more and go further, and that this executive order is simply the start to the regulation of these products in Washington State.

“This executive order is a floor, not a ceiling. It sets up a further dialogue so we can continue to look at the science on this issue as science continues to come in. So, this is part of an ongoing process regarding protection of citizens from vaping and smoking.”