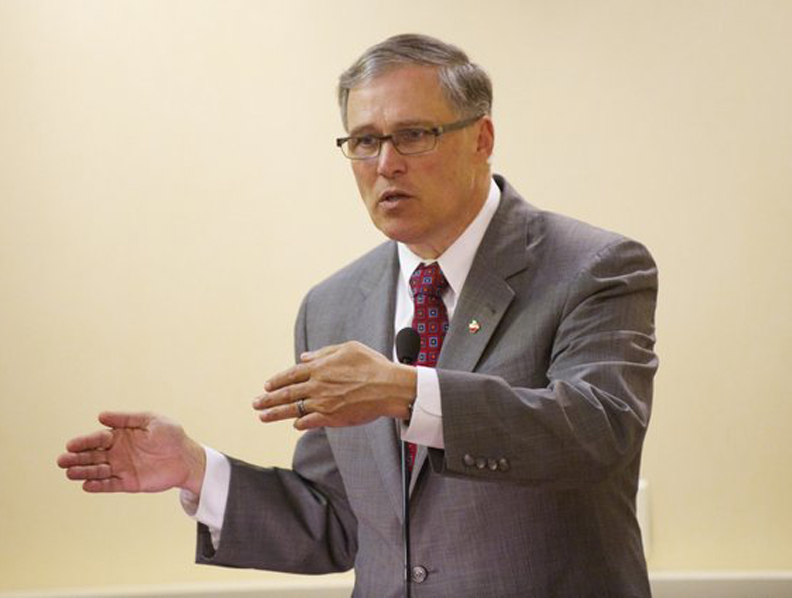 Inslee Greets Transportation Olive Branch From the Senate With a Hatchet 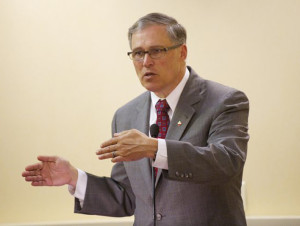 OLYMPIA, Sept. 3. — When Gov. Jay Inslee held a news conference Tuesday to praise the Senate Majority Coalition Caucus for launching an effort to strike a deal on transportation, it was probably a good thing he mentioned that was what he was doing. Otherwise you might have gotten the impression he had come to bury it.

The largely Republican coalition is convening a series of hearings statewide on transportation reforms and proposals for transportation taxes and spending — and in the two weeks since the hearings were  announced, the effort has gathered a bit of steam. Joining Republican transportation co-chair Curtis King will be his Democratic counterpart Tracey Eide, and with them will be transportation secretary Lynn Peterson. But it just wouldn’t be a sunny day at the Capitol if someone didn’t take an opportunity for bipartisanship and use it to bop the other team over the head, and Washington’s top elected official made the most it.

Inslee told reporters that if the Senate leaders decide to do something on transportation, “all sins will be forgiven.” That was one of the nicer things he had to say.

In terms of news value, the news conference was a bit on the thin side. The governor, appearing with King County Executive Dow Constantine in Seattle, expressed essentially the same position outlined by his office in a story published by Washington State Wire Aug. 16. Inslee said he would be willing to call a special session in November if lawmakers are able to reach agreement in advance on transportation taxes and on a package of reforms. Lawmakers already know it; he offered the same message he provided to Senate leaders in a private conference call earlier in August. In response to a reporter’s question, Inslee said he won’t attempt to pressure lawmakers by calling a special session come rain or come shine. “The votes have to be there,” he said.

More noteworthy were the punches the governor took during the course of his praise for the Senate effort. He said, “I am more interested in the future than in the past” and he called the Senate initiative “a golden opportunity for bipartisanship.” He went on to explain that the failure to pass a $10 billion transportation proposal last session was entirely the fault of gutless Republican senators who failed to stand up to their leaders. “What happened was that in the majority caucus, folks who recognize the need for transportation and infrastructure were not willing to stand up and say we have got to have a vote, and they listened to those in that coalition that were against any funding for any bridge, anytime, on any river,” the governor explained. “You can go ask them why they did that.”

Then Inslee mentioned he was more interested in the future again. Shortly after, he said he believes Republican senators went home after the session ended and were confronted by outraged local business interests. He said they are cooperating at gunpoint. “They have caught both barrels from the business community asking why haven’t you acted? And as a result we are seeing an increased appetite for action.”

For some reason, Inslee’s effusive praise for the Senate effort failed to generate much warmth from the upper chamber. It might be pointed out that Senate Majority Leader Rodney Tom, D-Medina, told reporters about the hearing plan on the final day of the session, and this was before members had a chance to go home and speak with a soul. The Democratic House, demonstrating only tepid support for a tax increase, had passed their transportation package two days before, despite the fact that lawmakers had been holding a special session for six weeks at that point and had found little to do during that time. The day Tom told reporters about the plan was June 29, the day after the final budget vote. Few lawmakers were eager to remain in town a moment longer than they had to, and it was generally conceded that at least two weeks of negotiation would have been required in order to reach a deal. That would have kept the Legislature in session through mid-summer. The Senate settled the question by deciding to adjourn.

Tom responded to the governor’s comments in a news release Tuesday. “It’s unproductive for the governor to be pointing fingers,” he said. “We’re focused on the future and listening to the citizens of Washington State. The House may have sent a transportation wish list over to the Senate, but no bond bill ever followed. Without legislation to sell the bonds that generate the money to pay for projects, no ‘transportation package’ could have been passed. We’re now looking forward to crafting a package that has tangible support from lawmakers, businesses and citizens.

“As the governor knows, that’s why the MCC is going around the state to hear directly from the people to see what level of additional transportation spending they will support. We are listening to the people…not just to lobbyists and special-interest groups, but the taxpayers themselves…to hear what they are willing to support, and find out how they feel about our reform ideas that could free up more money for transportation projects down the road.”

Tones Things Down, Just a Tad

As he continued his praise for the Senate effort, the governor said the chamber’s “abject failure” last session really wasn’t about the controversial Columbia River Crossing, one of the items on the $10 billion project list. That was the reason most commonly cited at the time. Two of the coalition’s 25 members, Ann Rivers, R-La Center, and Don Benton, R-Vancouver, were vehemently opposed because the plan would have obligated Vancouver voters to pick up part of the tab for a Portland-area light-rail spur. If the bridge was included they said the tax package was a non-starter. Inslee has maintained all along that the now-dormant bridge project was only a small part of the problem. Immediately after the session wrapped, Inslee said the failure of the package really was a matter of “right-wing ideology.” Now that he is working with the Senate in a spirit of cooperation, the governor avoids such terms. But he told reporters, “We need to have some in the majority coalition show their willingness to act for the state of Washington,” he said.

Rather than, for instance, acting against it.

Though Inslee’s own Democrats in the House didn’t demonstrate much enthusiasm for the gas-tax increase, either, Inslee said the fact that the House did finally take a vote demonstrated how eager his team really was. “Not only did we map it out, we passed it in the House, we put the votes on the board, we showed the jot and tittle of the exact language and the exact dollars and the exact bridges and the exact roads. We were ready to go. All we needed the Senate to do was to press the green button.”

Inslee addressed the Senate’s contention that Washington road projects cost substantially more than in other states, that policy problems need to be resolved, and that big goofs like the $80 million pontoon problem on the new 520 bridge need to be addressed in a systemic way. He did it by pointing out the Department of Transportation is improving on the good job it does at present, and he observed that DOT managed to quickly erect a temporary bridge over the Skagit River when it collapsed in a catastrophic accident this spring. “We do need to improve the performance of our state and our transportation system,” he said. “We are doing that. The team that built a bridge over the Skagit in 27 days is now actively pursuing ways that we can reduce the time for permitting, ways that we can we bring right-sizing of planning and least-cost planning systems, ways to use lean management in our management systems across the Department of Transportation. They’re not waiting for the Legislature to do that. We’re doing this already.”

The final schedule for the Senate hearings is as follows: