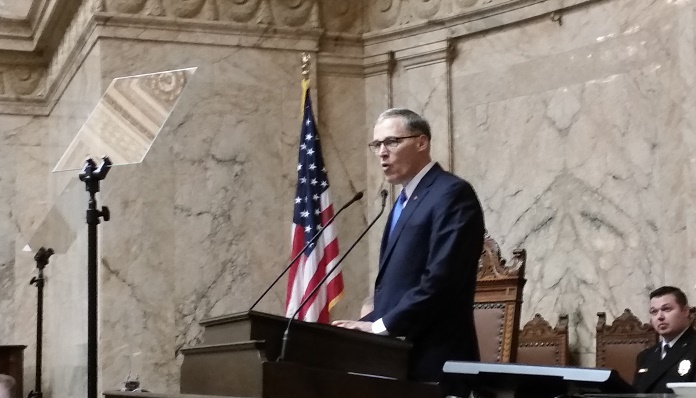 If the house of origin deadline, which eclipsed Wednesday at 5 p.m., is the unofficial starting point for the legislative session’s second act, there’s no better curtain raiser than a hearing in House Appropriations on Thursday afternoon for Gov. Jay Inslee’s cap-and-trade proposal.

It’s a surefire bet for political drama if it moves forward. The centerpiece of Inslee’s first term environmental agenda, cap-and-trade levies a $1.3 billion annual tax on carbon emissions for about 80 to 90 firms statewide. It’s the darling of the environmental groups wanting the state to act on climate change, and maligned by businesses eyeing the hefty hit to their bottom line.

It’s also been in legislative limbo for the last month, since passing the House Environment Committee Feb. 10. The hearing in the Appropriations Committee is the first public action on the bill since then, and the Office of Financial Management released a new analysis on the potential economic impacts of cap-and-trade on Wednesday.

The key finding: cap-and-trade costs would have at best marginal benefit and at worst no net impact on the state economy over the next 20 years, and creates revenue to fund the working families tax credit that would leave extra money in the pockets of the poorest in Washington state who have to pay higher energy costs as a result of the tax. It seeks to give the governor the middle ground in the debate over cap-and-trade – not being too rosy over what could happen economically, nor veering into the dire predictions of tens of thousands of jobs lost annually once the program takes effect. The $1.3 billion tax is only .25 percent of gross state product, according to OFM.

“It will disappoint folks who are too dire or optimistic,” said Marc Baldwin, an assistant director for OFM. “We found it has a modest impact on prices and personal income.”

But there’s ample opportunities to put up counter-arguments to the analysis, as the projections have shifted with every new analysis that’s been put forth for cap-and-trade, said Brandon Houskeeper, a lobbyist for the Association of Washington Business. Inslee rolled the proposal out in December saying it would affect 130 of the state’s largest polluters – the so-called “dirty 130” – but that figure has dropped down to 80 or 90, said Chris Davis, a policy adviser on carbon markets to Inslee, at a meeting with reporters on Wednesday.

That’s because the bill was amended in the Environment Committee to take out fuel distributors – the companies that move crude oil products from the five oil refineries in Washington state to markets – because they could be charged twice if the fuel ends up in California or British Columbia, which slap their own carbon charges on the tailpipe emissions the consumption of that fuel creates.

This is a crucial dispute over cap-and-trade: whether it represents a tax on the oil companies that they’ll absorb without passing on the costs to consumers, or whether it will mean sharp pain at the pump for every driver who has to buy a gallon of gas.

The OFM analysis released Wednesday projected an added 41 cents to the price of gasoline by 2035, as well as increases in the price of natural gas and electricity. But it said this would be absorbed without too much trouble based on modeling of consumer behavior and energy consumption, using U.S. Bureau of Labor Statistics survey data as the foundation for the calculation.

Under those scenarios, cap-and-trade would mean an additional $144 per year in costs to the 20 percent of lowest-income residents in Washington state, $199 per year for the next 20 percent of the income bracket, and up to $362 annually for the top 20 percent.

With the Working Families Tax Credit funded, up to 500,000 families would be eligible to receive an average of $223 each year as a rebate. That would leave the poorest Washington residents with a net gain in income, the study argues, contingent on their eligibility for the tax break.

“There’s a belief that this is a regressive policy,” Baldwin said. “We find a modestly regressive tax impact.”

But the federal data doesn’t break down to specific Washington state conditions, for example if a farm worker in Central Washington has to drive 80 miles every day to get to job sites, or someone living in Everett has to drive 60 miles back and forth from Seattle every day. Lower income workers often own less fuel efficient vehicles, some getting a bare 15 miles to the gallon. The increase in gas prices would mean a $500 extra annual bill for someone commuting 80 miles daily, and that’s with gasoline alone. The figure doubles with another adult in the family commuting. The tax rebate would only cover a small chunk of that.

“The people of the state of Washington are now facing a $1.3 billion tax on energy,” said Houskeeper. “That’s a tax on employers in this state.”

And, the overall amount of revenue generated from the program has jumped – from $1 billion in December to $1.3 billion in March – according to new projections from the Department of Ecology. The firms dropped, but Houskeeper questioned how the revenue projection grew. The cap-and-trade program’s revenue will ultimately be based on base line levels of carbon emissions for Washington state, and how you attribute those to particular sectors or companies. It covers all fuel suppliers, importers of electricity that creates carbon, and firms that generate more than 25,000 metric tons of carbon annually.

The most recent overall figure, with the state in the grips of an economic recession, was 91.7 million metric tons of carbon in 2011.

Davis said the state will use a projection for setting the baseline amount of carbon emissions that will be taxed under cap-and-trade if the auction kicks off in 2016, which would require the bill to be passed this legislative session. That would factor in fluctuations in hydropower generation, which is Washington’s principal energy source but varies year to year based on snowpack. A poor water year, as 2015 is shaping up to be, will lead to more emissions being created as utilities switch to more carbon-intensive power sources to cover the slack.

It also takes into account economic variables, as carbon emissions are unquestionably a byproduct of economic activity. A manufacturing firm expands and has to consume more power, potentially creating carbon in generation if it’s not carbon-free nuclear or hydropower, and sends out carbon in the manufacturing process. A similar thing will happen with more hiring – more people driving to and from their job, for example.

It’s a basic question of how you calculate a firm’s carbon profile. The U.S. Environmental Protection Agency does an annual survey of carbon emissions by state, and Washington’s most recent showed about 100 firms reporting more than 25,000 metric tons of carbon dioxide annually, thus subjecting them to cap-and-trade. They reported 25.7 million metric tons of carbon.

“Ecology’s current program has kept costs low for reporters by reusing EPA’s online reporting tool,” the fiscal note reads. “That tool is insufficient with a market program, so Ecology has worked to find an existing alternate that would meet the needs of the proposed program.”

This hits on a key part of cap-and-trade’s economic impact. The $12 price is what California and Quebec established in its most recent auction this week. Quebec just linked with California’s existing cap-and-trade program this year, and the $12 price per ton is in line with past auctions California has conducted on its own.

But California has also been handing out 90 percent of the allowances for free, as part of a phase-in to assist industries into compliance with cap-and-trade by in essence delaying the costs to future years. HB 1314 wouldn’t do that – every covered entity would be hit with the full brunt of the cost in the first year of auctioning in 2016. California plans to slowly wind down the number of allowances offered freely, but it still projects to generate about $1 billion in revenue this year. That’s a state of 37 million people, compared to Washington’s roughly 6 million. Any company that can’t get under the cap, pay for offsets, or pay the tax, would be subject to up to $10,000 daily in fines, which would quickly drive some out of business.