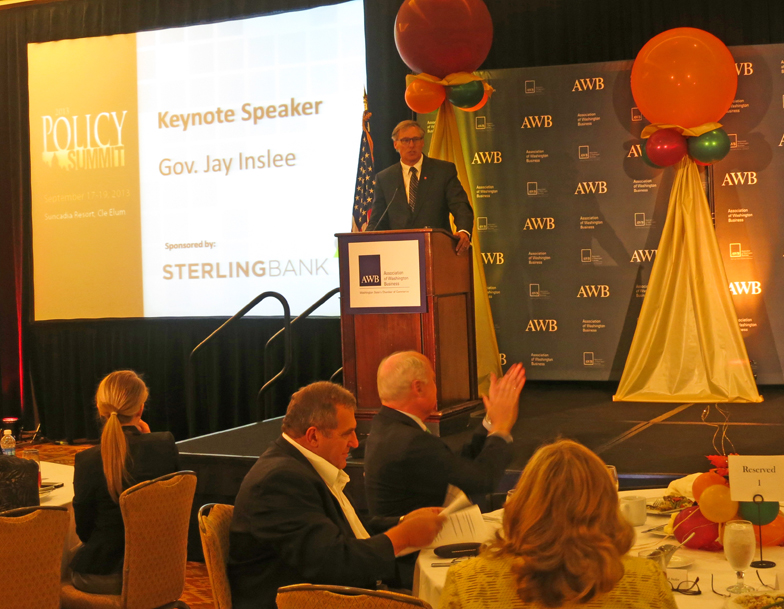 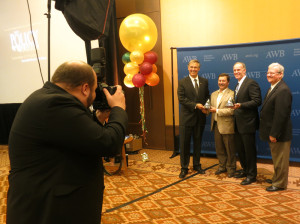 All smiles, despite the message from the podium: Gov. Inslee presents AWB’s legislator-of-the-year awards to Senate Republican Leader Mark Schoesler, R-Ritzville, and Rodney Tom, D-Medina. With them on the right is AWB chairman Doug Bayne.

SUNCADIA, Sept. 18.—Gov. Jay Inslee threw down the gauntlet Wednesday to the state Senate, saying he wants a transportation package by the Apple Cup – and which might embrace the controversial Columbia River Crossing project to boot.

Appearing at the annual meeting of the Association of Washington Business at the Suncadia resort near Cle Elum, Inslee said he wants lawmakers to pass a transportation tax package and road-construction financing plan sometime before the Nov. 29 football game between the University of Washington and Washington State University. You might call the two-month deadline a direct challenge to the state Senate – and in particular to Senate Majority Leader Rodney Tom, D-Medina, and Republican Leader Mark Schoesler, R-Ritzville, who happened to be sitting in the room.

“I think there is an increasing ability to find a bipartisan solution, and we’re going to be talking to a lot of people in the next several weeks about that,” the governor said. “Our goal is this – to get a transportation package before the Apple Cup.”

Without saying it directly, Inslee was calling for a special session to be held Nov. 21 and 22, when the entire Legislature is going to be in Olympia anyway for a series of committee meetings. Offering his challenge in a room filled with the state’s business leaders was a move fraught with symbolism, as a transportation package is favored by a broad swath of the state’s business community, and the stand might help the Democratic governor drive a wedge between business and its natural allies in the Senate. His target was obvious if unmentioned by name – the largely Republican Majority Coalition Caucus in the Senate that refused to take a vote on a transportation plan on the final day of the session, and was unwilling to extend the Legislature’s already-interminable special session over the summer months to hash out a deal.

Senate leaders Tom and Schoesler said afterward they were unimpressed. The governor presents a challenge that may be impossible to meet. The Senate this week launched a “listening tour” of meetings statewide seeking public input on a transportation plan, but the coalition is laying out an ambitious set of goals that include greater efficiency and accountability in transportation projects. It is the sort of agenda that would prove difficult to pass even when lawmakers are at the Capitol to negotiate, and it also depends on the outcome of a state-sponsored study of transportation costs that will not be completed until the end of December. But Tom and Schoesler said the governor’s call for a renewed effort to build a Columbia River bridge at Vancouver is the corker. It could end any prospect of a quick deal, particularly if it includes light rail. “Light rail across the Columbia River was one of the things that derailed the package last spring, so it has to be off the table or there is no deal,” Schoesler said.

Tom and Schoesler scored a symbolic victory of their own. As a matter of custom, the governor presented AWB’s annual awards to influential lawmakers and lobbyists. And so Inslee found himself handing trophies to his two top political rivals, as AWB named them “legislators of the year.” All three smiled sweetly for the cameras. 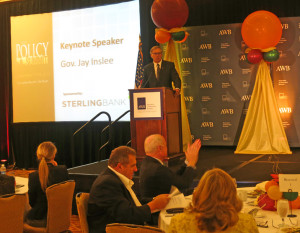 Inslee throws out his challenge before a most-interested crowd: Transportation package by Apple Cup.

Speaking at the luncheon meeting of the business organization’s annual Fall Policy Summit, Inslee delivered a wide-ranging 35-minute speech that dealt with specific concerns to the state’s business community — a sharp contrast with his appearance before the same group in January, when he delivered a warmed-over version of his campaign stump speech. Among other things, Inslee said he hopes to make a convincing case to Boeing to build the next-generation 777 airliner in Washington state, and that he hopes to find a way to impose new, stringent water-quality standards in a way that satisfies Boeing and industry as well as Indian tribes. But the main thrust of the governor’s speech was transportation – and it seems he is making the Columbia River Crossing a sticking point once again as he did last session.

Inclusion of the bridge in this year’s proposal for a 10.5-cent gas-tax increase was the dealbreaker, as Republican lawmakers in the Vancouver area balked at the tax burden that would be imposed on Clark County by Oregon’s insistence that the bridge carry tracks for the greater Portland area’s Tri-Met light rail system.

Though Inslee said two weeks ago at a Seattle news conference that he would be willing to sign a transportation bill that does not contain money for the Columbia River Crossing, he said Wednesday that he views completion of the new bridge as a vital economic development measure for southwest Washington. He stopped short of saying that the bridge must be included in the transportation package he expects lawmakers to pass in two months’ time, but the effect is the same. Key members of the Senate Majority Coalition say that if the bridge is back on the table, any transportation package has to lay the light rail issue to rest once and for all.

In his remarks, Inslee appeared to endorse a proposal from Oregon Gov. John Kitzhaber for a go-it-alone Oregon-only plan to build the bridge.

“We have a 100-year-old bridge,” he said. “Its pilings were put in the river when Woodrow Wilson was president. We have got to replace that bridge, everybody knows that. We did not succeed in having a legislative solution to this, but I want to report that I think we have found a creative way to move forward and get that bridge done, by delaying some of the work that would have otherwise have been in the original project.

“Moving forward, the local community is really coming together. The business community is very excited about our ability to move forward and find a way to finance this. I think we may have found a way to do this without any showstoppers. So we are continuing to work across the river to find that solution and get that bridge built even though we don’t have a particular funding source in the transportation funding from the state of Washington.”

Inslee said passage of a transportation package ought to be a top priority for business. It’s not just that a road-construction effort would be a shot in the arm for contractors and workers alike. “It is just as important to move quickly and efficiently as it is important to move apples and airplane parts,” the governor said. “This is also about businesses that need their employees to come to work on time and not get stuck in traffic.”

Inslee said he also believes the state Department of Transportation should be accountable – though he left unmentioned the multi-million-dollar DOT errors that have prompted the concerns from Republican lawmakers, and instead said the agency has been doing outstanding work of late. He cited the completion of a temporary replacement span for the Skagit River Bridge on Interstate 5, which splintered like matchsticks last May when it was struck by a semi. “Nobody thought [Secretary of Transportation Lynn Peterson] was going to be able to put up a bridge in 27 days across the Skagit River. She won a lot of bets with a lot of people across the country about how long it was going to take.”

And Inslee found a way to link that catastrophic accident – which arguably had nothing to do with road maintenance – with the need for a transportation package. “Here are a couple of factoids that I hope you will share with your colleagues in the next several weeks. Without a transportation package this year, the state will experience a 52 percent decrease in the maintenance budget for our bridges and roads in the next two years. Seventy-one additional bridges will become structurally deficient; some bridges may even have to be closed for safety reasons. Already the American Society of Civil Engineers has determined that 366 of our bridges are structurally deficient and 1,693 are functionally obsolete.

“I’ve seen what a bridge looks like in the bottom of the river in the Skagit River. I do not want to see that scene again. We have got to have action this year to prevent this from occurring.”

Though Inslee did not lash out directly at the Senate Majority Coalition Caucus as he did in his press conference two weeks ago, when he blamed the Senate for its “sins,” Tom and Schoesler were quick to recognize the implied political criticism in the governor’s remarks. Schoesler noted that the Senate caucus wasn’t the only body that had problems with this year’s proposal. The majority Democrats in the House demonstrated no great enthusiasm for the tax package themselves, as they did not pass the tax proposal until the 151st day of the 153-day session, even though there was plenty of time for them to have done so in this year’s largely-idle 48-day special session. That left the Senate little time. Schoesler said, “It depends on how willing all the parties are to put their differences aside. Not just one but many different factions have to come together.”

Tom said the Senate is determined to assemble a proposal that gives the state the biggest bang for the buck – not just revamping the management of the state’s transportation projects but also placing more emphasis on congestion relief, by repairing and expanding the state’s existing highway system. A renewed emphasis on the Columbia River Crossing is a good way to bog everything down, he said. “If we are going to get back into that muck, you’re going to be where we are at, and my understanding was that the CRC was off the table. Let’s focus on those things we can agree on, and let’s take those things that are nonstarters off the table.”