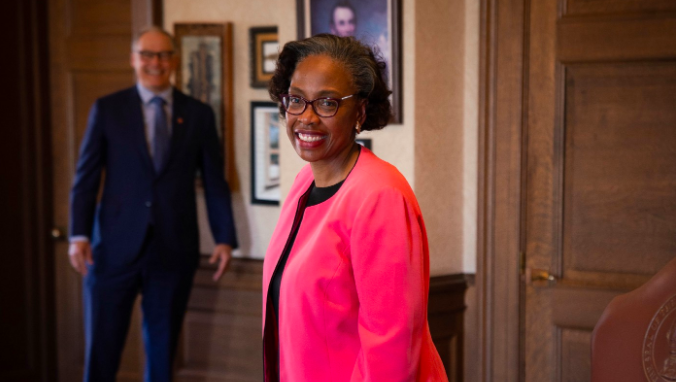 Judge Whitener will replace Justice Charles Wiggins, who retired from the bench in March.

Judge Whitener inspires lawyers and non-lawyers alike with her relentless work to raise awareness for matters of race, justice and equity,” Inslee said. “She is tireless in her commitment to building a justice system that works for all, and as a Supreme Court justice, she will have an even greater platform to promote justice for everyone in Washington state. I am very pleased to appoint her to this bench and I look forward to her many contributions to our state for years to come.”

From 2013 to 2015, Whitener served as a judge on the Board of Industrial Insurance Appeals. She was then appointed by Inslee to the Pierce County Superior Court in 2015, where she would later win re-election to a full term in 2016.

Before becoming a judge, Whitener litigated criminal cases for 14 years as both a prosecutor and defense attorney.

Additionally, Whitener serves as co-chair of the Washington State Minority and Justice Commission and as a member of the Civil Legal Aid Oversight Committee.

Originally from Trinidad, Whitener moved to the United States as a teenager to attend college. She earned her bachelor’s degree from Baruch College in New York and her Juris Doctor from Seattle University School of Law.

“On behalf of the state bar and as a practicing lawyer, I am thrilled Judge Whitener will be serving the people of Washington on the Supreme Court,” said Washington State Bar President Rajeev Majumdar.

Last fall, she received the bar’s Excellence in Diversity APEX Award, our highest honor for someone in the legal community dedicated to championing diversity and justice. That’s because Judge Whitener is a tenacious, fearless, and compassionate advocate of human rights for all, and she has opened pathways and opportunities for many communities,” Majumdar continued.