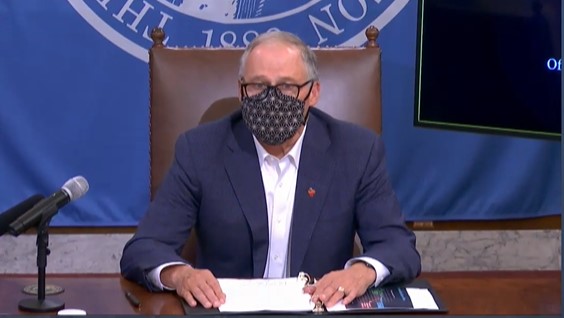 Governor Jay Inslee unveiled a climate policy package for the 2021-2023 budget in a press conference on Tuesday. The package invests $428 million in clean transportation, clean buildings, and clean energy projects with the goal of the investments and policy proposals to create a comprehensive climate program to ensure that the state meets its climate goals.

Climate change is a health issue, an economic issue and an equity issue. We must address these very real threats to our state, and we cannot wait,” Inslee said. “The time to act is now. These proposals would reduce nearly 30 million metric tons of emissions by 2030, a 35% reduction from current projections. And these standards and investments, with justice at their core, will grow clean energy jobs in Washington.”

Among the proposals, Inslee introduced the Climate Commitment Act. This act, sponsored by Senator Reuven Carlyle, will work to meet the statewide greenhouse gas limits passed in the 2019-20 legislative session by capping emissions for the largest emitting industries. The act will also direct the proceeds from the sale of emission allowances to a new climate investment account that will reinvest this money into clean energy programs. The Governor’s budget allows $12.6 million to begin the implementation of this act.

As our state begins to break out of the grip of the pandemic, I believe courageous climate action that invests in clean energy jobs, embeds equity at every level and reduces emissions to Paris Accord levels is central to rebuilding our quality of life,” Carlyle said.

The transportation sector is responsible for nearly 45% of Washington emissions. So by reducing carbon in the state’s fuels, Inslee hopes that emissions will be reduced by 4 million metric tons a year when the program is fully implemented in 2035. The governor’s budget includes $2.85 million for the Department of Ecology’s implementation of the clean fuel standard.

We must address the biggest emitter of greenhouse gas emissions in our state, the transportation sector, in order to meaningfully address the climate crisis,” Representative Joe Fitzgibbon said.

The governor also allocated $230 million to invest in electrifying buses, ferries, and charging infrastructure for electric vehicles. With Washington State Ferries being the largest consumer of diesel fuel in the state, Inslee hopes that this electrification will save Washingtonians up to $14 million a year in operating costs.

The budget also allocated $1.5 million in funding in education and promotion of electric vehicles, with a focus on access for low income communities.

Inslee believes that this legislation will increase the number of clean energy jobs in Washington. Nearly 90,000 people worked in clean energy jobs during 2019, with the fastest growing industry being construction.

Climate change also poses a pandemic-like attack on the state’s health, said Inslee. But these health effects are not felt equally across communities, and often impact the most marginalized communities disproportionately.

Inslee proposed the creation of a permanent Environmental Justice and Equity Advisory Panel. This panel would recommend plans and proposals for the funds in the climate investment account, while ensuring that these recommendations also undergo an environmental justice analysis.

The proposal also would implement the Environmental Justice Task Force recommendations, which would work to incorporate environmental justice into government structures, systems, and policies.

The proposal would put into law much needed provisions for racial and environmental justice, Senator Rebecca Saldaña said during the press conference.

“It is the way that we achieve our climate goals and make them last and make them persistent,” Saldaña said. “And allow our youth and our next generation to be able to benefit and take ownership and stewardship of this new way and this new economy.”

When Inslee was asked about why he believes this climate package would be better received than former climate policy proposals, especially as the Legislature prepares to tackle an anticipated budget shortfall due to the pandemic. Inslee pointed to  the 2020 wildfires, and the damage that those events had on Washingtonians.

This is a real thing, and people are desperate and demanding action from their legislators,” said Inslee.