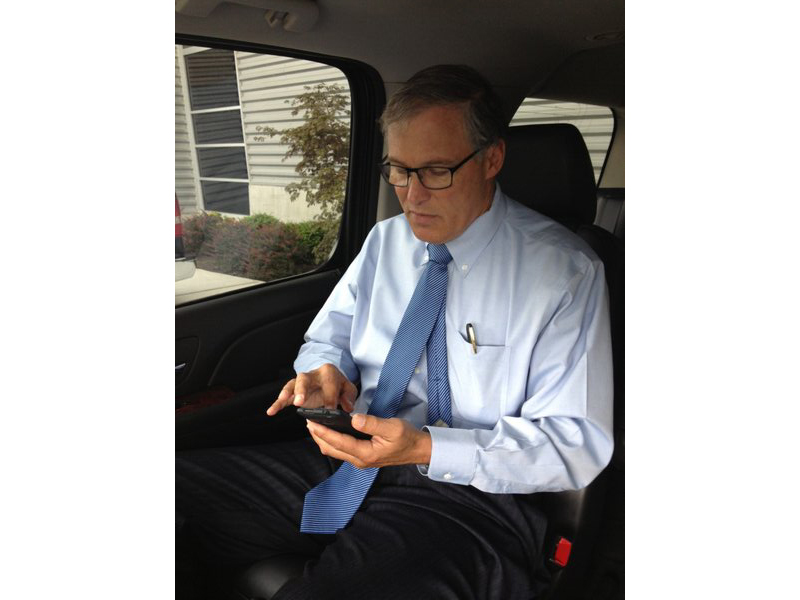 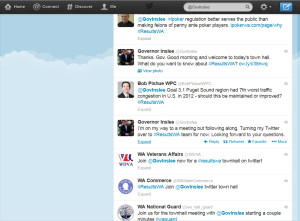 Inslee’s staff embraces the brave new world of Twitter, where no idea is too big or too important to be compressed into 140 characters.

OLYMPIA, Sept. 12.—The Inslee Administration’s experiment in 140-character communication Thursday morning offered every bit of enlightenment you might expect. It held a ‘Twitter town hall’ on what is probably the most abstract and complicated government initiative in ages, a sweeping strategic planning effort for the whole of state government. It drew kudos and carping, and questions and answers that frequently seemed to have something to do with one another. Also, more than a few partisan one-liners. But if you were expecting deep thoughts — well, this is Twitter, right?

The Inslee Administration used the rather unusual and abbreviated linguistic form as one means to gather public comment on its new Results Washington initiative. It is a sweeping and rather complex business plan for state government, which aims to establish benchmarks for performance and measure progress on an annual basis. Formally unveiled by Gov. Jay Inslee Tuesday, it sets broad goals for the entirety of state government – things like a prosperous economy and a clean environment and a world-class education system. For every goal there are subgoals, like boosting the number of jobs statewide by 150,000 in 2015. And then there are sub-subgoals, and then sub-sub-sub goals — 205 of them in all, so far. Many of them get down to the nitty-gritty level, with detail work still be done — wonk-level stuff like “maintain percentage of transit fleet that exceeds federal transit administration minimum useful life scheduled at 2012 baseline at X%.”

But the biggest innovation of all may be that an astoundingly complicated idea can be communicated one sentence at a time. Government, after all, is the sort of field where no one uses one word if four will suffice. 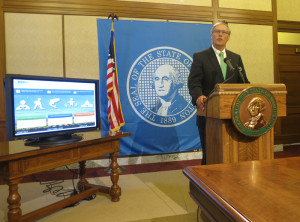 The whole thing started with a bit of tittering over twittering, regarding the comment from the governor that started the show. Said Inslee, “I’m on my way to a meeting but following along. Turning my Twitter over to #ResultsWA team for now. Looking forward to your questions.”

One wag remarked in an email aside: “It’s LEAN management – public town halls must run better without the principal that called them.” He added, with a nod to the much-lampooned Xs that mark the undefined spots in the Inslee plan, that the governor might add a new one to the list. “Increasing public participation in govt accountability from X to X unless conflicts with meeting.”

There were 113 Tweets in all during the one-hour period, from Inslee’s staff and from those who signed in. But perhaps a third of the comments might be characterized as notifications from state agencies and stakeholder groups that the forum had opened, or requests from twitterers that Inslee’s staff use proper hashtags.  Or congratulations that the Inslee Administration had launched the planning effort, or thank-yous for answering questions. There also seemed to be quite a few platitudes with no direct connection to the conversation, such as the observation from the Children’s Alliance: “@GovInslee good ideas deserve sound investments.”

One might have detected a bit of cheerleading from the Office of Superintendent of Public Instruction. “A Working Washington built on EDUCATION and innovation!” proclaimed one message, “@GovInslee is making world-class education a top priority” said another.

Odds are he wasn’t offering hugs.

A Bit of Seriousness 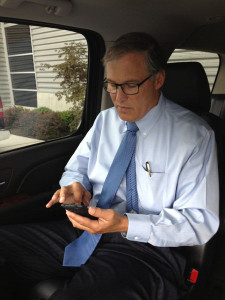 Twittering governor checks in from the road.

In and amid the twittering there were a few serious questions and a few serious answers, though it wasn’t always clear who was responding to whom, and more often it seemed more a chaotic matter of everyone chiming in with their two cents. At one point Inslee’s staff explained the basic idea behind the plan: “Why does #ResultsWA matter? Because we can only improve what we can measure.”

The staff counted 31 questions in all. The state Health Care Authority posed a rather serious one, twice, “How exactly will you measure improvements in the goal areas?” But it didn’t appear the question was answered. Inslee’s office says that questions deserving a longer response will be answered on the Results Washington website.

Yet a few were answered on the spot. Scott Seaman of the Association of Washington School Principals asked, “How do you plan to support school principals as they strive to support teachers working towards distinguished ratings?” The response: “We need to make sure principals get adequate training on the multiple evaluation frameworks.”

There were a number of other exchanges like it, for better or worse, also reflecting the artistic limitations of the 140-character form.

When it was over, Inslee spokeswoman Jaime Smith called it an experiment worth trying again. “140 characters isn’t always the easiest way to communicate, but when we look back on things we think it pretty well,” she said. Analytics showed it to be one of the top ten topics Seattle residents were twittering about – one good sign. And there did seem to be a few regular taxpaying civilians among the avalanche of comments from agency and stakeholder groups. She said the governor’s office will try a few more Twitter forums as it locks down the planning process over the next six weeks. For those who feel more comfortable writing paragraphs, written comments are being welcomed at www.results.wa.gov.

And what about the meeting that took Inslee away from his computer? Inslee was en route to a meeting with Snohomish County business leaders on transportation issues. But Smith said, “the governor was checking in by phone and he was hearing what questions were coming up and offering some of the suggestions that he had for responses, so he was engaged.”