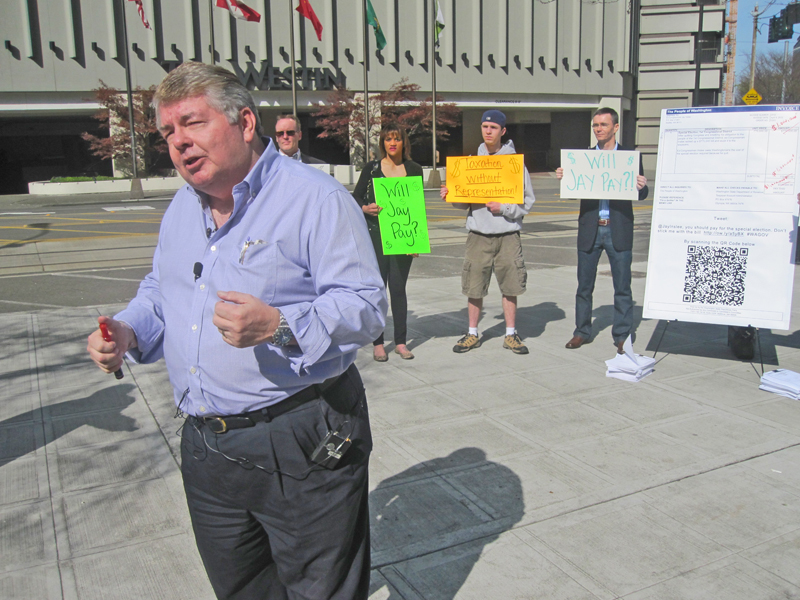 If Inslee Had Delayed Resignation, Washington Taxpayers Might Have Saved $1 Million, Officials Say

Of All the Rotten Timing: Ex-Congressman Quit in March for Sake of Gubernatorial Campaign – GOP Says Inslee Ought to Pay 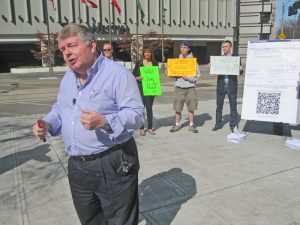 SEATTLE, April 10.—When Congressman Jay Inslee quit his seat in Congress last month to campaign for governor, he said it was because he wanted to get to know the voters “from Hoquiam to Humptulips, Starbuck to Sequim.”

And he’s doing it by handing them a bill for $1 million.

Officials confirmed Monday that if Inslee had waited, he could have spared Washington state the expense of a special election. By leaving office March 20, and not waiting until the end of filing week in May, Democrat Inslee has forced an election that will fill the seat for a single month. Taxpayers statewide will have to pay the bill.

Call it Inslee’s million-dollar boo-boo. The state Republican Party says the former congressman deserves to pay for it, in more ways than one. And the state Democratic Party is – you guessed it – searching for a way to blame it all on Republicans.

Somehow that seems a bit of a stretch. Meanwhile, the Inslee campaign is saying nothing about it at all.

The million-dollar burden, apparently something Inslee never considered when he decided to quit, is fueling some of the most delightfully nasty political invective ever heard at this stage of a campaign. Asks Kirby Wilbur, chairman of the state Republican Party, if Inslee could be this sloppy in making a carefully considered strategic campaign move, what do you think he’s going to be like as governor? “If he’s this smart when it comes to state-government work, it makes you wonder what else he’s going to miss.”

Inslee announced his resignation last month after months of speculation about his political future. His campaign hadn’t exactly been catching fire. A few partisan Democratic polls aside, the most recent polling had shown that Republican Rob McKenna, the state attorney general, was running far ahead. Pollster Stuart Elway gave McKenna a nine-point lead in February, 45-36. SurveyUSA gave McKenna a 10-point lead, 49-39.

The notion was that Inslee, serving his seventh consecutive term in Congress from the suburbs north of Seattle, might make a better impression on Washington voters if he wasn’t taking the Red-eye back to D.C. every weekend. In that he had some statistical backup. Nine members of Congress ran for governor in 2010, and four of them won, including the two who resigned. It wasn’t as if Inslee had any future in Congress – this state wouldn’t allow him to run for governor and U.S. House on the same ballot. 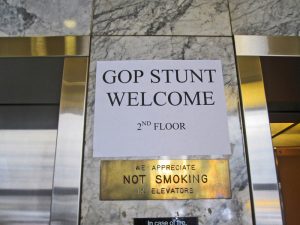 The right spirit: Inslee campaign greets Republicans as they drop off invoices at campaign headquarters.

And so, after months of denial, Inslee made his announcement March 10. “I am putting it all on the line,” he said. “I am all-in.” Curiously, he said the voters of the district wouldn’t suffer by his absence – they could be represented just as well by the state’s two Democratic senators.

Inslee had one element of political timing in mind. By leaving office after March 6, he avoided triggering a winner-take all-special election in June. Because the Democratic field in the first district is crowded, that election almost certainly would have gone to John Koster, the only Republican contender. Trouble was, Inslee wasn’t thinking about another political calculation – and critics say he should have done a better job of reading state elections law.

A Matter of Apportionment

Inslee’s decision meant the seat would sit vacant and the 1st district would go without representation at least through the election. But what about the month between the certification of election results in December and the seating of a new Congress in January? Because Inslee quit before filing week, that left the seat vacant more than eight months, and state law said the vacancy had to be filled. Gov. Christine Gregoire, a Democrat, spent weeks reviewing the matter and finally told reporters that the law was clear – an election had to be called. And it couldn’t be the same election that would fill the seat starting in January. That’s because the boundaries of the first congressional district have been changed by redistricting, and the new boundaries take effect Jan. 1. Under federal law, the state must make a distinction between the old and new boundaries where congressional seats are concerned. So that means there must be a separate election in which the voters in the old 1st district will decide, not the ones in the new 1st district. So separate primary and general elections must be held to fill a seat for a term that will last a single month, creating a massive headache for all involved.

“If he had waited until the end of filing week, there would have been no elections whatever,” said David Ammons, spokesman for the secretary of state’s office.

Now get this – the extra elections are going to cost Washington state taxpayers an additional $1 million, even if they don’t add a dime in expense. Washington already is running primary elections on Aug. 7 and Nov. 6., and the only incremental cost might be a couple of additional pages in the state voters’ pamphlet and perhaps a little overtime for state elections officials. 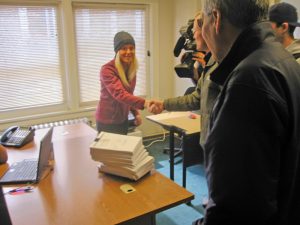 A most gracious welcome from the Inslee staff as GOP delivers the bill.

But who pays? That’s the issue. State law apportions elections expenses between states and counties. Additional congressional races mean Washington-state taxpayers will have to pick up a greater share of the cost of the elections in the first congressional district. So under a longstanding reimbursement formula established by the state auditor, Inslee’s decision is a $770,000 windfall for the elections departments in King, Snohomish and Kitsap counties, and a $770,000 hit on taxpayers statewide.

And not just that. The secretary of state’s office is telling the Legislature it needs an additional $225,000 for a rather minimal postcard mailing campaign to tell voters in the district what has happened. That’s because the whole thing is so blamed confusing.

Wilbur ran the table in a campaign sense at a news conference Monday outside Inslee campaign headquarters in downtown Seattle. The GOP chair stood in front of a giant-sized “invoice” addressed to Jay Inslee. It said: “DIRECT ALL INQUIRIES TO: The People of Washington.” And “PLEASE REFERENCE ‘I’m a quitter’ in the memo line.”

Wilbur said Inslee could write a check right now to the state of Washington for $1 million from his campaign funds and take care of the additional expense he has handed Washington-state taxpayers. It’s not as if the state has any money to spare right now, Wilbur said. Why, you could hire 20 kindergarten teachers for that kind of money. “If he’d waited, we wouldn’t be spending money at all – or if he’d been honest with the voters when he ran for office in 2010,” Wilbur said. That presumes, of course, that voters would have said no to a congressman who planned to quit halfway through.

It’s not as if it was a secret Washington was redistricting this year, Wilbur said. Happens every 10 years, right like clockwork. And Inslee might have been able to figure out what would happen if he’d just read the RCWs. 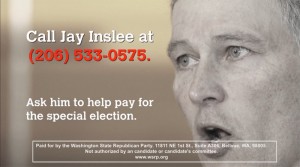 “If he didn’t think about that, I worry about what else he’s not going to think about if he’s elected,” he said.

Republicans collected 2,500 signatures over the Internet to accompany their mock invoices. Party volunteers carried them inside and dropped them on a desk in the Inslee campaign office.

The Inslee campaign wasn’t responding Monday to media inquiries. And the only response from his side came from the state Democratic Party, which issued an odd statement on its website. It blamed the whole mess on Republicans. The statement says in part, “Instead of responsibly planning and budgeting for the special election to fill the vacant 1st Congressional District seat, the McKenna campaign’s Thurston County co-chair, who is also the Secretary of State, released a questionably high cost estimate that reeks of politics. The conflict of interest is clear.”

Ammons, the spokesman for secretary of state Reed, points out that the figures on which the apportionments are based come from the elections departments in the three counties. “Those aren’t our numbers,” he said. “They come from the three counties that are involved in this election, all of which, by the way, are run by Democrats.”