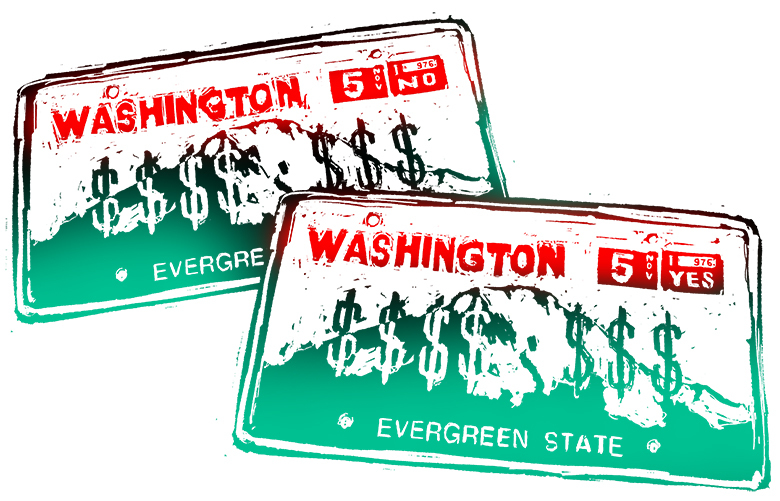 I-976 and the multibillion-dollar question

Should I-976 survive the legal challenge headed its way, a multibillion-dollar budget gap will need to be filled. Lawmakers on both sides of the aisle have proposed strategies for backfilling the gap.

At the moment, transportation funding in Washington State comes from two primary sources: a gas tax and vehicle fees such as car tabs. Additionally, tolls and ferry fares are used to supplement revenue in certain areas. According to a fiscal impact statement released by the Office of Financial Management, I-976 would result in a total revenue loss of just under $2 billion for the state, and over $2.3 billion for local governments.

Tim Eyman, the sponsor behind I-976, has referred to a “$3.5 billion net surplus and record revenues” as “more than enough revenue to backfill any affected government program.” The money to which Eyman refers, actually $3.1 billion according to the most recent state projections, will require breaking into funding allocated for natural disasters and other unforeseen events, an idea unpopular even with some Republicans.

Senator Christine Rolfes, Chair of the Senate Budget Committee, said Eyman’s idea would mean “forcing recessionary policies and recessionary cuts at a time when the state is not facing a recession and will put us in much weaker place when we actually have a national recession.”

Another concern in Olympia is potential interagency competition for funding. Senator Steve Hobbs of Lake Stevens predicted a battle among agencies to maintain their current level of funding amid cut-induced scarcity:

I would probably just do at first a straight across [cut]…then, Hunger Games-style, the agencies or departments would have to defend what they’ve got”, Hobbes told the Seattle Times

After the implementation of cuts which run evenly across agencies at the outset, Hobbs would prioritize infrastructure maintenance for roads and bridges and funding for the Washington State Patrol.

Governor Inslee has postponed all future transportation projects until a path forward is charted.

I will work with legislators, agency leadership and stakeholders on how best to respond to the impacts of this initiative”, said Inslee in a prepared statement.

Some Republicans are less convinced that transportation projects will be adversely affected, pointing toward a surplus in tax collections and advocating for proposals that redirect sales tax revenue toward transportation funding:

The problem with transportation funding is not usage, but all the solutions are based on that premise,” said Senator Phil Fortunato of Auburn.

“The main cost driver is inflation. The existing sales tax on motor vehicles represents an inflation-linked funding source that non-partisan analysis shows will give the state more money for roads than the other schemes being discussed — and it gives taxpayers a well-deserved break.

While the initiative is slated to go into effect in April, an impending legal challenge could put it on hold.

On Monday, Republican Senator Steve O’Ban of Pierce County sent a letter to Attorney General Bob Ferguson, calling for his office to recuse itself from the I-976 proceedings and to hire outside legal counsel to defend the initiative.