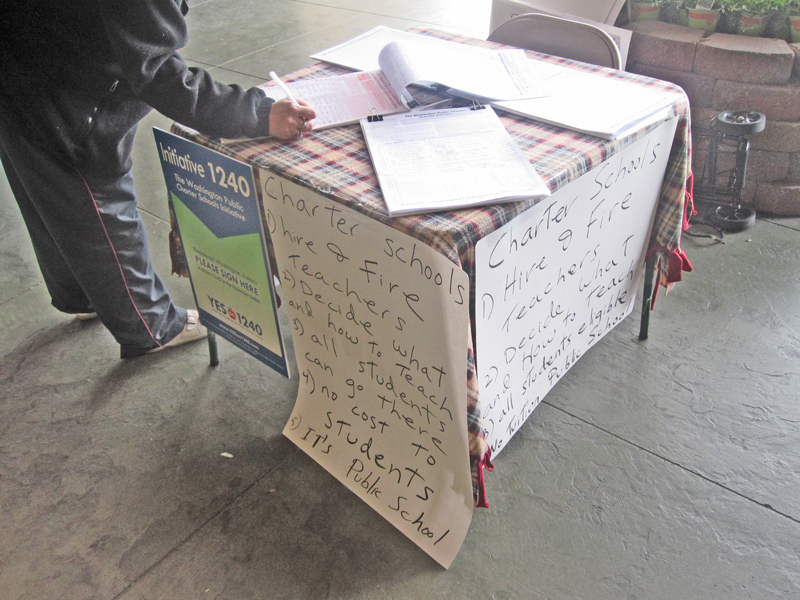 House Republican Counsel Digs Up the Record That Proves It – Charter School Measure Might Tie for Second, Though 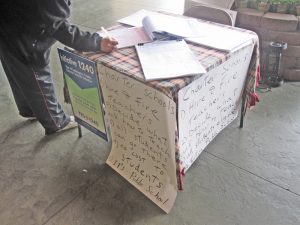 At the Lacey Wal-mart over the weekend, this year's charter-school campaign gathers signatures.

OLYMPIA, June 20.–Even as sponsors of Initiative 1240, this year’s charter-school initiative, mount a lightspeed signature-gathering drive, it looks like they won’t set a state record after all.

They have just 21 days to collect 241,153 signatures – actually more like 300,000 if they want to be safe. The clock started ticking Friday, when a Thurston County Superior Court judge approved a ballot title written by the state attorney general’s office, rejected a challenge from the Washington Education Association, and sent the campaign scurrying for the printers. The petitions were on the streets by the weekend. The deadline day is July 6. Sponsors are going to have to pay big money to canvassing crews, and they might thank their lucky stars that Microsoft zillionaire Bill Gates is on their side.

If they make it, they’ll tie with last year’s Initiative 1183, the measure that closed the state liquor stores. That one also qualified in 21 days. Cost $2 million to do it. As far as anyone could remember, it was the fastest signature drive ever. No one around the Capitol today had seen anything like it. All talk was that it was the state record.

Washington State Wire even wrote a story or two that said just that.

Except – well, it’s not the record, after all. And it just goes to show how short the memories are around the Capitol, the weakness of the oral tradition, and maybe the fact that reporters don’t spend as much time as they should spelunking in the state archives, or at least this one, anyway.

Bearer of this disquieting news is Allen Hayward, the House Republican leadership counsel, and a bit of a historian of the initiative process. Hayward is working on a presentation he plans to give this fall to a continuing legal education seminar for attorneys working at the statehouse, to mark the 100th anniversary of the initiative and referendum in Washington state. It was in November 1912 that Washington voters approved the constitutional amendment that gave the people the right to pass their own laws.

Back in 1973, Hayward tells Washington State Wire, this state witnessed what was probably the most astounding initiative campaign in state history, for Initiative 282. Bruce Helm, a furniture salesman from Alderwood Manor, was outraged by a 192 percent salary increase that lawmakers had granted themselves that year. Even stinkier, Helm thought, was the fact that lawmakers added an “emergency clause” – meaning voters couldn’t overturn it with a referendum. Instead, Helm had to file an initiative, which required twice the number of signatures.

Maybe the whole thing might seem a little less stinky today when you consider that judges and statewide elected officials hadn’t gotten a raise in years, and the bill that session increased lawmakers’ salaries from a meager $3,600 annually to $10,500. But still. 192 percent?

Helm had to worry about potential lawsuits. Opponents might have claimed a referendum was required to overturn the law, and since a referendum couldn’t be filed, well, then, he was just out of luck. So Helm couldn’t just run an initiative to cancel the increase. He had to offer a counterproposal. Under Initiative 282, salaries would increase 5.5 percent over 1965. For lawmakers, that meant a big, whopping $200 increase, to $3,800 a year.

But here’s where things might really cause jaws to drop, even by modern standards. Helm started rather later in the calendar. He filed his initiative on June 12. The turn-in date, just like this year, was July 6. That’s just 24 days.

We can learn that much from the secretary of state’s website, but that doesn’t tell us everything we need to know. There’s another step in the process – then as now, the attorney general’s office has to write the ballot title. The easy-to-find records don’t indicate when that happened, so Hayward had to go to the state archives. He found the proof he needed in an Oct. 3, 1973 letter from Donald F. Whiting, assistant supervisor of elections, to a Mr. Alan Dougherty of Pullman, Wash. Future historians take note.

In those days, 117,000 signatures were all that was required – eight percent of the number of ballots cast in the last gubernatorial election.

On July 5, a full day early, Helm turned up at the secretary of state’s office. In just 17 days he had managed to gather an astonishing 665,495 signatures. Just a tad bit more than was needed for a safety margin.

The next day he turned up again at the elections department. He had another 34,126.

It sort of goes without saying that the initiative didn’t have any trouble making the ballot. It went on to pass with 81 percent of the vote — the third most popular initiative in state history. The other two? There was I-180 in 1952, which legalized colored oleomargarine, 84-16, and I-58 in 1932, permitting permanent voter registration, 83-17.

Next, of course, someone did file that lawsuit claiming a referendum was required, and the Supreme Court rejected it. Helm’s strategy worked just as it was supposed to. Then the chairman of the Senate Ways and Means committee demanded copies of the petitions under the state Public Records Act. The enquiring member wanted to know which particular state employees had advocated slashing salaries for legislators. In those days, the secretary of state’s office felt free to say no. For some reason, a suspicious Secretary of State Lud Kramer figured the committee chairman had some nefarious purpose in mind. The chairman of the state Democratic Party filed a lawsuit. The secretary of state’s office won in Superior Court — but because the litigation never reached the appellate level, the ruling never set a precedent. Ironically, it is exactly the opposite position taken by current Secretary of State Sam Reed in the more recent litigation over disclosure of petitions for Referendum 71, the 2009 vote on same-sex domestic-partnerships.

And finally, in 1975, the Legislature got its raise anyway. The House and Senate took a two-thirds vote to overturn one of the most popular voter-approved initiatives of all time. The bill granted salary increases all the way around — elected officials, judges, everybody. Timing was everything. There was an emergency clause on that one, too, eliminating the possibility of a referendum, and even better, lawmakers waited until the 148th day of that lengthy session to pass it. So Gov. Dan Evans was able to wait until just a couple of days before the initiative turn-in deadline to sign the bill into law. In 1975, the Legislature outfoxed the people. There was no way for anyone to pull a Helm again.

But back to the record-books. That’s the important thing here. Hayward says he has scoured the secretary of state’s website, and no other initiative comes close. “I think that I-282 will always be the all-time champion for both speed and numbers of signatures,” he said. “This is in part because in 1977 the Supreme Court in the I-333 ballot title case ruled for the first time that opponents to an Attorney General ballot title or summary could take it to court.  A new built in time blocker.”

Something else worth noting – it was another 20 years before paid signature gatherers were commonly used in initiative campaigns. Helm ran his campaign the old-fashioned way, with volunteers. It might make his feat seem all the more astonishing, but he had one tool available to him that isn’t available today. A campaign could run ads in newspapers that contained full petitions. Supporters could fill them out and mail them in. It helps explain how Helm managed to discover 34,000 signatures on the final day. He opened his mailbox. Nowadays there are sharp restrictions on things like fonts and the size of petition sheets that would likely make that practice impossible, Hayward says.

So unless I-1240 steps up the pace, pays an even higher price for signatures, and turns in its paperwork four days early, it’s going to be in the shadow of I-282. Calling Bill Gates: Time for another check!