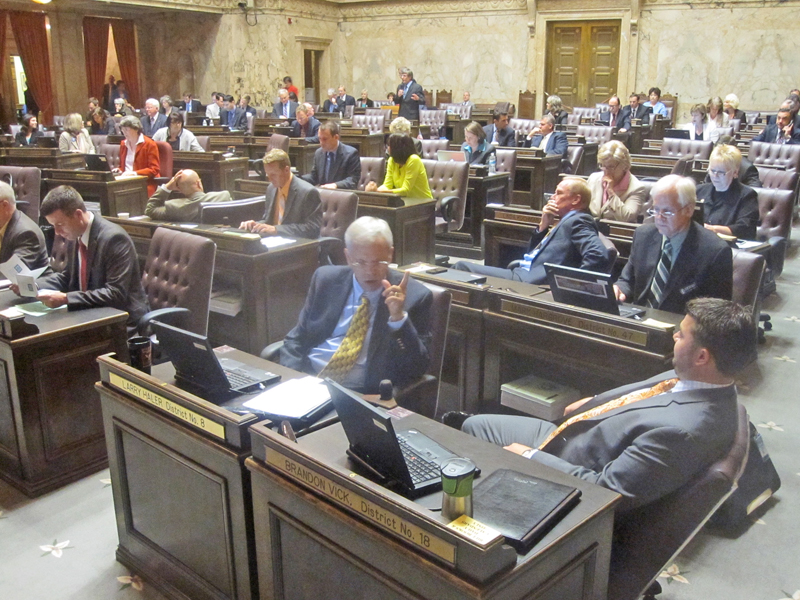 Without Bill, $40 to $60 Million in Refunds Will Soon Have to be Delivered – Senate Working on Alternate Approach 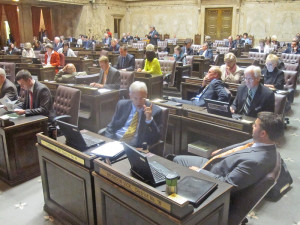 For 24 minutes Thursday the House came back to life.

OLYMPIA, May 31.—For 24 long minutes Thursday, the state House came back to life, passing a bill that would reinstate Washington’s estate tax for married couples who use a common estate-planning technique.

It is an arcane issue with a bit of partisan controversy, but one that carries a multi-million dollar impact. If the Legislature acts within the next week or so, the state might avoid having to make refunds of $40 million to $60 million to a handful of relatively wealthy estates that already have paid their taxes over the last seven years. An alternative Republican plan gets a hearing in the Senate today. But there was an even greater significance to the action on the House floor Thursday. The 51-40 vote on House Bill 2064 marked the first actual business done in the state Legislature during its current special session, now in the 19th of 30 days.

And so a full House of lawmakers found themselves back at their desks for the first time since their regular session ended on April 28th. Some from farm country joked that they had to think hard as they tried to remember how to knot their neckties. And some shook their heads at the fact that they had to drive all the way across the state to pass a single bill. Should there be negotiation with the Senate over the estate-tax measure, as appears likely, they may have to repeat the trip next week to send a new version of the bill to the governor’s desk. Yet there remain plenty of bigger issues to resolve — there is a budget to pass, a transportation-tax measure to debate, and a host of policy bills to work out – none of which anyone seems ready to deal with. Key lawmakers are negotiating those issues behind closed doors, and there is no indication of progress.

All Maureen Walsh of Walla Walla could do was sigh. The Republican state representative commutes 320 miles each way, one of the longest travel distances of any legislator in Washington state. “I wish we were voting for a budget so we could be done for the year,” she said. “That’s the hard part – just being in limbo.”

If you take Thursday’s House session and add the six minutes of work the Senate accomplished the first day of the current special session, when it passed an opening-day resolution, the combined chambers of the Washington state Legislature have conducted 30 minutes of official business since they reconvened on May 13. 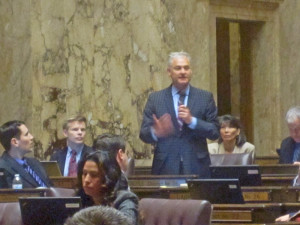 It was the second time through for HB 2064 — the House had passed the measure a month ago, just before  the end of the regular session, but because of legislative rules the bill had to be revived by another vote during the special session. And if it wasn’t for the fact that big money is at stake if the Legislature acts fast, Thursday’s session might not have happened at all — most other battles are being reserved for the big end-of-session dealmaking between the House Ds and Senate Rs.

Driving this one, however, is a series of court decisions the Legislature can’t ignore. First of them is a Supreme Court ruling last year that a big chunk of Washington’s estate tax is invalid, for technical reasons. Washington’s estate tax, created in 2005 in response to complicated changes in federal law, is imposed on estates worth more than $2 million. Though the death has long been an issue for some in Republican ranks, it does not appear to be a popular cause; indeed it affects only a handful of parties, just 300 a year. Opponents tried to stir a revolt in 2006 when they filed Initiative 920 but failed to get much of a rise from Washington voters. The voters said yes to the death tax by a 62-38 percent margin.

Nevertheless, attorneys for two well-heeled estates found a technical argument against a portion of the estate tax – that in drafting the 2005 law the state had failed to properly account for a common estate-planning technique used by married couples, in which taxes are deferred until the second spouse dies. The Supreme Court found in their favor with its so-called Bracken decision, named for the estate of one of the plaintiffs, the late Sharon Bracken. It applied specifically to just the two plaintiffs. But technically it affects every estate in which the surviving spouse died after 2005 and used what is called a qualified terminable interest trust, or Q-TIP. The tax remains in place for those who do not use that particular estate-planning technique.

State officials say there is no question that the two estates get their money back, roughly $6 million. But once the decision was handed down, the state Department of Revenue was flooded with refund requests from other estates that were unwilling to take a chance by joining the court case and thus incurring big legal bills. Some 70 refund requests have been received so far; more may be in the offing. Total potential liability for the state is $138 million. Agency officials say they are compelled by recent lower-court orders to begin cutting refund checks Monday unless the Legislature takes action. Lawmakers question whether the deadline really is that hard and fast.

At a time when lawmakers are scrambling for cash, it might seem odd that there is any debate at all about a measure that would save the state $160 million over the next two years. That includes the refund checks for prior-year taxes and the estimated revenue from the tax going forward. But House Republicans, never keen on what they call death taxes in the first place, say they see a big problem with the way the House measure makes the fix. The bill aims to retroactively clarify Washington tax law by declaring that all estate taxes collected since 2005 are valid – with the exception of the two estates covered by the court decision.

“It crosses every line in the constitution, and the fact is that this is not a loophole,” said state Rep. Cary Condotta, R-East Wenatchee. “People did exactly as the law prescribed, and to go back and change it now – what are we going to do next year? Are we going to tell everybody who bought a car last year that now they need to go back and pay the trade-in tax because we have decided we need more money?”

Changing the law after the fact is just plain wrong, declared state Rep. Matt Manweller, R-Ellensburg, a professor of constitutional law at Central Washington University. The constitution’s prohibition on ex-post-facto legal penalties is one of the most fundamental precepts of American law, he said. “We are headed down a very uncomfortable road in the Legislature that says all sins are forgiven if these sins are done in the name of education spending. And that is a very seductive argument because we love education. The only problem with the argument is that it is not true – how we raise money is just as important as how much money we raise.”

But one might suspect retroactivity isn’t the only issue. The state’s ability to make retroactive fixes to taxation law in response to court decisions appears to have been established by precedent. In 2010, for example, the Legislature passed a retroactive fix to another Supreme Court decision, the so-called ‘Dot Foods case,’ which had an even bigger impact on the state budget. In the Senate, controlled by the Republican-leaning Majority Coalition Caucus, a competing proposal has been introduced by Ways and Means Chair Andy Hill, R-Redmond. That one also would make the retroactive fix, while increasing the threshold for taxation to $5 million. Senate Bill 5939 gets a hearing Friday at 10 a.m.

House Finance Chair Reuven Carlyle, D-Seattle, says the debate in the House appears to have more to do with ideology than matters of law. “This is not a hard problem,” he said. “This is not a complex issue. This was a technical lawsuit. A handful of estate attorneys saw there was no reference to the federal statute [in state law] any longer, and this should be an easy fix. The fact that folks want to use a technical lawsuit to try to eliminate the estate tax is really an affront to the people who directly voted on the issue, and it is really beneath us as a state to let it stand. Lawsuits like these happen with almost any enterprise, and a modest fix is the responsible fiduciary thing to do.”

If the Legislature fails to act, Carlyle said it will create a “patently bizarre” situation in which the estate tax applies to single and divorced people, but not to married and widowed people. He said the House Democrats have staked out a position that can easily be defended.