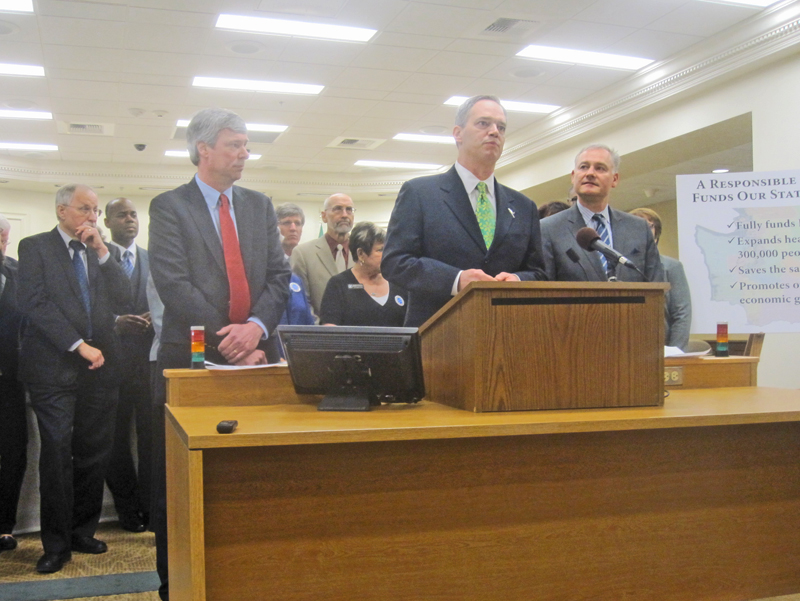 House Dems Come Up With Biggest-Spending Budget Plan Yet – Can You Say Special Session?

Compromise Nowhere in Sight With Budget Hawks in Senate – Dems Would Require $1.3 Billion in New Taxes 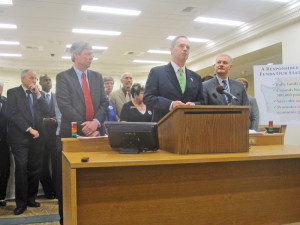 OLYMPIA, April 10.—House Democrats Wednesday offered up their spending plan and made it clear they aren’t in a mood to reach a final deal anytime soon. Their $34.5 billion budget requires $1.3 billion in new taxes and sets up a war with the budget hawks in the Senate. And you can say it is the legislative equivalent of the annual public appearance of Punxsutwaney Phil.

Now that the Legislature has seen the shadow of this budget proposal, you can be pretty sure the session will last another six weeks.

The House plan, written by Democrats alone, offers a sharp contrast to the no-new-tax budget that was passed out of the Senate last Friday with a bipartisan 30-18 vote. The Senate version, written by a Republican-leaning Majority Coalition, included plenty of input from both sides, and it managed to keep spending to $33.3 billion for the next two years without raising a single tax. Certainly Senate Democrats had plenty of quibbles. But where Senate leaders tout the potential for bipartisan agreement that might require a few hundred million dollars’ worth of compromising, House Democrats appear to be taking a much more partisan position. The proposal they released Wednesday was so far north of the other chamber that it is hard to imagine a quick deal being struck. The Legislature’s current 105-day legislative session is scheduled to end April 28, a little over two weeks from now, and if an overtime session wasn’t likely before, it is now all but certain. Special sessions, once begun, run 30 days — and if the Legislature follows tradition, no deals will be done until the deadline approaches at the end of May.

House Democrats said they took their stand because they had to. They said they were driven by the Supreme Court’s recent McCleary decision, which mandates big increases in spending on K-12 schools, somewhere on the order of $1 billion or more, and they said they didn’t want to chop other areas of state spending to do it. They favor $1.3 billion for McCleary spending, some $300 million more than the Senate. And they repeatedly called their proposal “responsible” and “grown-up” – thus implying that the plan from the other side of the rotunda is not. “We are proposing a responsible, grown-up balanced budget,” said state Rep. Reuven Carlyle, D-Seattle, chairman of the House Finance Committee.

The Senate responded in kind. “Rather than go straight to raising taxes, lawmakers should be willing to prioritize and make difficult decisions,” said Senate Republican Leader Mark Schoesler, R-Ritzville. “That’s what the public told us it wants us to do – it’s time that House Democrats put on their big-boy pants and listen.”

The House Democrats’ budget proposal is notable in several ways. For one thing, it is the biggest-spending and biggest-taxing budget proposal to be offered in this year’s budget debate, from any of the Democratic players in the Legislature. Last December former Gov. Christine Gregoire proposed spending $34 billion. Two weeks ago Gov. Jay Inslee proposed spending $34.4 billion. And if you added up all the amendments and all the objections offered by Senate Democrats when the upper chamber debated its budget last week, you might say the Senate Ds are at $33.9 billion.

But the House Democrats’ proposal matters more than any of the others, because it is they who will be doing the dickering with the Senate. And they insist it is going to take both tax increases and big spending to satisfy all of state government’s needs. Even though Washington state expects $2 billion more in tax revenue for 2013-15, the House position essentially demands an increase in state spending of $3.4 billion.

The House gets there with $1.3 billion in new taxes, about half of it by ending business tax exemptions – though it is worth noting that the House hit-list is considerably different than the one suggested by Gov. Inslee last week. The other half comes come from the continuation of temporary taxes on beer and service businesses that are due to expire in June – a plan that Republican critics say breaks a promise made when the taxes were imposed in 2010. There are other not-so-obvious revenue sources embedded in the budget. The Democrats are proposing that state colleges and universities raise tuition again, by three to five percent annually — which amounts to a hidden tax increase on students and parents. The Senate is proposing a three percent reduction.

The Democrats also are proposing that the state spend every dime in its rainy-day fund, which will contain $575 million by biennium’s end. The Senate would leave that fund intact. There lies one of the bigger ironies behind the Democratic budget proposal. Democrats led the legal challenge that prompted the state Supreme Court this year to overturn a voter-imposed rule which requires a two-thirds vote of the House and Senate for tax increases. But that ruling hasn’t made their job any easier. It takes a three-fifths vote of the Legislature, 60 percent, to tap the rainy-day fund, meaning Republican votes will be required. And House Appropriations Chairman Ross Hunter, D-Medina, said he doesn’t have them yet.

Can’t Do it Without Taxes

Hunter said there is no way around big revenue increases. “The House, the Senate and the governor all face the same problem,” he said. “Our current services and the expansion of K-12 required by the Supreme Court cannot be funded within the current revenue box. There are four ways you can get out of the situation. You could raise revenue, you could cut services, you could sweep the capital budget or other one-time funds, or you could do gimmicks and pretend.

“The House and the governor’s proposals are similar, not identical. I’m sure that we could have big fights about this, but they are similar balanced solutions with modest revenue additions, savings, and some transfers. The Republicans in the Senate depend completely on unspecified cuts, unconstitutional transfers and gimmicks instead. It would be hard for the treasurer to sell bonds at reasonable prices if we adopt that strategy, and we will be back in town fixing inexplicable problems after the first caseload update this fall. The difference in the two approaches is substantial.”

Among other things, the House Democrats are critical of a Senate plan to transfer $166 million to the state operating budget from the school construction account, which is paid for timber sales. The money would be replaced by bonds, essentially obligating the state to make up the money eventually – and the interest payments would . “It’s like buying your groceries with a credit card,” Hunter said. Though the state has done similar things in the past, and at one point some 30 years ago it borrowed from the school construction money as the Senate is proposing currently, Hunter said the plan is a clear violation of the state constitution, and one that would likely get the state in hot water with the courts. If the Supreme Court followed the pattern established by the McCleary ruling, he said it might even bar the state from requiring local voters to put up a share. “If you try this one in court I think the Supreme Court might say you have to pay all of it.”

Carlyle said the Senate’s reluctance to consider any taxes and any tax-loophole closures doesn’t pass the straight-face test. He noted that since 1995 alone the Legislature has created 277 new tax exemptions and preferential rates for business worth about $3.6 billion, and he said the state has about 640 total. Instinct alone ought to tell you that not all are justifiable. “When we write the budget, we sit down, all of us, and we go line by line, and we provide a level of rigor that is incredibly detailed and difficult, and yet there are tax exemptions that sit on the shelf for decades without being review,” he said. “That old-fashioned era is unsustainable. It is over.”

Among the tax exemptions targeted by House Democrats are an extracted fuel exemption that largely benefits the oil industry, and preferential business and occupations tax rates that benefit the insurance business and travel agents. A sales tax exemption for residents of Oregon and Montana doing business in Washington would be repealed. Where the “temporary” taxes are concerned, the House would make permanent a 2010 B&O surcharge of .3 percent on service businesses – meaning doctors, lawyers, accountants and others. It also would make permanent a surcharge on beer taxes, though unlike the governor the House would reduce that tax rate.

And so the budget war finally can begin – one that assuredly will some time to play out, despite pro forma protestations from Democratic leaders that they can get the job done in time. House Speaker Frank Chopp, D-Seattle, made a rare public comment when a reporter broke with tradition and unexpectedly asked a direct question of him at the Wednesday news conference. Chopp said, “We intend to work as hard as we can, as quickly as possible, to get the job done.”

There aren’t many who think it’s going to be easy. “This budget was not put together in a bipartisan way – and it shows,” said House Republican Leader Richard DeBolt, R-Chehalis. “When the Senate rolled out its budget, there were members from both caucuses present, everyone had input and ownership, and the result was a bipartisan and balanced proposal. The House Democrats would have been wise to follow the Senate’s lead, put the partisan rhetoric aside, and produce a budget that members of both caucuses could support.”

And Senate Majority Leader Rodney Tom, D-Medina, said the House failed to seize the opportunity to steer toward the middle. “I think we showed in the Senate what can be done when you put partisanship aside and work together for the betterment of the state,” he said. “With nearly two billion dollars more coming into the state, House Democrats should have reached out to Republicans and worked together to prioritize spending within existing revenue, rather than run to taxpayers with their hands out for more money.”