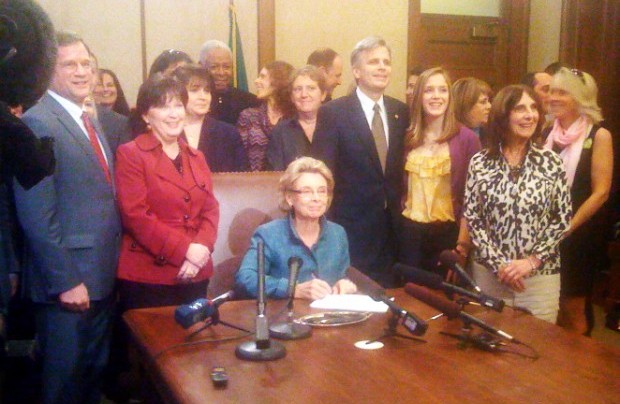 Tensions Were Defused When Gregoire Brokered Compromise – Measure Allows Teachers to be Fired for Poor Performance, Jury Still Out on Bargaining Provisions 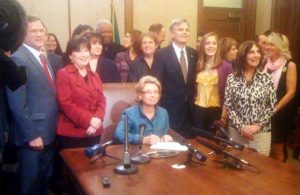 OLYMPIA, March 8.—Gov. Christine Gregoire signed a controversial teacher-evaluation bill into law Thursday, ending an argument that a month ago threatened to become the blowup of the session, rather than Friday’s dramatic budget fight in the Senate.

Senate Bill 5895, backed by business groups and education-reform organizations, for the first time makes termination of teachers and principals a possible consequence of a poor job evaluation. At least where teachers are concerned, it is a hit on union seniority practices that have made last-hired, first-fired the rule.

The all-smiles ceremony in the governor’s office Thursday did little to convey the fury of this session’s battle, which at one point shut down a Senate committee and threatened civil war among Senate Democrats. It was the precursor to the dramatic vote on the Senate floor Friday night, in which three middle-of-the-road Dems bolted and threw their support to a Republican budget plan. And a similar scene was averted on education reform this session only because Gregoire intervened.

The final compromise may have removed a few of the measure’s teeth. But if you look at the bill-signing photo closely, you might have notice one thing. Lining up with the governor for the official bill-signing shot were lawmakers and reformers – and no one from the Washington Education Association was in the room. If it was a compromise, the union says, no one asked the teachers.

The measure piggybacks on a teacher-evaluation measure passed by the Legislature in 2010, which enacts a four-tier method of evaluating educators’ job performance – “unsatisfactory,” “basic,” “proficient” and “distinguished.” School districts statewide are supposed to begin using it in the 2013-14 school year.

This year’s bill directs the way the evaluations are supposed to be used. Teachers who rank in the unsatisfactory category two years are to be cut. Longtime teachers are expected to progress at least to the “proficient” level. Poor-performing educators are supposed to be given measurable benchmarks to meet.

But the jury is still out, because of the deal-making compromise that got the bill through the Legislature. The final bill allows unions to bargain with school districts about the way student performance will be used and the weight that will be given to the evaluations in termination decisions.

Gregoire says the measure is a landmark bit of law. “For the first time, Washington public school teachers will and principals will be able to know exactly what is expected of them, so that they can grow and they can succeed in their profession,” she said.

“They will receive the guidance they need to grow and improve for our students, and for a small number, let’s be honest, they will learn that this is not their chosen profession. Parents will have the confidence to know that the men and women who teach their children and run their schools are clear about what standards they will be held to. This is important, because in my experience parents who lack confidence in our public school system talk about one bad teacher or one bad principal and they then say the public school system is not doing what is right for their kids.”

Gregoire said compromise was critical, because in other states teacher-evaluation proposals have failed because they didn’t have support from all sides.

“In my experience, if you find a great classroom you find before it a great teacher. If you find a great school, you find at the head of it a great principal. And it is a far cry from many [evaluation programs] across the country. Many of them are now failing, they are in discord and anger, and why? They imposed it from the top down. They didn’t do it based on expertise and based on best practices. They didn’t listen to each other and let the teachers and principals and parents and others get involved in the process. for success in this hard work you have to bring competing interests together, and you have to ultimately do what is absolutely best, first, foremost and last for our students.”

Gregoire pushed lawmakers to compromise after legislative warfare brought the Senate to a standstill a month ago. The evaluation bill was one of two big education-reform measures pushed by business and education advocacy groups. The other was a measure that would have allowed the establishment of a modest number of charter schools, which are privately operated schools outside the existing K-12 system that would be eligible for public funding. The two measures encountered a buzzsaw of opposition in the Legislature’s education committees, where established K-12 interests hold sway. Chairmen in the House and Senate blocked votes.

And in a move with no precedent in recent memory, two frustrated Democrats on the Senate Education Committee said they would join with Republicans and refuse to vote on anything else. That shut down the committee and sent the Senate Dems into backroom turmoil. It was the kind of issue that might have resulted in the same parliamentary strategy that wrested control of the budget away from the Senate Democratic Caucus Friday night, as it involved the same middle-of-the-road Democratic senators.

Gregoire called legislative players into a room and kept them negotiating for nine hours over five days. “We spent many hours getting to know one another over M&Ms,” Gregoire said. By focusing on fixes to the evaluation bill, Gregoire defused a situation that might have brought both ed reform bills to the floor. The governor is firmly opposed to charter schools.

“Yet teachers weren’t involved in the drafting of SB 5895. When the Legislature makes decisions that affect teachers and their students, teachers need to be included in the debate. Their perspective and experience are essential.”

But Shannon Campion, director of Stand for Children, one of the education advocacy groups behind the measure, said, “We are thrilled. It is a big step forward for kids. It was certainly a long time coming and it was a team effort. We have lots of appreciation for the efforts of Rep. [Eric] Pettigrew, Sens. [Rodney] Tom, [Steve] Litzow and [Bruce] Dammeier and the governor for negotiating this deal. It is a big step toward getting better teachers for the kids of our state.”