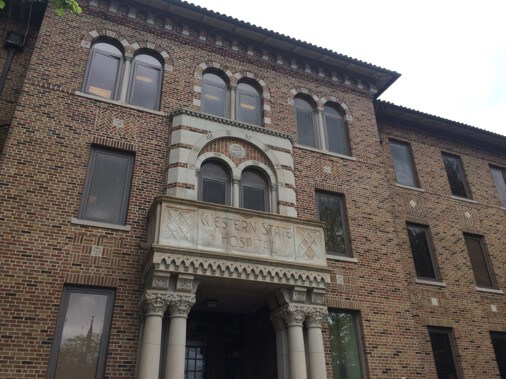 Central to this plan is ending the placement of civil patients in Western and Eastern State Hospitals by 2023. These institutions will become entirely focused on forensic patients. Under the transformation, the number of forensic beds at state hospitals could double.

While the proposal for the facilities is not yet final, the goal is to have about a dozen 16-bed psychiatric facilities.

“We need to take the next step,” said Governor Inslee. “We need to raise our game and we’re going to raise our game by making a commitment to giving people mental health services in the communities where they live. We’re going to stop pouring resources into an outdated model and instated make an investment that is up to today’s day and age systems. So through a combination of mostly state-run options, we’re going to be able to serve nearly all of our civil patients in smaller facilities much closer to home and much more able to sustain the type of treatment that we need.”

Western State Hospital currently has about 850 patients. About 270 of those patients are forensic patients. The waitlist for forensic beds is 233 patients, the highest it has ever been. Out of the 550 civil beds, 234 patients are ready for discharge but cannot be discharged because they still require some level of care but there is nowhere for them to be discharged to.

The governor first proposed this transition in his 2017-2019 budget with the goal of establishing nine new 16-bed community behavioral health hospitals, again with a deadline of 2023, with an estimated cost of $3.8 million. The 2017-2019 budget proposal also included diversion efforts, including more mobile crisis response teams.

Senator Steve O’Ban called the initiative “McCleary 2.0.” He expanded on that statement, “I think this needs to be the primary focus of the legislature in the coming sessions,” now that the question of fully funding education has mostly been resolved.

Senator O’Ban also released a statement that is generally supportive of the governor’s proposal.

“I appreciate the governor’s announcement to set a date certain and force budget writers and state agencies to build out the infrastructure to provide inpatient care for the long-term mentally ill in their communities,” said Senator O’Ban. “We need this new system to be innovative and tailored to the needs of each region, and avoid the one-size-fits-all, rigid approach to long-term, inpatient care that the state hospitals currently offer.

“I am also excited that a community-based approach should solve the problem of patients from other parts of the state who come to WSH and often remain in Pierce County after their release rather than return to their counties of origin because of a lack of community services. With community-based, long-term care facilities sited across the state and replacing WSH, patients will stay and receive care in their own communities, near their support systems, and have no need to come to Pierce County for long-term, inpatient care.”

Rep. Jinkins also supports the proposal, but expressed concerns about the needs of workforce development to address the shortage of mental health providers.

“A lot of our questions were around staff shortage here [at Western State Hospital] and how would we staff other state-run facilities in other places… Again, you can’t build them if there’s not staff, so I think that’s a big part of the balance.”

“The vision for transforming that state’s two psychiatric hospitals into forensic centers of excellence and creating state run community-based facilities to help civil patients get the treatment they need to better live in their communities is the right thing to do,” said DSHS Secretary Strange. “Now five years is a hard push to get this done in an authorizing environment but I know with the dedication we are experiencing with our labor partners, with our legislature, our governor and our community health parents and our folks at DSHS we can do this and we need to do this.”

The specific policy changes and funding needs to achieve this transition will be included in the governor’s 2019-2021 budget proposal.

Since Governor Inslee has taken office, over $360 million has been invested in improving the state hospitals. The improvements include adding 72 additional beds and hiring nearly 760 more staff.