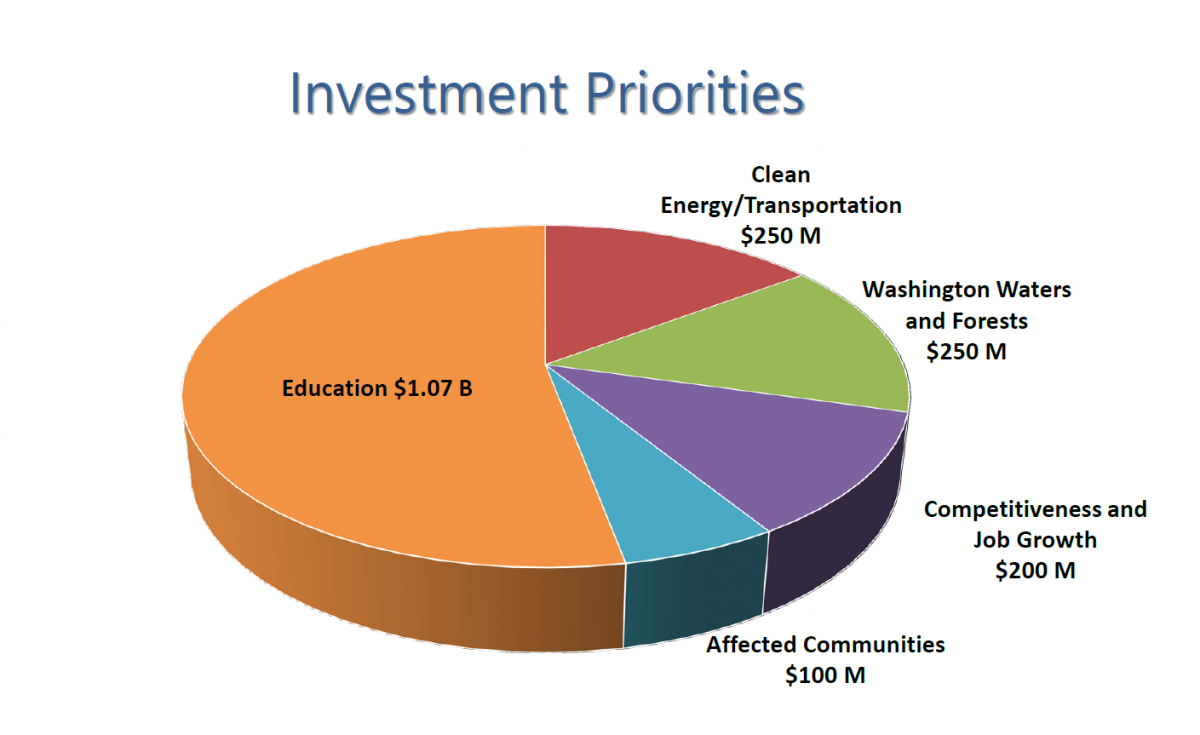 A presentation of Gov. Jay Inslee’s carbon tax proposal was met with a mix of skepticism and praise at the Senate Energy, Environment and Telecommunications committee work session Thursday.

The tax would amount to $25 per ton of fossil fuels (which could add about 25 cents per gallon of gas at the pump) and increase state tax revenue by about $2 billion per year. The tax would get a 2.5 percent increase annually (meaning an extra $100 million would come in on top of that approximate $2 billion in revenue).

Where would the revenue go?

The revenue would be directed to five key areas, to address funding gaps and to ease the impact of the tax, said Chris Davis, the governor’s policy adviser on carbon markets. 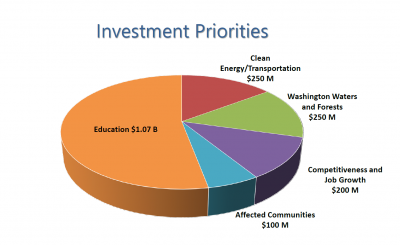 Here’s where revenues from the carbon tax would be directer, according to Chris Davis, Gov. Jay Inslee’s policy adviser on carbon markets. Image from Davis’s presentation to the Senate Energy, Environment and Telecommunications committee work session.

Davis also indicated that the carbon tax would not hit “non-combustion sources of greenhouse gasses.”

If it gets the go-ahead in the legislature, the carbon tax on fossil fuels would kick in May 2018.

“In the rural areas of the state where I live and represent, it’s a much different situation. People are driving long distances to go to work. I think I have the longest commute in the state” Sheldon said at the work session. “Forty-five percent of the people in my county leave the county every day to go to work”

That means, he said, an increase in propane and gas costs would have a hefty impact on rural voters, making a carbon tax a “tough sell.”

“The idea of the carbon tax is, in fact to not pay it,” Davis said.

Brown pushed that companies in her district were looking at this proposal with concern, and that around 200 jobs in her area could go with the carbon tax.

“It’s been hard enough trying to keep those companies in the state without the program that you’re talking about,” she said.

Davis conceded leakage was a hazard with a carbon tax, but that the monies directed toward retrofitting could ease the cost for companies that rely more on fossil fuels.

Davis explained to the Senate committee that his team was looking at models around the world, particularly British Columbia’s model, to create a plan that would have minimal negative impact on companies.

Sen. Doug Ericksen, R-Ferndale, pointed to a concern regarding the increase cost of gas at the fuel pump.

“Is that going to knock a funding source for our roads?” he asked Davis.

In response, Davis pointed to the nebulous nature of gas pricing.

Sen. Reuven Carlyle, D-Seattle, praised how the best practices of the proposal were developed.

The monies could “be put on the ground quickly.” Davis said.

Sen. Kevin Ranker, D-Orcas Island, said he was excited at the prospect of a revenue boost and that the tax plan would be a “triple win” for the state. The carbon tax, he said, could result in cleaner communities, education funding and a jobs boost. He asked Davis how this projected positive outcome could be borne out in reality.

Davis said that via extensive research on other carbon tax models, his team found a critical element for success was through reinvestment of funds into companies and tax relief.