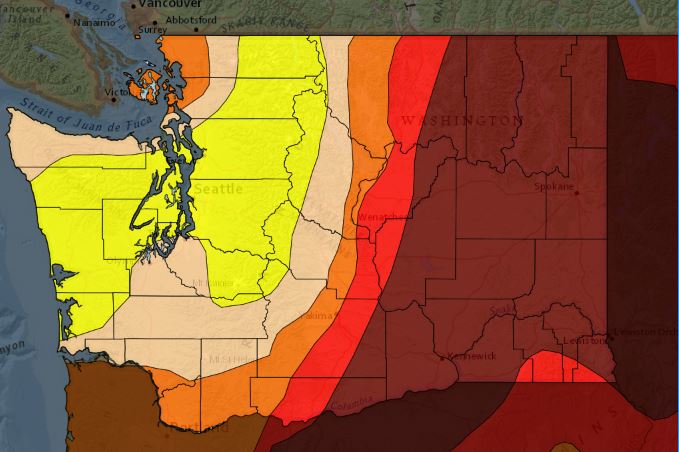 Funding came too late for this year’s wildfires, but will help in the future

Wildfires this year presented a unique challenge to state agencies tasked with fighting them as drought conditions sparked more than 1,900 blazes.

While last September’s sweeping wildfires, driven by an unusually hot wind storm, are dramatic examples of the devastation Washington State fires can bring. George Geissler, a forester with the state Department of Natural Resources, said that this year presented a different set of challenges. The underlying drought made containing this year’s fires more difficult, and more than 600 fires sprung up on the western Washington landscape, which historically has been wetter and less prone to fires.

“What the public sees, and what the news media sees are obviously the big ones, but what they’re missing is over 1,900 fires or responses already this year,” Geissler said. “There are literally hundreds of fires that are being caught weekly. Small fires that the local fire service, DNR, Forest Service, are all catching and keeping them to less than an acre, or keeping them to a half-acre or two acres, that don’t make the news.”

These smaller fires still require firefighting agencies to knock them down aggressively while they’re small, tying up resources. This year’s summer fire season started earlier than usual, with the Department talking about large fires kicking up in June.

Geissler said the Department doesn’t talk about fires as seasonal anymore, only occurring during the summer. Instead, with state resources interwoven with national responses, they’re thinking about a year-round fire season. Even Washington is seeing fires in January and February. Last year, there were fires in all but one month, requiring the Department to bring on more than 500 seasonal workers earlier, and keep them later in the year.

While this funding will be helpful in coming years, it wasn’t available until July 25 this summer, meaning it was too late to really have an impact on this year’s wildfire season, Geissler said.

“The funds do have significant impact long-term. On forest resiliency and fire, there’s a lot of funding there for fuels treatments. We’re working with the National Forest Service to do work on federal, state and private lands to reduce fuel loading as well as improve force resiliency.”

It will also be used to fund the hiring of 80 new firefighters, and purchase of 20 pieces of heavy equipment to be used during initial fire attacks. Most of those resources will come on board by the 2022 summer fire season.

This year’s drought, which caught state officials and legislators off-guard, has also significantly impacted the fire season. All of Washington State is abnormally dry, and more than three-quarters of it is under moderate drought, with nearly 60% in severe drought or worse.

This March through July was the second driest on record, and the third warmest as temperatures were nearly three degrees above normal, on average.

During the legislative session, snowpack across the state was in good shape, and lawmakers didn’t appropriate additional money for drought funding. In places like Ritzville, the drought is so severe that there was roughly a 1% chance that groundwater supplies would be able to recharge by next spring, even with a projected cold and wet winter.

All that means that the grasses and debris that provide the perfect fuel for wildfires were dried and primed for ignition, Geissler said.

“In many cases the stuff that you saw on the ground… the moisture in those is lower than the moisture in a two-by-four at Home Depot — those are kiln dried. So we have fuel moisture levels that drop extremely low, and it’s all because of this underlying long-term drought that’s just slowly removing and lowering the average amount of available moisture in our system.”

Dr. Crystal Raymond, a climate adaptation specialist with the University of Washington’s Climate Impacts Group, said this drought was mostly driven by the record-low precipitation, unlike the 2015 drought which was caused primarily by low snowpack.

Climate change is expected to make Washington summers hotter and drier, and winters wetter, with more precipitation falling as rain instead of snow. This year’s drought was exceptional also because of its dry spring, Raymond said.

The Climate Impacts Group is working on an impacts assessment of this year’s drought, which is due out this winter. Already, Raymond is hearing of crop failures in the state due to a lack of water for irrigation, and impacts to livestock. Salmon are also hurt by streams with low flows and warm water.

Last year, 18% of the state was at least abnormally dry, according to the 2020 impacts report. Roughly two-thirds of surveyed farmers who experienced abnormally dry conditions reported a reduction in crop yield. During the severe 2015 drought, the state Department of Agriculture estimated that it caused between $633 million and $773 million in damages.

“I think it’s really important for people to recognize that these sorts of conditions are going to become more likely in the future and really see these as learning opportunities,” Raymond said.