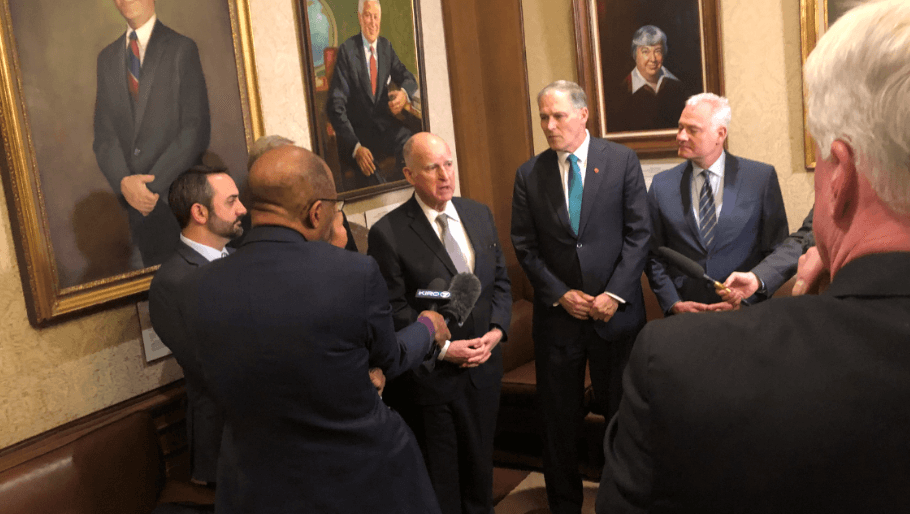 Over the past two years, Brown signed into California law legislation similar to many bills Inslee requested as part of his proposal. Brown left office this year as the longest-serving governor in the state’s history. According to the Los Angeles Times, Brown “left office with an estimated $14.5-billion surplus and an ample rainy day fund.”

Following a meeting with House and Senate Democratic leadership, Brown and Inslee made statements and took questions from reporters.

“Virtually everything that we have proposed this year has been accomplished in California,” Inslee said. “We actually are not inventing a new rocket ship here. We are joining a state that has simultaneously fought climate change and built an economy. And just having someone who can tell that story has been very, very helpful even already.”

Brown stressed that Inslee’s proposal should be seriously considered and, “if anything, improved upon and even made more stringent.” He talked about the positive economic impacts of the actions he took on climate change as governor, saying,

“The result has been spectacular. California’s created 3 million jobs in the last 8 years — nothing like it. The increase in the general wealth of the state: $800 billion dollars. The fact is, California’s very aggressive — and I would say imaginative — environmental record has coincided with a burst of economic activity and job creation. So, I would just say: Look to the long-term. And if you do nothing, things will get worse.”

Brown credited the passage of a cap-and-trade bill to buy-in from several Republicans in the California Legislature; Inslee expressed both a confidence rooted in a strong democratic majority, and an openness to Republican legislators’ input.

“We now have significant majorities of leaders in the state legislature who are ready to act on climate change,” Inslee said. “It does not mean we won’t be open to republican ideas. Listen, any republican idea to reduce carbon emissions, we’re going to take a really good look at and be open to any ideas. But we need to hear those in a spirit of action, rather than excuse-making.”

Earlier in the day, the Senate Environment, Energy & Technology Committee heard public testimony on a bill the governor requested (SB5116) that would begin Washington’s transition to 100 percent clean energy by 2045. In the hearing — which required overflow seating in another Senate hearing room — Committee Chair Sen. Reuven Carlyle said he’s aiming to have a substitute bill introduced by next Tuesday, January 22. 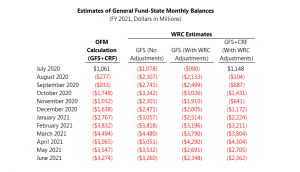 A cash deficit in the GFS is expected this month; could mean double-digit across-the-board cuts