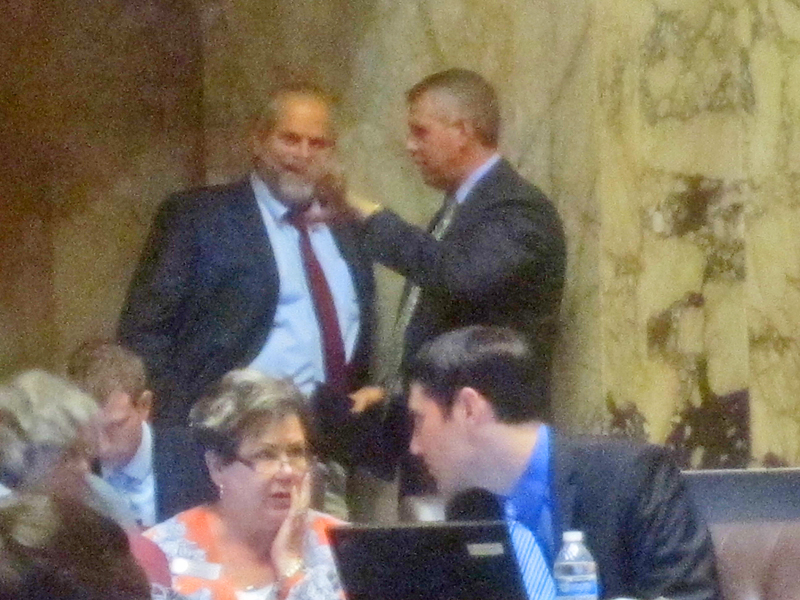 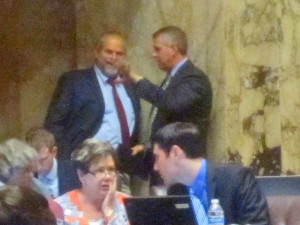 If you watched carefully during Tuesday’s action on the House floor and you knew something of the debate, you could see plenty of dickering on the fish-consumption issue. Here state Rep. Hans Dunshee, D-Snohomish, and former House Republican Leader Richard DeBolt confer in a corner of the House chamber.

OLYMPIA, June 26.—As that oh-so-close deal on a budget proves elusive in the Washington State Legislature, it is becoming clear that one of the big hangups is an issue that has run silent and run deep all session long – a state effort to rewrite water-quality rules that may impose a standard so stringent that it cannot be met.

The sticking point is a budget proviso advocated primarily by the Boeing Co. requiring a study of actual fish consumption by Washington residents – how much people really eat, who eats it, what type of fish, and where those fish are caught. The million-dollar University of Washington study, proposed by the Senate version of the budget, gets at a central question in a debate that has raged in environmental policy circles for more than two years: How clean do the state’s waterways really need to be? The kicker comes in a single sentence on page 87 of the Senate budget bill: It says the study “shall be used” in rulemaking activity as the state considers new clean-water standards.

Lawmakers say the study is one of the big issues that stands in the way of a session-ending budget deal. Some lawmakers say the study is the price the Senate demanded in return for accepting a telecom tax measure that would generate $85 million for the state. Judging by all the frantic negotiating that could be seen in the wings and corners of the House chamber late Tuesday afternoon, key legislators and the governor’s office are scrambling to reach an agreement. The big hitch is that the study might take a year or more to finish, yet there is pressure to get the new rules in place by 2014 – meaning that rules could be adopted before the study is complete. 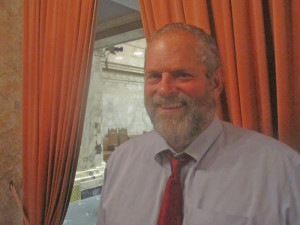 “The tribes are saying our people have waited around long enough,” says state Rep. Hans Dunshee, D-Snohomish, House Democrats’ point-man on the issue. “They’re saying our people are eating this fish poison, there are studies showing that their fish-consumption level is much higher than the state level, so it is time to move forward on that.”

There’s nothing fishy about this issue – it is one that has enormous implications for business and local governments, both of which need discharge permits for industrial activities and wastewater treatment plants. Water-quality standards are based on an estimate of human fish consumption, and there is general agreement that the current estimates are too low – a maximum 3.5 pounds a month. Over the last two years the state has been considering adopting a much higher estimate – perhaps as high as 17.6 pounds a month. No state uses an estimate that high – Oregon is currently the highest at 12 pounds a month. The big worry is that the higher fish-consumption estimate will force the state to adopt water-quality standards so stringent that they cannot be met with current technology, already a half-billion-dollar problem for the pulp industry alone in the Beaver State. Indeed, it appears that the fish consumption estimate would prompt the state to impose standards for discharges that are cleaner than the water into which the discharges flow.

It is the kind of debate that so far has attracted little attention beyond Olympia policy circles, but which among the cognoscenti has brought talk of Armageddon. The hue and cry from business and local governments last year prompted the Gregoire Administration to delay its rush to adopt a new fish-consumption standard by the end of 2012. But the rulemaking continues on both fish consumption and water quality, and the Department of Ecology hopes to have a draft rule in place by early 2014, with final adoption by the end of the year.

The thing is, skeptics say, how can you adopt stringent new rules for water quality – especially ones that will cost plenty and may do no good – if you don’t have good data in hand about fish consumption? Most arguments center on tribal fish consumption – presumably Indians are the biggest fish-eaters – but studies don’t indicate whether the fish come from Washington waters. For all anyone knows, a big percentage might be caught elsewhere. Gorton’s fish sticks, anyone? 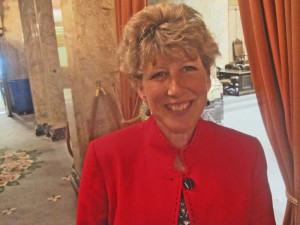 Those who were present in the House Tuesday afternoon for the lengthy debate over amendments to a transportation tax package might have witnessed a flurry of activity on the issue, as lawmakers and officials of the governor’s office huddled in the wings for intent conversation. Among the participants was Ted Sturdevant, legislative liaison for Gov. Jay Inslee, who under the Gregoire Administration was the Ecology director who spearheaded the fish-consumption and water-quality rulemaking effort.

Lawmakers said the governor’s office offered a proposal Tuesday afternoon that would allow the rulemaking effort to proceed while the study is taking place. It would require the Department of Ecology to consider a number of factors in its rulemaking and report back to the Legislature in 2014. The University of Washington study, meanwhile, would not be complete until 2015.

It’s not the best solution, admits Shelly Short, R-Addy, who is working the issue for House Republicans with former Minority Leader Richard DeBolt, R-Chehalis. What happens if the study shows the water-quality rules will have little or no impact on toxins consumed by fish-eaters? “There is a problem, but candidly we don’t hold all the cards,” she said. The big problem is that the tribes may demand action by the federal Environmental Protection Agency, and the feds might seek to impose higher water quality standards themselves.

So the issue right now is how the new study might be accommodated in the rulemaking process. “We can’t solve this whole thing with a budget proviso,” Short said. “It will be something we will be watching for a long time.” 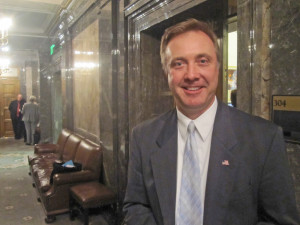 Lawmakers say the pressure for the budget proviso comes from the Boeing Co., which was among the interests that lobbied heavily last year for the delay on the fish-consumption standard. It should be observed that Boeing is not the only player on the issue – the Northwest Pulp and Paper Association, the Association of Washington Business and city and county and port-district lobbying organizations also are involved. But those groups have not been pushing for the budget language and instead have put their emphasis on a roundtable negotiating effort in the governor’s office. Sen. Doug Ericksen, R-Ferndale, chairman of the Senate Energy, Environment and Telecommunications Committee, said the resistance to the budget proviso is perplexing – it is weak to begin with, and the proposed language from the governor’s office waters it down. “It is Boeing’s Number One issue,” he said. “The Boeing Co. shouldn’t have to fight this hard to create jobs in the state of Washington.”

The battle of the budget proviso is really just a small skirmish in a fight that will play out over the next year and a half, said Chris McCabe of the Northwest Pulp and Paper Association. The Department of Ecology held back on new standards for Washington while Oregon implemented its own stringent requirements, and by replicating the Oregon process it risks creating exactly the same problems in this state. “You create a water quality standard that is so stringent nobody can meet it, not private folks like our members, or public folks like local governments and ports. And that is not a good outcome, because it creates uncertainty about your ability to get your discharge permit renewed. It opens the door to a lot of litigation and lawsuits, and it really creates an unpredictable business climate in this state.