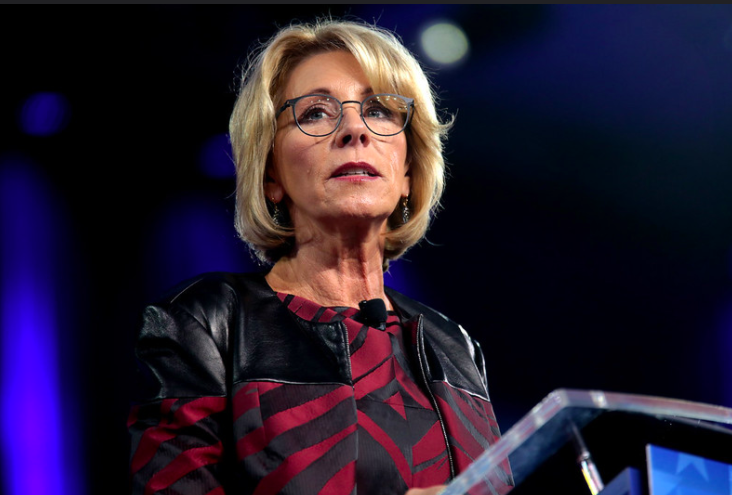 The revised guidelines were brought forward by DeVos essentially to shore up due process rights for those accused of sexual misconduct.

The new guidelines, set to go into effect on August 14, would redefine sexual misconduct covered by Title IX as actions that are “severe, pervasive and objectively offensive.” Under the Obama Administration regulations, reports of sexual misconduct only needed to allege one of those characteristics.

Title IX, a 1972 law, prohibits gender discrimination (including sexual assault) at schools. Schools that fail to adhere to Title IX requirements are subject to penalties that include having federal funding slashed.

The DeVos rule would also prohibit universities from investigating campus sexual assaults that occur at off-campus housing or study abroad programs and would allow campus investigations to include live hearings and cross-examinations of complainants.

Ferguson asserts the department’s new rule, published on May 19, will chill reporting of sexual harassment and assault.

On the legal basis undergirding the Attorneys General lawsuit, Ferguson said the Department of Education’s rule violates the Federal Administrative Procedure Act because it “exceeds the department’s statutory authority, is arbitrary and capricious, and was adopted without proper procedures.”

It’s hard enough for sexual assault survivors to come forward — why is the Trump Administration making it even more difficult?” Ferguson said. “Title IX is intended to ensure everyone has access to education free from harassment, violence and discrimination. This rule undermines that purpose.”

In addition to the attorneys general suit, the ACLU filed a federal lawsuit in May on behalf of four advocacy groups for victims of sexual assault. That suit also asserts that the updated definition of sexual misconduct imposes a heavier burden of proof which might dissuade victims from coming forward.

This new federal effort to weaken Title IX makes it more difficult for victims of sexual harassment or sexual assault to continue their educations and needlessly comes amid a global pandemic,” said the ACLU suit.

The attorneys general suit zeroes in on the point that victims of sexual assault or harassment are less likely to continue their education due to the sometimes arduous process of reporting misconduct.

One analysis of the impact of sexual and physical/verbal violence on the academic performance of college students found that 34 percent of survivors drop out of college.

Responding to the attorneys general suit, Department of Education spokesperson Angela Morabito said the guidelines require colleges to execute “a reliable, transparent, and fair process in handling complaints of sexual misconduct,” and that the states complaint is a “political press release masquerading as a lawsuit.”

“Due process rights are survivors’ rights — everyone deserves to be treated fairly, and that’s what our rule requires,” Morabito continued.