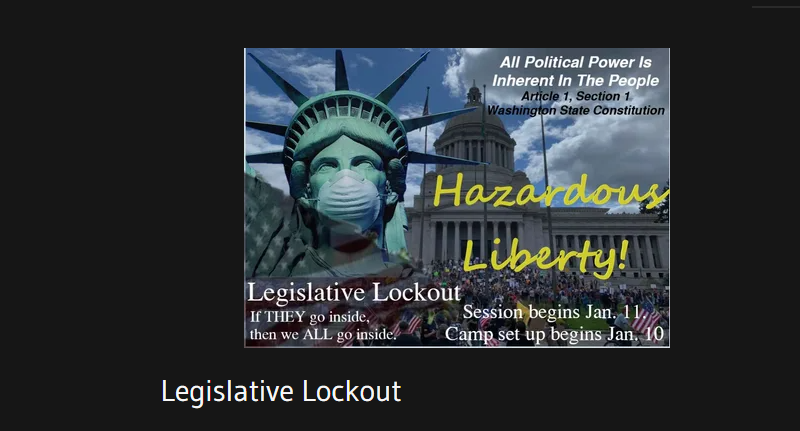 A far-right group based in Washington State has announced plans to occupy Capitol facilities at the upcoming legislative session, which is scheduled to begin on January 11th.

In an email to supporters, Matt Marshall, founder of the Washington State Three Percenters, outlined the group’s plan to “station themselves” at the capitol in a “Legislative Lockout.” The group will also attempt to enter the State House of Representatives and State Senate in violation of rules implemented by the Legislature.

Unless and until the Governor and Legislative Leadership agree to restore full public access to the Legislative buildings, including the chambers of the House and Senate, and including in-person public hearings on all proposed legislation, the Citizens of the State shall station themselves at all entrances to the main Legislative Building (commonly called the Capitol) of the State of Washington,” wrote Marshall.

The House plans to hold the entire session remotely following opening day while the Senate will execute a hybrid format. Capitol facilities are set to remain closed to the public and guests, who will be able participate in hearings virtually.

The current plan of the Governor and Legislative Leadership for the upcoming legislative session manifestly violates Article 2, Section 11 of the Washington State Constitution. Under Article 1, Sections 1, 4, 24, and 29, and by Natural Law, it is our Right and our Duty to prevent these Officers of the State from doing so,” continued Marshall.

In order to implement the new rules, members of both chambers will be present on the first day of the legislative session in order to establish an in-person quorum to vote on rules changes.

In addition to legislators, a limited number of capitol staffers and members of the Capitol Press Corps will be permitted to enter the House and Senate buildings. For every person that enters, Marshall said members of his group will attempt to enter with them and “occupy the gallery areas in each chamber.”

The goal driving these plans is to make the legislative session as uncomfortable as possible until in-person access to the buildings is restored, wrote Marshall.

Marshall says that the group does not plan on taking “violent offensive action of any kind”, but that they would “be prepared to defend ourselves while demanding the State follow the Constitution.”

On a Facebook page for the “Legislative Lockout,” 62 people currently say they are going and 322 say they are interested.

The Washington State Three Percenters have been responsible for several rallies this year in violation of state public health orders.

Members of the Washington State Three Percenters have previously called former State Rep. Matt Shea, who according to a State House report participated in domestic terrorism against the United States, a “hero.”

The group formed as an offshoot of the paramilitary national Three Percenters organization, though they claim to have severed ties with the organization in 2019.