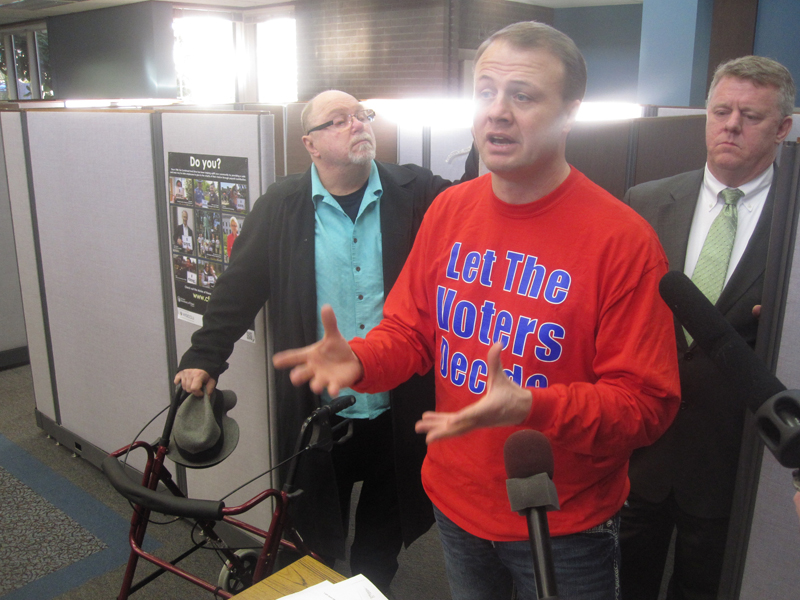 I-517 Extends Deadlines, Establishes Right to Gather Signatures at Stores, Stadiums, Public Buildings – Lawmakers May be Asked to Place Alternative Measure on Ballot 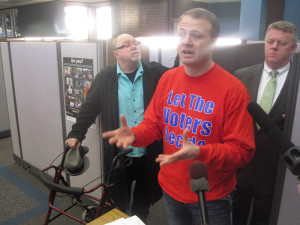 OLYMPIA, Jan. 8.—Now that Tim Eyman and his allies have turned in signatures for Initiative 517, the so-called “initiative on initiatives,” long-simmering resentments about ballot-measure campaigns in this state seem to be coming to a boil. But this time the grumbling isn’t limited to the progressive camp. It’s also coming from some of the business interests that have benefited from the campaigns managed by the state’s leading initiative promoter, which in recent years have made it virtually impossible for the Legislature to raise taxes.

The measure aims to make it easier for initiatives to qualify for the ballot, by extending the deadlines under which signature-gathering campaigns operate. But what has retailers seething is the fact that it also establishes the right for canvassers to collect signatures at supermarkets and big-box stores – now a matter of choice for property owners. The complaints to be heard at the statehouse raise the possibility that the Legislature may be asked to step in and offer an alternative measure for the ballot this November.

First things first, of course – the measure still has to qualify. State elections officials are counting signatures. But certification appears a slam-dunk. Eyman’s team turned in 345,000 signatures last week, well in excess of the 241,000 required for a place on the ballot. Because the measure has been filed as an initiative to Legislature, lawmakers next session will have a chance next session to enact the measure into law, thus keeping the measure from appearing on the ballot.

Not that it is likely to happen, given lawmakers’ distaste for Eyman’s anti-tax measures. But the idea of a legislative alternative seems to be making the rounds at the Capitol right now. Key business players, speaking on background with Washington State Wire, say they are furious about the way this one played out. 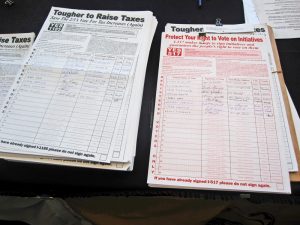 Initiative 517 was circulated alongside I-1185 last year, the business-supported measure that reimposed the two-thirds-for-taxes requirement.

Jan Teague, director of the Washington Retail Association, is one of the few speaking publicly. At this point she says her group hasn’t taken a position, though she says she was “pretty irritated about the whole thing” when she learned that Eyman was piggybacking on I-1185. Like many business trade associations, her group backed 1185, one of a series of Eyman measures that have essentially taken tax increases off the table by requiring a two-thirds vote of the House and Senate. The measures, wildly popular with voters, have blocked tax hikes that otherwise almost certainly would have been passed by lawmakers during the nastiest of recessions. The last two campaigns have largely been financed by business interests – $1.4 million the last time around.

Signature gatherers carried petitions for I-517 at the same time they collected signatures for I-1185.

Exactly what will happen next session is anyone’s guess. Teague says the association isn’t planning an alternative right now. But she says her group is concerned about the impact the measure will have on retailers’ property rights. “I think we have a few miles to go before this all kind of settles out,” she said. “But we are very anxious about this. We already get complaints about the signature gatherers and they can get pretty aggressive.”

For his part, Eyman points out that 1185 wasn’t the only campaign that boosted signature-gathering efforts for 517. The petitions were carried by canvassers for all of last year’s paid signature drives. It’s a matter of protecting their business, he says – and of making sure initiative campaigns aren’t curtailed.

Burr Under the Saddle 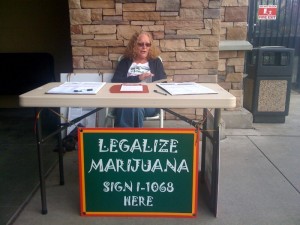 Signature gatherer at a table outside the Lacey Wal-Mart in 2011: Currently a matter of store discretion.

The initiative process is under constant attack, Eyman says, from the state’s lawmakers and the special interests that support them. His heyday as the state’s most successful initiative promoter has come during a period of Democratic-Party dominance of the statehouse, and most of his ballot measures have taken a populist anti-tax tilt. But certainly there have been other measures of a more liberal nature, several backed by labor unions. While Washington has never been hamstrung by initiatives California-style, and never can be, because voters here cannot directly amend the state constitution, frustration is rampant in the Legislature. Every session lawmakers consider bills that attempt to place new restrictions on the process – regulating signature gatherers, requiring criminal background checks, limiting paid signature drives.

Meanwhile, the signature gathering process has become big business for Eyman and others. The signature threshold keeps rising because it is tied to a percentage of the vote in the last presidential election. It has been more than a dozen years since an all-volunteer campaign succeeded, Eyman notes – that was his car-tab rollback in 1999. Nowadays it can take deep pockets to get a measure on the ballot, especially if a measure is filed at the last minute. Reports from the field indicated that last year’s successful charter-schools campaign, which did the trick in just three weeks at a cost of $3 million, had to pay a whopping $5 a signature.

Eyman says a central problem is that the law limits the amount of time during which signatures can be collected – roughly ten months for initiatives to the Legislature and six months for initiatives to the people, which proceed directly to the ballot. By extending deadlines by six months, he says it is more likely that volunteer campaigns will be able to collect the needed signatures. “It’s not like there’s going to be a radical huge increase in the number of initiatives that are going to qualify for the ballot,” he says. “I think you will have more grassroots groups trying to do it. The big corporations, the big unions – this isn’t going to have any impact on them whatever; they are going to use the process as they already have. But if we have a year to collect this very huge number of signatures, we think grass-roots groups ought to be part of this process and have access to it.”

At the same time, the measure bars harassment of signature gatherers, setting a 25-foot zone around canvassers where pushing, shoving, yelling, screaming and spitting is forbidden. 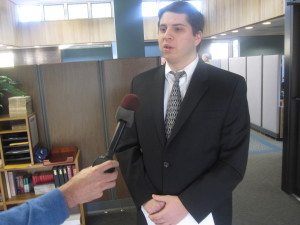 There’s a bit of economic self-interest behind the campaign, of course – signature drives could be run year-round, meaning plenty of business for canvassing firms. And clearly political self-interest drives some of the opposition. Longtime Eyman foe Andrew Villenueve, director of the one-man Northwest Progressive Institute, has announced the creation of an opposition campaign calling itself “Stop Tim Eyman’s Profit Machine.” He’s never seen an Eyman initiative he likes, he says.

But what irks retailers isn’t a matter of politics. The initiative would dramatically expand the rights of signature gatherers to canvass at store entrances and in certain public venues. Right now signature gatherers are guaranteed the right to canvass at the entrances to shopping malls, under a 1981 state Supreme Court ruling, Alderwood Associates v. Washington Environmental Council. The court held that shopping malls are like a town square where people are encouraged to congregate and linger. But the entrances to individual stores are a different matter. A 1999 case, Waremart v. Progressive Campaigns, established that stores must allow signature gathering only if they allow other groups to solicit at their entrances.

In other words, if the Boy Scouts can sell popcorn and the Salvation Army can ring the bell, the signature gatherers must be allowed as well. Big-box retailers and supermarkets, the most desirable locations, can establish rules of conduct and designate specific times when signature gathering is allowed – though many contend their rules are disregarded, and that they have to deal with complaints from customers who maintain they have been harassed.

I-517 declares that signature gathering is a “legally protected activity on public sidewalks and walkways and all walkways that carry pedestrian traffic, including those in front of the entrances and exits to any store.” It also would allow signature gathering inside and outside of public buildings, including public sports stadiums, convention and exhibition centers and public fairs. Meaning that if you go see the Mariners or do the Puyallup, you’ll find a whole lot of gathering going on.

Attorney Shawn Newman, a sometime Eyman ally who serves as the Washington state director of the Initiative and Referendum Institute, affiliated with the University of Southern California School of Law, says signature gathering deserves special protection. Newman, who did not participate in the drafting of the initiative, says the initiative really doesn’t establish a new right – that already exists. But it affirms that political speech is the most protected form of speech in a democracy. “It has been well established that when you are are exercising the initiative power, you are at the front of the line, and you have superior rights over those selling Girl Scout cookies or engaging in another activity.”

Newman says signature gatherers ought to be allowed to gather signatures in any public setting, as long as they aren’t disruptive. If anything, he says the measure will take pressure off retailers, by allowing signatures to be gathered in public buildings and in taxpayer-financed venues like fairgrounds and stadiums. Some cities, like Auburn, impose an outright ban on signature gathering on municipal property. If the public pays for the buildings, he asks, why shouldn’t the public be allowed to gather signatures there? “I think it gets back to the openness of the process,” he says. “We face the crunch of trying to get it done in six months, often at the worst time possible, and it typically forces people to petition at those big-box stores.”

It’s a mistake to say it’s all Eyman’s doing. He got support for the modest $300,000 drive from Citizens in Charge, a Woodbridge, Virginia organization that promotes the initiative process. Another key player is “Eddie Spaghetti” Agazarm, the now-retired partner in Citizen Solutions, the signature gathering firm that has worked most Eyman campaigns. Last year he says he was “yelling and screaming at people to carry the f—— petitions, or else I was going to run them over in my wheelchair and my walker.”

Where retailers complain about unruly signature gatherers, Agazarm says people who try to interfere with signature gathering are just as disruptive. And he points to documentation of organized interference going back nearly 20 years, to the dawn of modern paid signature campaigns in this state. Things have gotten worse as politics have become more polarized, Agazarm says.  He and his crews have been shouted at, spit on and kicked out of places where he says they ought to be allowed. I-517 “clarifies that we can petition, just leave us alone. I can understand if we’re disturbing the peace or shooting heroin while we are petitioning. But if we aren’t committing crimes, why bother us?”