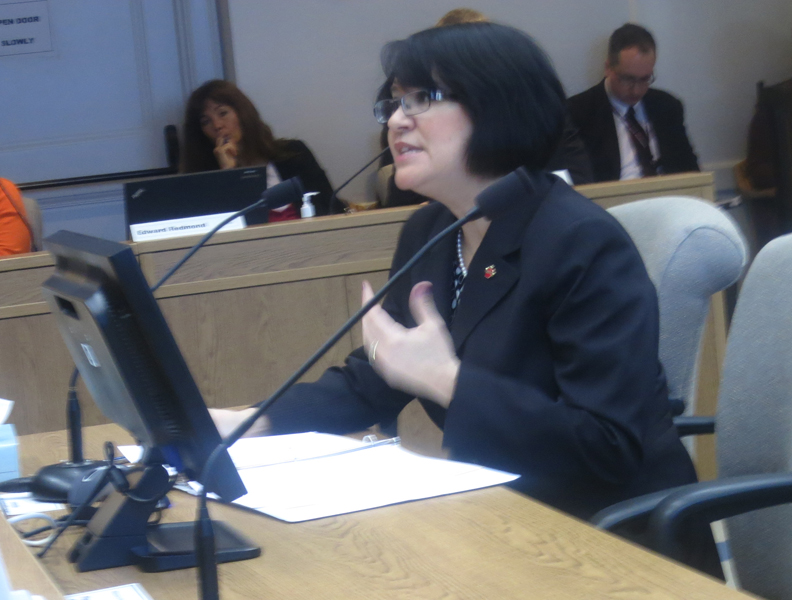 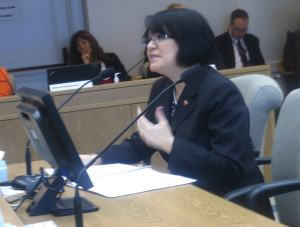 OLYMPIA, Jan. 21.—The state Department of Ecology sure seems to be getting the third degree from the Senate this year. As the 2014 session opens, a series of hearings in the Legislature’s upper chamber have put the agency in the spotlight – and there isn’t a lot of warmth involved.

First lawmakers called director Maia Bellon on the carpet, to explain the agency’s plan to write an environmental impact statement for a coal export terminal near Bellingham that seemingly lumps in the the sun, the moon and the stars. Suspicious folk think the agency might be stacking the deck against the project. Then came a hearing on the new water-quality rules Ecology is expected to adopt sometime this spring. Those rules are likely to be so stringent no technology is available to meet them; industry and local-government associations say they will cost billions. Next up, the growing fear from some quarters that the agency will impose low-carbon fuel standards without asking the Legislature, adding a buck or so to the price of a gallon of gas – that’s on the agenda for Thursday.

So maybe all the hearings are natural, when you consider how many far-reaching initiatives are under way out in Lacey at Ecology headquarters. State Sen. Doug Ericksen, R-Ferndale, chairman of the Senate Energy, Environment and Telecommunications Committee says part of the idea is that lawmakers might be able to “apply pressure to change the direction things are going.”

But what also makes the hearings a natural thing is that they may be the only thing lawmakers can do. The agency doesn’t need legislative action for the coal-port issue or the water-quality standards, and it can act as it chooses. And while some question its ability to enact low-carbon fuel standards without a vote of the Legislature, the agency says it has authority there as well, under the state Clean Air Act. Bills to rein in the agency probably wouldn’t get very far. Any legislation would have to pass a Democrat-controlled House and then get past Democratic Gov. Jay Inslee, who may be Ecology’s biggest fan.

All of which explains why, for those paying attention, the Ecology hearings have been as dramatic as the ones on all those other issues that get all the headlines. It’s just that marijuana and abortion draw standing-room-only crowds. Department of Ecology authority? You can show up late. Odds are you’ll find a seat.

Sitting in for Inslee 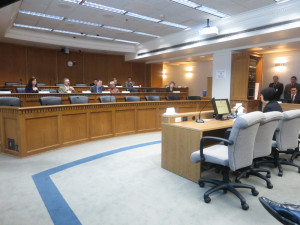 Bellon gets a grilling during a joint hearing of the Senate Energy, Environment and Telecommunications Committee and the Senate Trade and Economic Development Committee.

Take last week’s hearing on the coal-port environmental impact statement. In its analysis of the proposed Gateway Pacific Terminal at Cherry Point near Bellingham, Ecology is drawing in topics that ordinarily would be beyond the pale – the impact of coal-burning on the other side of the world, train traffic between the Midwest and the Pacific, shipping traffic in the Pacific.

Bellon said the state is justified in going beyond the ordinary because coal is involved. “Washington state is essentially being asked to consider an energy pipeline of sorts, where the end use of the product could generate more greenhouse gas production than all other sources in the state of Washington combined,” Bellon said. “…This project proposes to be the nation’s largest coal export facility and would increase North America’s total coal exports by about 40 percent.”

The disturbing thing here, skeptical lawmakers said, isn’t so much the state’s position on coal but rather the fact that the Department of Ecology is using an environmental impact statement – ostensibly a rigorous and fair-minded review process — to defeat a project it apparently opposes, even though it hasn’t quite come out and said so. It was the first time Ecology has been summoned to answer tough questions about its tactics, and whether Bellon succeeded or failed depended on the beholder. Ericksen was unimpressed; ranking Democrat Kevin Ranker, D-Orcas Island, said he thought she made a good account of it. The key thing is that Bellon speaks for Inslee, who himself has not expressed a direct opinion on the scoping decision, but whose opinions on coal, climate change and environmental issues are well-known. As governor, Inslee controls the decision-making process at Ecology and other executive agencies.

Under questioning from skeptical lawmakers, Bellon was forced to admit that the review is unlike anything that has come before. Although the State Environmental Policy Act allows a “lead agency” to consider issues beyond its borders, it is the first time the state has served as a lead agency and considered issues beyond the state line. The state will consider impacts of train transport of coal from the Midwest and the impact of shipping on the Pacific, not to mention the impact of coal-burning on the other side of the world. One interesting tidbit emerged from Bellon’s testimony: Ecology has made much of the fact that it receieved 125,000 public comments on the coal proposal, an unusually high number, and the responses were unusually weighted toward Ecology’s position favoring an expansive scoping review. But during the hearing, Bellon observed that 14,000 are what the agency considers “unique responses.” In other words, some 111,000 were generated by computer, or were form letters, or were otherwise sent with a mere keystroke or checkbox worth of effort.

Exactly how the state plans to evaluate coal emissions has not been decided, Bellon said, but Ecology’s silence has left many wondering whether the evaluation will be fair. If Washington state says no and China gets coal anyway from other sources, the potential C02 pollution from Washington exports has no impact – it is what high school debaters might call a “non-unique disadvantage.” But if it is considered in isolation, C02 pollution might appear a unique disadvantage and therefore it might give regulators a reason to say no. “Some experts have stated that the facility has the potential to increase the world market for coal and lead to much greater coal use and greater greenhouse emissions than would occur without the facility,” Bellon said. “Others vehemently disagree.”

Ericksen, in whose district the port would be located, calls the lack of a decision on this point intellectually dishonest and says it ought to be taken as a warning sign. The very fact that Ecology is considering things on what it calls a “case by case” basis demonstrates that it is picking and choosing criteria with an outcome in mind. “The Department of Ecology is saying they can apply different standards to different corporations based on political pressure,” he says. “That is a terrible way to run a state. It is more like running a Third World dictatorship, to apply different standards based upon how an individual feeds about a particular industry.”

Asked Sen. Jim Honeyford, R-Sunnyside, “So are you setting up the Department of Ecology as the world’s greenhouse-gas police?”

Also for the first time at a legislative hearing, third parties were asked to weigh in on the EIS issue. Ryan Mello, a Tacoma city councilman, said he was glad to see the state Department of Ecology consider the broader impacts of the project. Of particular concern to cities is the impact of additional train traffic along the coal-shipping corridors, he said. But Jerry O’Keefe of the Washington State Public Ports Association said there is something a bit screwy about it all. Imagine if someone was trying to develop a shopping center, and regulators decided they had to consider the impact of all the trucks carrying goods across the country? It’s the sort of thing that might make anyone think twice about a major infrastructure development project. And think of the message to other countries. “It sounds a bit arrogant to say to people, you know, you really ought to not use coal,” he said. “In the United States we produce one heck of a lot of greenhouse gases, and so the ramifications of those kinds of messages with our trade partners, I don’t think are well understood by the Department of Ecology, and should be very well considered in the Gov.’s office before decisions like this are made.”

Meanwhile, in a different hearing last week, third parties were asked for the first time to offer their views on the water-quality issue. Known around the statehouse as the “fish consumption” issue, because it hinges on a dramatic increase in an estimate of how much fish Washington residents eat, the increased water-quality standards could drive a 25-fold increase in the requirements for cleanliness Ecology requires for discharges into lakes and streams. Trouble is, in many cases, the technology doesn’t exist to get water that clean, and pollution levels that low can’t even be measured. In many cases it means discharges would have to be cleaner than the body of water into which they go. And the rule affects more than just those factories and sewer plants that discharge directly into the water — it also affects anyone with a building or parking lot large enough to require a discharge permit for stormwater runoff. In those cases, property owners would be required to clean up rainwater cleaner than when it hits the ground. Driving its effort, Ecology says, is a preference – not a requirement – from regional officials of the Environmental Protection Agency that Washington increase its standards. Third-party environmental groups have taken the arugment further in court, asking that the EPA be compelled to order higher standards in Washington.

Officials of city, county and business organizations presented a study they released last month indicating that the typical wastewater treatment plant with a 5 million gallon daily capability, big enough to serve 50,000 people, would face additional costs ranging from $75 million to $388 million, depending on whether a new plant would have to be built. Still its output would not meet the new standards. Estimates from local government groups are dire. The city of Bellingham has estimated sewer bills might increase more than $200 a month.  Carl Schroeder of the Association of Washington Cities said that if wastewater treatment plants on Puget Sound installed the best available technology to remove PCBs, the cost would be $7.4 billion. Yet it would only remove 6 percent of contaminants over 25 years because PCBs find their way into the water supply by other means.

“This is not an issue that is going to go away, and we are going to continue to do work on it on the legislative front,” Ericksen said. “Bankruptcy is not an option for our cities, and $200-a-month fees for sewer facilities are not going to work in Bellingham, Washntucna or Spokane.”