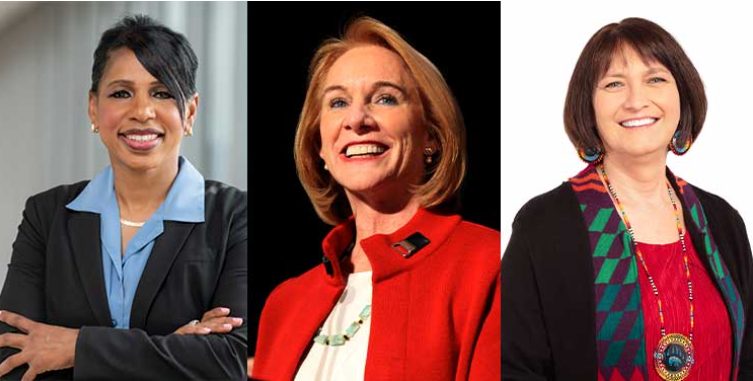 Durkan, Best and Juneau discuss the ups and downs of serving as women in public leadership

Moderated by journalist Joni Balter and Dr. Larry Hubbell, longtime former director at Seattle University’s Institute of Public Service, Durkan, Best, and Juneau considered the preparation it takes to rise up into a vital leadership position.

To open the discussion, Balter raised the question “What happens next? After the election, does being a woman carry additional burdens in your job?”

Durkan, the second female mayor of Seattle, was the first to respond and said, “It absolutely affects us-it is impossible not to. Gender discrimination is alive and well in every piece of business, government, and society. That is the expectation that everyone brings to ‘what is a leader’. Women have to be strong, but also able to show emotion. Collaborative, but also decisive. “

Superintendent Juneau chimed in and mentioned that “Women are still fighting a pay gap. Expectation gaps, scrutiny gaps and support gaps. Many Superintendents are male created —by and for men-and the types of leadership they bring to these jobs. The support we receive is not as present as it should be.”

Out of all of the Fortune 500 company CEOs, only 37 are women,” said Best. “We know we have a lot of work to do on this front. We reach out, speak out and talk about the challenges so that those that come after us are better supported.”

Balter then posed another question about what role the media plays in covering women in leadership. She reminded the group that back in October 2020 protestors marched to both Mayor Durkan and Seattle City Councilmember Debora Juarez’s homes and spray-painted what some say were blatant hate messages.

Durkan responded with “Many council members knew about what happened, but the Media chose not to cover it. I think there are a lot of reasons, but whatever that reason is, it allows for the dehumanization of people and allows that type of conduct to continue. These are bad and corrosive things for a political environment. If we can’t come together in this, we won’t be able to come together in the tough things we need to do in this city and country in the future.”

Though the conversation seemed to mostly steer clear of COVID-19, Balter asked Chief Best, about a Harvard Business Review article which said that countries with women in leadership positions have suffered six times fewer COVID-19 deaths than countries led by men.

You have to acknowledge the thoughtful women in leadership and their approaches in making sure we have safety and are taking care of our next and future generations,” said Best. “Women tend to lead much more heavily toward the empathic role in terms of making sure people are taken care of then what we’ve seen with others. Women are compassionate and willing to listen and move forward.”

Durkan added, “Even in our own region, we were the first in and there was no guidebook. There were conference calls with the County executives of Pierce, Snohomish, and King and I was so glad to have my two sister mayors there with me! Even though we were first, we have the lowest incidence of disease and hospitalizations. This happened because of a strong collaborative process, and it helped having the three women mayors in the room.”

The discussion also included pieces of advice for young women who desire to hold high level public servant positions. Many of the responses spoke to the importance of a strong support system and all three women agreed that being authentic is of the utmost importance for success, but that being authentic and fitting in isn’t always easy. Best said, “When people understand when you operate with integrity and hold to your values, you end up being a much better leader. You don’t always fit in. That’s not leadership. Look at the vision and look forward.”

Best was asked by a student in the audience what future public servants can do to create a more humane and unbiased public safety system. The student asked, “How can we reimagine the Seattle police system to regain trust in the communities they’ve hurt?”

In Seattle there’s been a lot of work done in reform efforts and building policies and procedures, and training that helps bolster the credibility of the organization. Even with all that, we still have issues. How we make things better is through real and honest dialogue. It’s important that we bolster the areas we struggle-mental health and addiction. We struggle with public safety on a holistic scale. Coming together and having those conversations and allowing people to see that the needle is moving forward will be incredibly helpful. There has been a lot of movement, but there needs to be more,” responded Best.