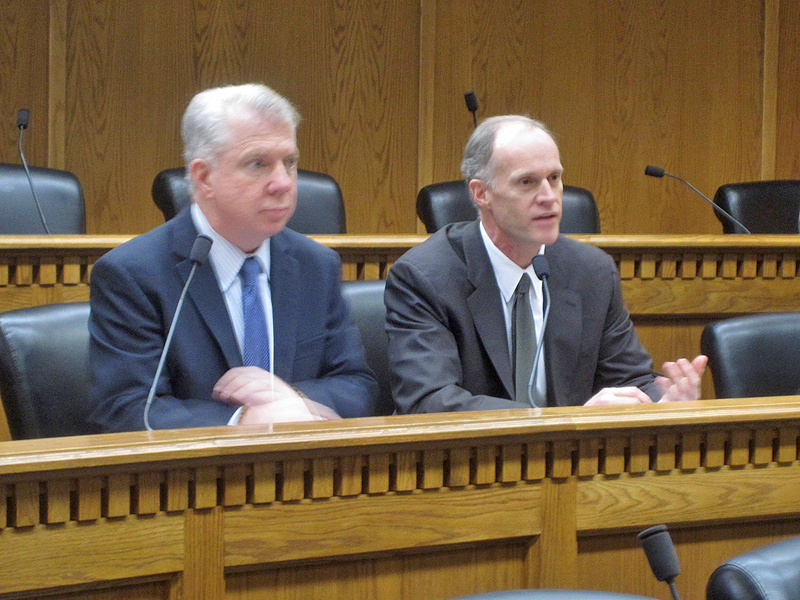 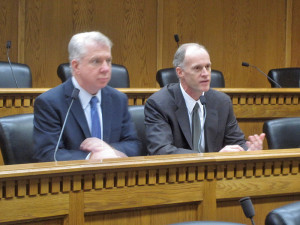 OLYMPIA, Jan. 10.—Senate Democrats as a whole have finally said no to a power-sharing offer from a new governing coalition that will boot them out of power Monday in the Legislature’s upper chamber – but the offer of committee chairmanships remains open, and it appears it’s every Democrat for him or herself.

And so the organization of the state Senate, normally one of the dullest and driest affairs of the Legislature’s opening day, has become the stuff of high drama. Now individual Democratic senators must decide whether they will accept gavels from the new Majority Coalition Caucus. Insiders say the new coalition majority, comprised of 23 Republicans and two Democrats, has sent a letter to potential takers asking them to make up their minds by 3 p.m. Friday.

News that the Senate Democratic Caucus won’t reach for the olive branch came Thursday morning at the annual legislative preview sponsored by the Associated Press – a rather important feature of the Legislature’s schedule, where announcements are made and leaders face the press. Senate Democratic Leader Ed Murray, D-Seattle, declared a united caucus has decided it would be better off in the minority than in cooperating with those who have usurped its power. Democrats have met behind closed doors twice since the beginning of the year to decide whether they will accept the coalition’s offer – and the fact that it has taken them a full month to reach this point demonstrates the deep divisions in the Democratic caucus room.

Even with the Senate Democrats sitting things out, Democrats will still have a significant voice at the statehouse, as the party will have a solid majority in the House of Representatives and will hold the governor’s mansion, where Gov.-elect Jay Inslee will be moving in next week. By choosing full minority status in the Senate, the Dems will be relegated to the role of complainants for the 2013 session, and will allow the House Democrats to carry the ball.

The situation occurs despite the fact that Democrats have a numerical majority in the Senate, 26 to 23. Control will shift with the opening vote in the Senate Monday because state Sens. Rodney Tom, D-Bellevue, and Tim Sheldon, D-Potlatch, have joined with Republicans to form the coalition. They say they hope to steer the Senate toward more sustainable budget decisions that will give the emphasis to K-12, higher education and creation of a business-friendly environment – and avoid talk of tax increases. Tom and Sheldon turned the Senate upside down last March when they voted for a largely Republican-authored budget, and they say a formal coalition avoids surprises from the start.

Reasons offered by Murray for rejecting the bipartisan power-sharing offer were largely technical and procedural in nature. But with his word choice Murray’s meaning was clear. “The difference between the two parties – and I will use the term parties – is significant,” he said.

As he said it, Murray was seated next to Sen. Tom, his fellow Democrat who will assume the majority leader duties on opening day. He stopped just short of saying Tom had become a Republican.

Murray said the opposing “party” will have so great a majority on the Rules Committee that “the opportunity for us to move a Democratic bill out of Rules would be pretty hard. So that was our reasoning.”

His team had countered the offer by suggesting co-chairmen for every committee except Rules – an arrangement Murray himself called “a mess” when it was used in the state House from 1999 to 2001 as a result of a 49-49 tie.

Murray said the 24 Democrats on his team are willing to sign a letter declaring that they will not join with the majority coalition. But he conceded some individual Democrats may well take the deal.

Tom said the majority coalition is doing plenty of bending, and he hopes there will be at least some across-the-aisle cooperation in the coming session. “I keep getting calls from different members saying yes, they would like to be chairs. I do want to continue to have that option open. We think it is important to make this work and to have that bipartisan approach the public is expecting of us.

“They want us to govern. They are tired of us always being in this political mode, where it is always about politics in the next election.”

“There are some great opportunities there for us to come together, and we’re not doing this for window-dressing. We really want to make sure that we are approaching this from a bipartisan approach, so that we can have a vibrant dialogue and maybe a somewhat different flavor than what you might see in the House.”

Who Wants a Committee?

So now every Senate Democrat faces a decision – anybody want a committee? The six that are being offered in whole to the Democrats are not the all-powerful budget committees, to be sure. But each one serves an influential constituency. They are Natural Resources and Parks, Agriculture and Water, Trade and Economic Development, Financial Institutions and Insurance, Environment and Marine Waters, and Higher Education.

Also up for grabs are three co-chairmanships, on Transportation, Human Services and Energy.

Much speculation has centered on those Democrats who under ordinary circumstances might be in line for those chairmanships. Among them are Brian Hatfield, D-Raymond, and Steve Hobbs, D-Lake Stevens, who under Democratic control of the Senate have served as chairmen of the agriculture and financial institutions committees. Others include state Sen. Kevin Ranker, D-Orcas Island, chairman of the Senate environment panel, and a host of Democrats who had been slated to move into new chairmanship positions before the coalition emerged last month.