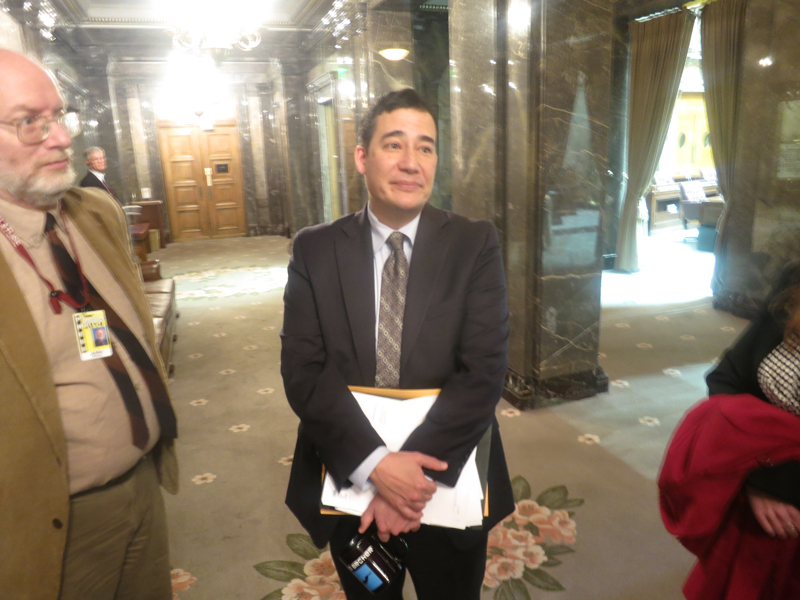 With Two Members Out, Majority Coalition Caucus Puts Off Vote 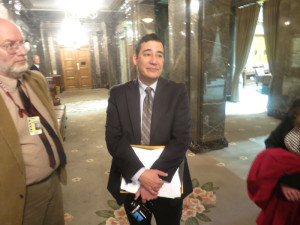 OLYMPIA, Jan. 22.—Democrat Steve Hobbs has survived another day as full chairman of the state Senate’s Financial Institutions, Housing and Insurance Committee, due to the absence of two members on the Senate floor Wednesday.

But it appears that a showdown may be coming, perhaps next week, when a full Senate floor session is expected. During this early stage of the 2014 legislative session, full floor sessions are rare and “pro forma” sessions involving just a few members are the norm. Watch for a resolution next week.

“I am hoping this will all be worked out,” said Hobbs, who says he hopes to retain the full chairmanship. Leaders of the Senate Majority Coalition Caucus say there is significant support among their ranks to change the committee leadership to a co-chairmanship, with Hobbs as the Democratic co-chair and newly elected Sen. Jan Angel as the Republican leader. The change would essentially give each chairman veto power over the other’s actions, a structure that already exists on the Senate Transportation Committee.

Hobbs was chairman of the committee under Democratic control of the Senate, and he retained his gavel when power shifted in December 2012. The Senate now is under the control of a Majority Coalition, currently with 24 Republican members and two Democrats. Hobbs did not change teams in 2012, but the moderate Democrat – a self-described “Roadkiller” – says he is unafraid to take a position somewhere in the middle. Like Sen. Brian Hatfield, R-Raymond, chairman of the Senate Agriculture Committee, and Sen. Tracey Eide, D-Des Moines, co-chair of the Transportation panel, Hobbs accepted the coalition’s offer to share some of its power. The Senate Democratic Caucus, as a whole, did not, but agreed not to shun members who participated.

Exactly which members of the Majority Coalition were out Tuesday – and therefore saved Hobbs for now – was unclear. Because there was no action on the floor, there were none of the usual motions to excuse members who are absent.But the absence of two members is enough to decide things. The coalition right now has only 26 of the chamber’s 49 members.

But Senate Majority Coalition leaders say a vote is coming, because the balance of the Senate has changed somewhat with the election last November of Republican Jan Angel, R-Port Orchard. Angel has a background in the same area and members have concluded that she would make a fine addition to the committee leadership team, said Senate Republican Leader Mark Schoesler, R-Ritzville. “I think they have examined her life history and real world experience in banking, real estate, housing commissions, and finance. And they see that she has a lot of assets that she would bring to the committee.”

With such a small change, and yet such a big one, the true impact appears to be in the symbolism of the move. Does it mean a lessened emphasis on bipartisanship? Hobbs says he suspect a floor fight he waged just after this session opened might have had something to do with it. He protested the referral of a bill revising the state Landlord-Tenant Act to the Senate Judiciary Committee. He lost that battle. But when you think about it, he says there are battles over bill referrals all the time.

“They’ve known Angel won the election since November, and they referred to me as chair at the beginning of the session. Now, to make the decision to possible change that direction – I hope cooler heads will prevail, and they will back off from this.

“It is like, what did I do wrong? Did I do something wrong? Again, we don’t know.”