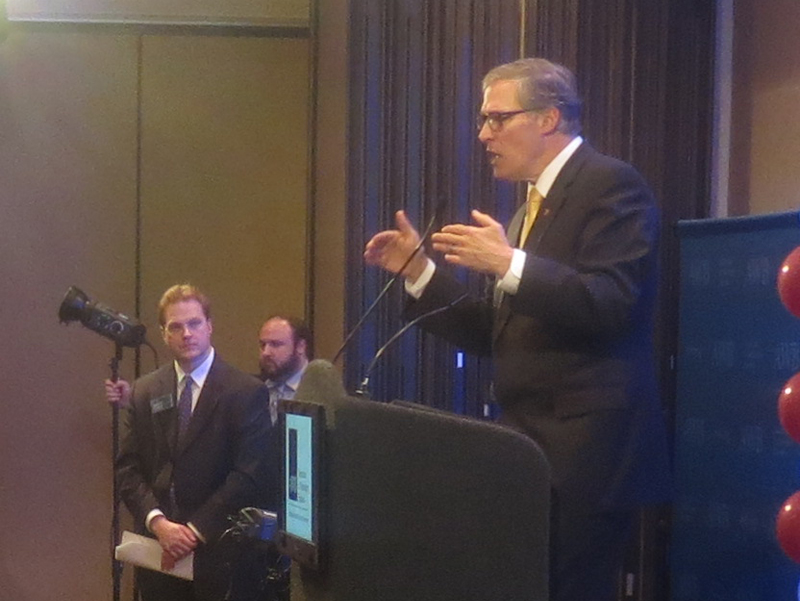 Deathly Quiet as Governor Addresses AWB, and Then Come the Groans 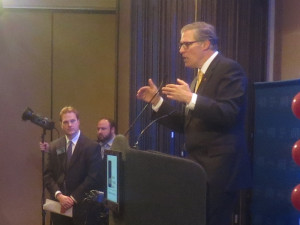 Gov. Jay Inslee gets a chilly reception at the annual legislative summit of the Association of Washington Business. New AWB president Kris Johnson looks on.

OLYMPIA, Feb. 7.—A hush fell over the room Thursday as Gov. Jay Inslee described his plan to raise the state minimum wage – and then came the groans.

Which probably tells you what business thinks of the idea. At the annual legislative summit of the Association of Washington Business in Olympia Thursday, there was no point in running an applause-meter, because there wasn’t any.

Silence reigned as the governor spoke. Then an irate restaurateur from Pullman asked the governor what he planned to do to prevent border-community customers from heading across the line to Idaho for lower prices. The governor’s answer touched off a wave of grumbling across the room so loud that Inslee was forced to stop.

“If you guys will allow me –,” he began. “I know AWB is a respectful organization, so let me give you my position on this.”

The scene probably was a better temperature-taking than any poll of business owners. It was as if the thermostat in the ballroom of the Red Lion Hotel had suddenly been dialed down 20 degrees. In a state that already has the highest minimum wage in the country, $9.32 an hour, the governor said a business case could be made for a dramatic increase. The crowded room of businessmen and women – the ones who would be signing the paychecks — was having none of it. During sessions that took place earlier in the day, as lawmakers described progressive-themed proposals in the House for new mandates on business, for wages, paid sick leave and paid vacation leave, applause came mainly when Republican critics said business owners are right to be very, very worried.

Responding to calls from labor organizations and progressive interest groups, the governor and House Democrats are pushing proposals that would dramatically increase the state minimum wage. A bill that would boost the wage to $12 an hour is on its way to the House floor, though it is unclear whether there are enough votes within the House Democratic caucus for the measure to win passage in that chamber. The governor is just a little shy of that mark, urging an increase of from $1.50 to $2.50 an hour.

At the statehouse, the proposals are being pushed as an effort to reduce poverty, albeit one that business and perhaps consumers might pay for. In his remarks to AWB, the governor offered a nod to the theme that is energizing progressive ranks these days – a crusade to reduce “income inequality.” But then he laid out a more business-oriented pitch. He said that if business is required to pay more, then customers would have more money to spend.

Inslee said the fastest-growing segment of the economy – low-wage service jobs – simply don’t pay enough to drive economic growth. “We have a consumer crisis here, of not having people in a position to help our economy grow,” he said. “Now, this consumer crisis has different language, depending on who you talk to. Some people talk about this from an income inequality standpoint. Some people talk about this as a lack of social mobility. I think this room can think of it appropriately as a consumer crisis, and we are just not producing enough people who can afford to grow our economy.”

But the business crowd wasn’t thinking at the 12,000-foot level. Tanya Neilsen, owner of Thrive Community Fitness in Maple Valley, said the state’s fast-rising minimum wage, indexed to inflation in the Seattle market as a result of a 1998 initiative, has forced her to trim the number of low-wage workers she hires. “I employ fewer entry-level workers than I did four years ago, and that is unfortunate,” she said.

If Washington has the highest minimum wage in the country, another asked, shouldn’t that mean it has the lowest poverty rate? And the room grew deathly quiet as JoReen Brinkman, owner of Subway restaurants in Whitman County, said she and other merchants in the greater Pullman area are going to have to raise their prices to cover higher costs – driving trade to Moscow, where the Idaho minimum wage is $7.25 an hour. “You’re going to say, no, they won’t drive that far for food, but they’re going to be over there getting their groceries, they’re going to be over there getting all their goods, because I’ve got to increase my costs to cover an increase in the minimum wage. So my consumers are going to drive 15 minutes away. What are you going to do for businesses in Spokane, Pullman, Clarkston, and all those border towns?”

Inslee’s response? “I’m going to give you better consumers who have a living wage.”

The sound of grumbling filled the room.

Inslee went on to argue that the current minimum wage – if it is the sole source of support for a sole breadwinner in a household – leaves recipients below the poverty level. Critics have countered that few minimum-wage earners are the sole sources of income for their households. Inslee cited a letter signed by seven Nobel laureates and released by the Economic Policy Institute in Washington, D.C., a liberal think tank, which argued that a reasonable increase in the minimum wage does not lead to fewer jobs. The letter, however, endorses a national increase to $10.10 an hour.

“You know who agrees with me?” Inslee asked. “Seven Nobel Prize winners. I only majored in economics at the UW. I don’t claim to be an economist, but I do believe that there is a reason to embrace the concept that you shouldn’t live in poverty when you’re at the minimum wage in Washington.” 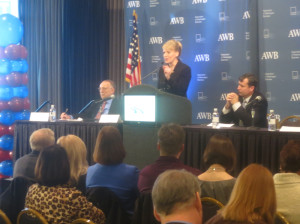 At this point it is hard to predict whether there will be enough support for a minimum wage increase for House Democratic leaders to stage a vote on the House floor. Their measure, HB 2672, won easy passage in the House Labor and Workforce Development Committee Wednesday, but just 32 Democrats have signed onto the measure, and it takes 50 votes for any bill to pass the House. A mandatory paid sick leave bill, however, has already cleared that chamber. A mandatory paid-vacation leave bill got a hearing in the House but it appears to have died for lack of a committee vote. Comments from legislative Republicans at the AWB conference would lead one to believe that progressive proposals for new mandates on business are likely to be stopped dead in the Senate.

“There’s this idea that you can increase the standard of living by moving existing dollars around the table,” said state Rep. Matt Manweller, R-Ellensburg, a professor of political science at Central Washington University. “So what you see is a variety of proposals, to increase the minimum wage, to establish paid vacation, to establish paid sick leave and safe leave. …On the other side, there is the argument, let us build a bigger pie.”

State Sen. Janea Holmquist Newbry, R-Moses Lake, chairwoman of the Senate Commerce and Labor Committee, said she is willing to give bills a hearing if they reach the Senate, but a vote is unlikely.

“I think there’s a good intention if we’re going to try to help those in poverty, that is great,” she said. “But the leading major driver of poverty is that people don’t have jobs at all. So again, we need to be doing what we can to reduce the cost of business so we can create those jobs. Simply increasing the minimum wage or creating paid sick leave is not going to create one additional job – it is actually going to increase your cost of doing business.”