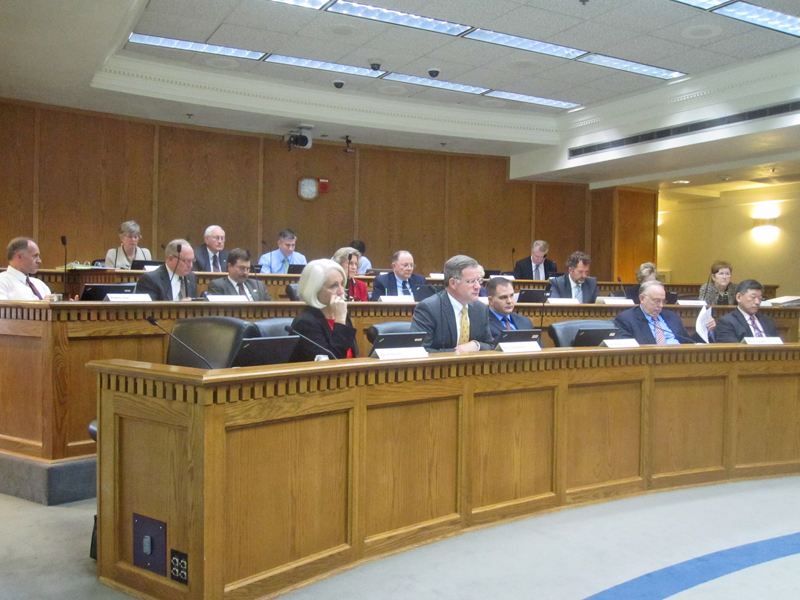 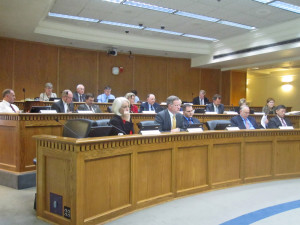 OLYMPIA, June 1.—A Senate panel voted out its own version of an estate-tax bill Friday and launched what is beginning to look like a multi-million dollar game of chicken with the House — the first sign of drama in this year’s slow-starting special session.

If lawmakers don’t correct a legal goof in the next few days, the Department of Revenue will begin sending out refund checks totaling $40 million to $60 million to the estates of some of the richest dead people in the state, or rather their estates, heirs and lawyers.

But while Democrats in the state House passed a bill Thursday to make the fix, on a largely party-line 51-40 vote, a measure that emerged Friday from the Senate Ways and Means Committee makes it clear that the other team wants to bargain. The Senate bill would make the same short-term correction. But in return, the Republican-leaning Senate Majority Coalition wants long-term reductions in the estate tax – cutting it by 25 percent.

Now the question is whether either side will blink. Said Senate Republican Leader Mark Schoesler, R-Ritzville, “A deal can come together within moments when all the parties are willing to do so.” But the clock is ticking. The Department of Revenue says that a series of superior-court rulings force it to begin issuing checks next week. And once that happens, there’s no getting the money back.

The standoff is prompted by a state Supreme Court decision last fall that held the state made a technical error when it passed an estate-tax bill in 2005. Washington collects taxes from estates worth more than $2 million, roughly 300 of them a year, and deposits the money in the state’s Education Legacy Trust Fund for the support of public schools. But because that 2005 Washington law failed to properly reference federal statutes, the court, in what is known as the Bracken decision, said the state cannot collect taxes from the estates of married couples that use a common estate-planning technique to defer taxes until the surviving spouse dies.

In a direct sense the ruling affects only two estates and forces a refund of just $6 million. But there are many others that are affected, and even though they didn’t risk legal fees by joining the lawsuit, they now are clamoring for refunds. The 70-odd refund requests received so far total $40 million to $60 million, and sccording to the Department of Revenue, the state’s total liability could run as high as $138 million. If taxes expected over the next two years are counted, the state has a total $160 million at stake.

Though lawmakers have been aware of the situation since the start of this year’s legislative session and some sort of a deal to fix the estate tax was expected before the final adjournment, what has brought the issue to a head is a series of Superior Court decisions since March ordering the state to begin issuing refunds. Spokesman Mike Gowrylow said attorneys representing nine estates have obtained court orders in Clark, King, Kitsap and Thurston counties; most but not all ordered the department to issue refunds. After the most recent adverse ruling, in Thurston County on May 17, the state attorney general’s office advised that the department could wait no longer. On Monday the department will begin processing checks, Gowrylow said.

The real deadline comes sometime later in the week, when the checks start going out in the mail. The sense in the statehouse is that lawmakers have until Wednesday. And they have another tiny bit of wiggle room, in that the checks won’t all go out at once. Gowrylow said, “Once we start cutting checks and mailing them out, that is it, we don’t get that money back. But if the Legislature acts by next week, that would cancel the majority of them.” 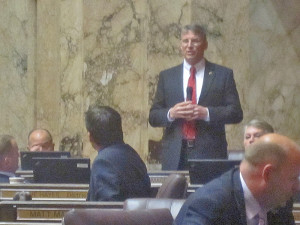 There is no doubt that the tax is politically popular. Back in 2006 opponents tried to repeal it with an initiative, I-920, but the tax was supported by 62 percent of the people and won in all 39 counties. Nor is there any question about the intent. No one argues that lawmakers or the voters of Washington state aimed to exempt married couples from the estate tax, while leaving it in place for single and divorced people — which is the effect of the court ruling.

Yet the debate over a fix has been snarled amid traditional Republican opposition to “death taxes,” and the fact that a solution requires an after-the-fact rewrite of Washington tax law. House Bill 2064 would keep taxes in place for the estates that did not participate in the lawsuit. Though the retroactive rewrite is unusual, the same approach has been used in the past to address other adverse court rulings on tax law. Another big reason every Republican in the House voted against the tax Thursday was the fact that the Senate was about to take a different position: “We have a counter from the Senate right now that I think is a very good suggestion,” said state Rep. Chad Mangendanz, R-Issaquah.

The Senate approach, SB 5939, sponsored by Senate Ways and Means chair Andy Hill, R-Redmond, attempts to find a middle ground. Like the House bill, it makes a short-term fix by reimposing the estate tax on married couples retroactively. But in return, it ratchets down tax rates over nine years and increases the tax threshold to $5 million, in line with federal estate-tax law. Over the long haul it would reduce estate taxes by 25 percent.

Friday’s hearing before the Ways and Means Committee presented a rather odd spectacle. Not a single interest group spoke in support of the measure, nor did any lawmaker argue its case, not even Hill.  Presumably further explanation will take place on the Senate floor, if Senate leaders strike a deal with the House and the measure comes to a vote.

But because the bill aims for compromise on an issue where few interests see any reason to bargain, there are plenty of voices of dismay. State Sen. Jim Hargrove, D-Hoquiam, issued a news release saying he voted for the bill in committee in the interest of striking a deal, but he will not support the bill on final passage because of the long-term financial impact. “Given the urgency of the situation, I supported moving this vehicle along in the interest of immediate action and the hopes of working with the House and the governor to find a permanent fix,” he said.

Gov. Jay Inslee issued a statement denouncing the Senate approach. “Time is of the essence on this issue,” he said. “If the Legislature does not act, the Department of Revenue will have to begin processing refunds next week — potentially reducing the Education Legacy Trust Fund by $45 million. But I’m discouraged that a bill approved today by the Senate Ways and Means Committee would take us in the wrong direction. Under that bill, starting in 2015, the state tax on estates valued at over $2 million would be cut dramatically. We have a long-term commitment to education under the Supreme Court’s McCleary decision, but, on this piece of the puzzle, the Senate committee passed only a short-sighted fix.”

Gets it From All Sides 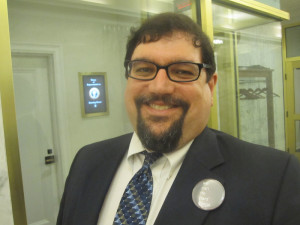 Did nothing to earn money: Nick Federici, spokesman for revenue coalition.

And testimony at Friday’s hearing on the bill indicated that there is unanimity of sorts among the all the affected interest groups – they hate it. Business groups including the Association of Washington Business and the National Federation of Independent Business maintain the state ought to ditch the tax entirely. “It represents double taxation,” said AWB’s Amber Carter. “It hurts family-held businesses that have already struggled as they are passed on to a second and third generation.” And Carter noted that Washington has one of the highest estate-tax rates in the nation, making Washington one of the worst states to die in, according to Forbes magazine – though it should be noted that Washington does not have an income tax and thus turns more heavily to other forms of taxation than other states.

On the other side, social-service and education interests argued that any reduction in the estate tax is a move in the wrong direction. Underlying the argument is another Supreme Court ruling, last year’s McCleary decision, which held that the state needs to spend billions more on K-12 education: The state, of course, needs to find the money. Nick Federici of the Our Economic Future Coalition – the umbrella “revenue coalition” – said the tax is paid by a relative handful of millionaires, and he offered a revealing detail about his own family background. Federici said he didn’t mind in the slightest when his businessman grandfather died and his estate was forced to pay taxes to the state. “I didn’t do anything to earn that,” Federici said. “He did all the hard work.”

Julie Murray of the Office of Financial Management tiptoed around the issue of long-term reductions in the estate tax, but called the Supreme Court ruling “absurd” and said lawmakers need to move quickly to make the Bracken fix. “We do believe an emergency exists. The courts have said essentially that time is up, and the Legislature needs to act. And so we are put in the position of either processing these refunds and potentially increasing the inequity that would exist, or decreasing it.”