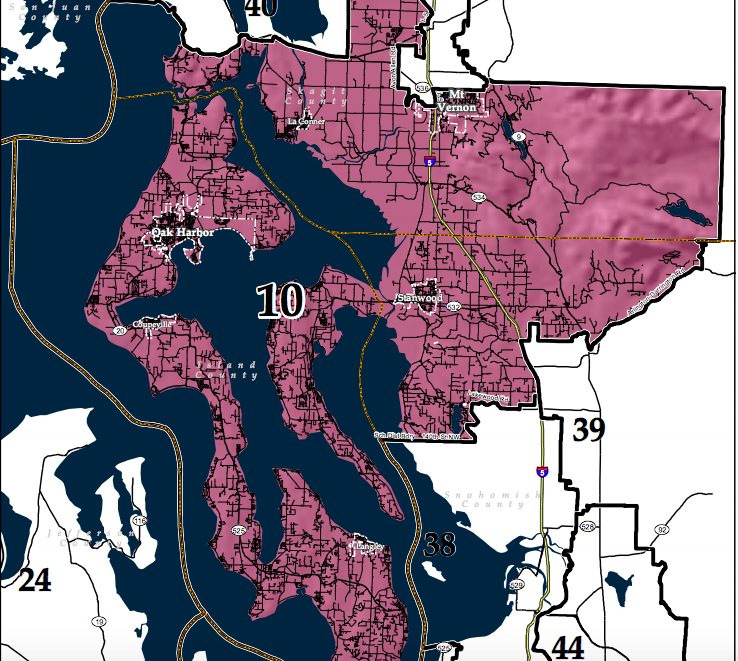 After competitive primaries for all three of its seats, Washington’s 10th Legislative District is proving to be one of the state’s most closely divided swing districts.

The district encompasses all of Island County, the northwestern tip of Snohomish, and the southwestern part of Skagit counties.

In the senate race, incumbent Republican Ron Muzzall is attempting to hold off a challenge from Democrat Hellen Price Johnson – an Island County Commissioner and former president of the Washington State Association of Counties.

Muzzall was appointed to the 10th LD senate seat last October to replace Barbara Bailey. A Whidbey Island farm owner and a former fire commissioner, Muzzall introduced legislation this past session to extend a farm internship program. The bill passed and was signed by Governor Inslee.

He is an Assistant Ranking Member on the State Government, Tribal Relations & Elections Committee and also serves on the Committees on Ways & Means and Health & Long Term Care.

Price Johnson is the Island County Commissioner for District One, which encompasses all of Whidbey Island south of the greater Oak Harbor area.

People in Island County care about smart land use planning and are fiercely protective of open space, shoreline access, and forest and ag. land zoning protections.”

Muzall and Price Johnson ran against each other alone in the primary. Price Johnson led after the first few ballot drops before Muzzall pulled ahead in the later rounds and finished with a little over 1000 more votes (32,022 – 30,943) after the final tally.

While Gilday finished the primary with over 12,000 (17%)  more votes than Homola, he was the lone Republican candidate in the race. The four Democrats in the primary combined for about 4,400 more votes than Gilday. Assuming Homola can consolidate Democratic support, a close general election contest looks imminent.

Elected to the Legislature in 2018, Paul was a prime sponsor on ten bills this past session. Serving on the College & Workforce Development, and the Education committees, his bills tackled issues like high poverty learning assistance and tuition waivers for children of veterans.

With only 1000 votes separating the two in the primary, another nail-biter appears to be taking shape. While Bruch had the slight edge in the final primary tally, Paul could close the gap with some of the 2,500 votes that were cast for Taylor Zimmermann of the “Progressive Party.”

In elections as close as those in the 10th LD, people with knowledge about the district say it’s important to run a race that displays an understanding of the way voter’s needs are impacted by geography.

Depending on where you are in the geography, some issues matter more than others. Skagit County is a very agricultural, natural resource based economy whereas Island County is more of a rural, Navy and retiree dominated area, depending on whether you are south or north,” said another Democratic PCO, who spoke to the Wire off the record. “So the 10th is sort of this inter-jurisdictional area that is hard to characterize in any one way. But I will say it’s a lot different than a lot of other places in that it’s a rural economy in Puget Sound and west of the mountains.”

As far as other specific issues, Bainbridge underscored that policies impacting the day-to-day lives of voters reign supreme:

Open and transparent government and the ability to participate and have a voice in public policy matter to Island County citizens. Job diversity and compatible jobs that enable the island’s beauty and rural character to remain vibrant are a huge priority. A healthy balance between a military presence, civilian jobs, property rights, and quality of life. Transportation funding that supports ferries; roundabouts, electric vehicle infrastructure, and bike lanes are considered crucial for the local economy and reducing carbon emissions.”

The general election will take place on November 3rd, but the counting of the mail-in ballots will continue past election night. Given the narrow margins that could be seen in each of the 10th LD races, it is likely that voters might have to sit tight for a period before they know who will be representing them in the Legislature next year.