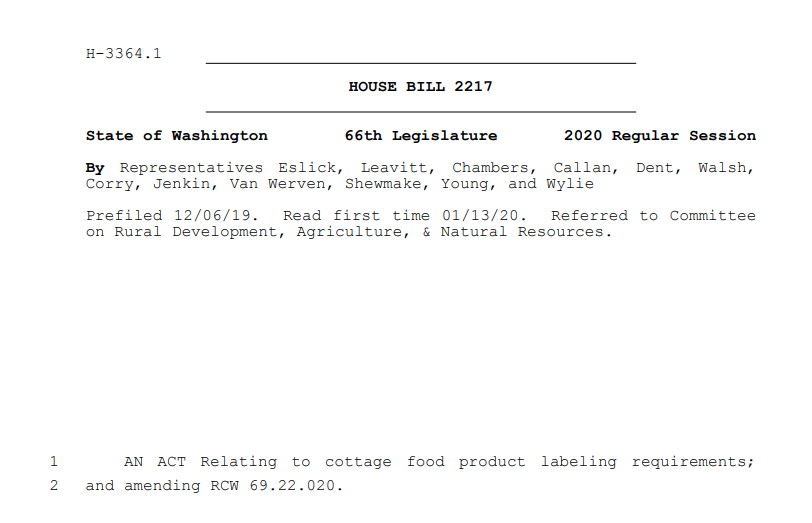 Cottage food producers, defined as producers of foods like jams, jellies, fruit butters, baked goods and preserves, would have to display their cottage food permit number on the label instead of the business’s address. That information would accompany currently-required information, including the name of the business, the food product’s name, the product’s ingredients, the net weight or volume of that product, allergen labeling, nutritional claims and a printed statement specifying the product was made in a home kitchen not subject to standard inspections.

The bill’s sponsor, Rep. Carolyn Eslick (R-39th District), believed the change was necessary because cottage food producers don’t want the address listed on the label — their home address — to be out in the public.

“Most of the entrepreneurs are young, stay-at-home moms with kids,” said Eslick during Friday’s meeting. “They are concerned, with their address on the label, that they will get unwanted people at their house.”

After consultations with the Department of Health and the Department of Agriculture, the solution to list the cottage business’s permit number in lieu of the address on the label was agreed upon, Eslick said during Friday’s meeting.

“I would appreciate helping these folks and getting this label changed for them,” Eslick said to the rest of the committee members.

Other stipulations of current state law, including a ban on cottage food producers selling their products online, through the mail or at a retailer out of state would not change under the bill.

The bill was the subject of a public hearing in the House of Representatives Rural Development, Agriculture and Natural Resources Committee meeting on Friday. Eslick was also the sponsor of another bill concerning the cottage food industry, House Bill 2218.