Representative Pramila Jayapal, along with the other co-chairs of the Congressional Progressive Caucus introduced a bold infrastructure proposal yesterday, entitled 21st Century New Deal for Jobs.

“Donald Trump’s cruel budget eliminates billions in funds that invest in our transportation, air quality and safety,” said Rep. Jayapal. “In stark contrast to Trump’s misguided values, we at the Congressional Progressive Caucus have prioritized infrastructure to ensure success for our communities. The 21st Century New Deal for Jobs plan will modernize and prepare workers for our changing economy. Day n and day out, our children, families and communities rely on safe school buildings, up-to-date transportation, secure roads and bridges and a steady paycheck. By upgrading our infrastructure, creating jobs and training workers for careers in clean energy, water and transportation, this New Deal will help our nation thrive.”

The proposal would invest $2 trillion over 10 years and would create 2.5 million new jobs in its first year. 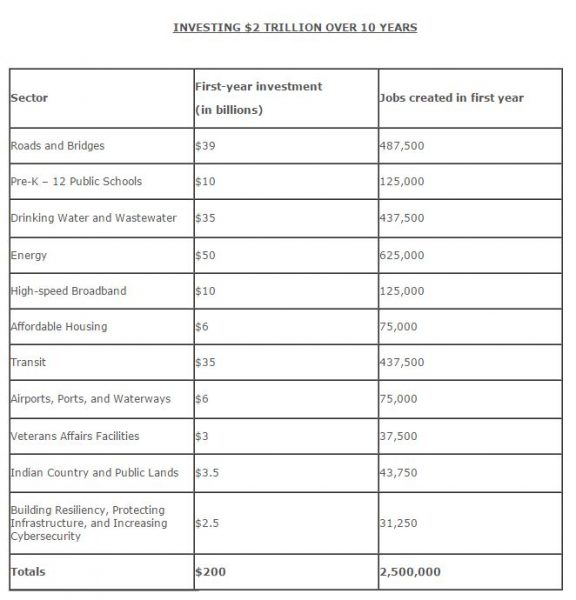 This plan comes shortly after a section of tunnel collapsed at the Hanford Nuclear Reservation in Benton County. President Trump’s budget proposal cuts about $120 million from Hanford’s budget, which currently exceeds $2 billion.

“These investments would create jobs and economic opportunity for our communities to thrive and for businesses to expand,” said Derek Stanford, State Representative (WA-01), “We need to build new classrooms — real classrooms to get students out of portables. We also need transportation projects, especially for the 405 corridor in Bothell, to ease congestion and give commuters options for getting to work.”

The Caucus also introduced a resolution that outlines ten principals that must be true of any job plan in order to pass into law. The resolution priorities public investment over privatization, racial and gender equity, environmental justice, clean energy, and tax equality.