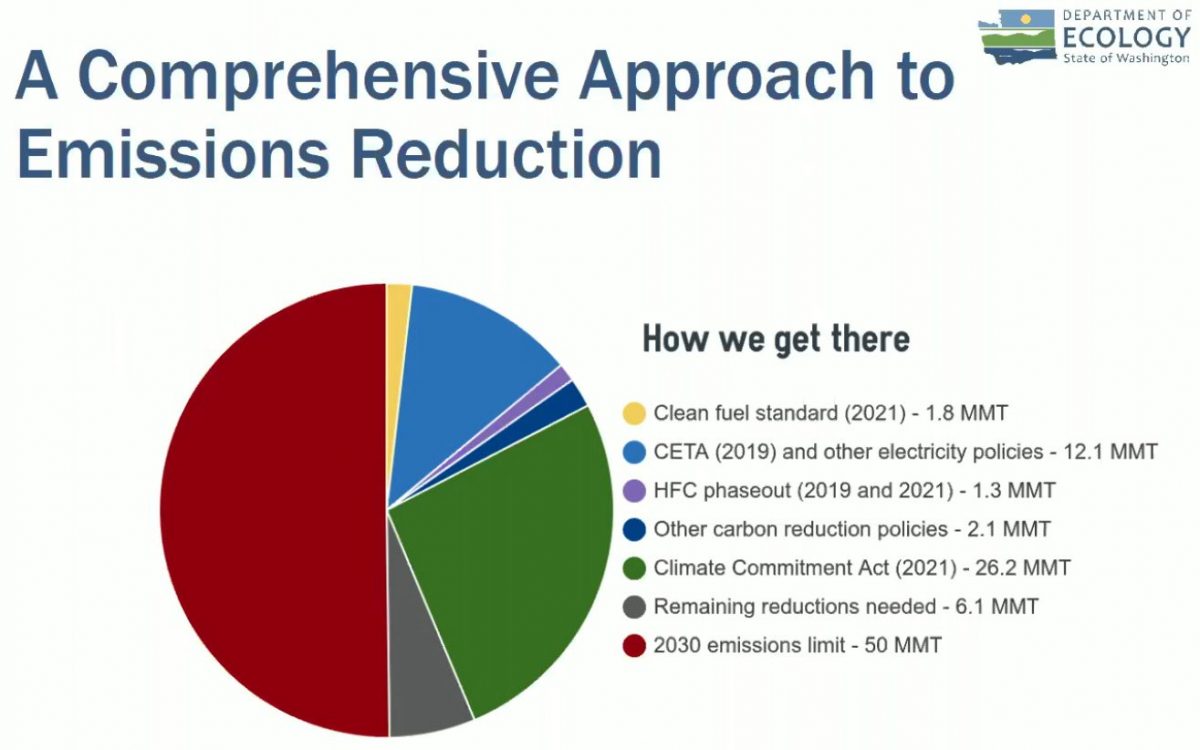 Following up on our story from yesterday on this week’s committee meetings, we’re bringing you information from two more sessions. Just this week there will be more than 40 committee meetings, but here at the Wire we’ve been watching as many as possible. In the coming days, we’ll be rolling out coverage of select committees discussing policy issues and topics that we’ve been keeping tabs on.

In this edition, we’ll be checking in on the Senate Environment, Energy and Technology Committee and the Senate Housing and Local Government Committee.

Over the past few years, Washington State has passed a number of climate bills designed to curtail emissions in the state. These include the Climate Commitment Act, the clean fuels standard, the HEAL Act, and cap-and-invest, which creates a carbon credit market.

At a Nov. 16 meeting, the Senate Environment, Energy and Technology Committee received an update on the program. To meet Washington’s climate goals, the state needs to cut its emissions in half by 2030, to roughly 50 million metric tons.

The following slide, presented during the meeting, outlines the role each of the policies will play in reaching that goal.

Luke Martland, the state Department of Ecology’s Climate Commitment Act implementation manager, said the act is crucial because it provides a blueprint to decarbonization.

The cap-and-invest program begins in 2023 and limits emission generation to 25,000 tons of CO2 a year by the state’s largest emitters. Some industries will receive temporary allowances, while other industries will need to purchase carbon credits if they plan on emitting more than the limit. The limit is designed to reduce over time.

Agriculture and forestry industries, as well as aviation and marine fuels, and small businesses are exempt from the emissions requirements. And there will be allowances provided to electricity and natural gas industries for free, as opposed to the transportation fuels industry which will have to buy allowances from the start.

The committee is chaired by Sen. Reuven Carlyle, who in recent coverage, said the legislature will be focusing on the implementation of the recently-passed legislation.

During the Nov. 16 meeting of the Senate Housing and Local Government Committee meeting, lawmakers heard presentations from policy experts from cities in other states, including Andrea Brennan, director of community planning and economic development for Minneapolis.

Minneapolis in recent years passed legislation eliminating exclusive single-family zoning. It’s something that Oregon has also enacted statewide. It’s also an idea that Washington lawmakers in the House have been talking about. Wednesday’s committee meeting highlights that lawmakers in the Senate are talking about it as well ahead of the 2022 session.

During the meeting, Sen. Shelly Short (R-7th LD) asked whether Minneapolis had run into sewer problems when planning for additional units and increasing density. Brennan said that when they analyzed sewer capacity, they found they could serve more people on existing infrastructure.

“This is where all of these pieces need to come together and they need to be thought of and planned for holistically,” Brennan said.

That includes planning for housing, jobs and services, and transportation and transit as a whole.

The committee also heard from LaDessa Croucher, director of the Dispute Resolution Center at volunteers of America Western Washington, about evictions.

In October, the Dispute Resolution Center received 1,846 notices for its eviction resolution pilot program, a 67% increase from August. They’re expecting more than 2,000 new referrals in November.

Croucher said in 93% of the cases, they have been able to reach an agreement between landlords and tenants. The total number of referrals statewide is 6,266 for the state’s Dispute Resolution Centers.

“I think we can expect this peak,” Croucher said. “We’ll report until we start to see a decrease.”

Croucher is expecting to see more challenges when rental assistance programs enacted during the pandemic begin running out.

The legislature passed HB 1277 last session, which added a $100 surcharge on each document recorded by county auditors, with some exceptions. A portion of these funds are dedicated to creating a steady source of income for rental assistance programs, but the law is tied up in the courts.