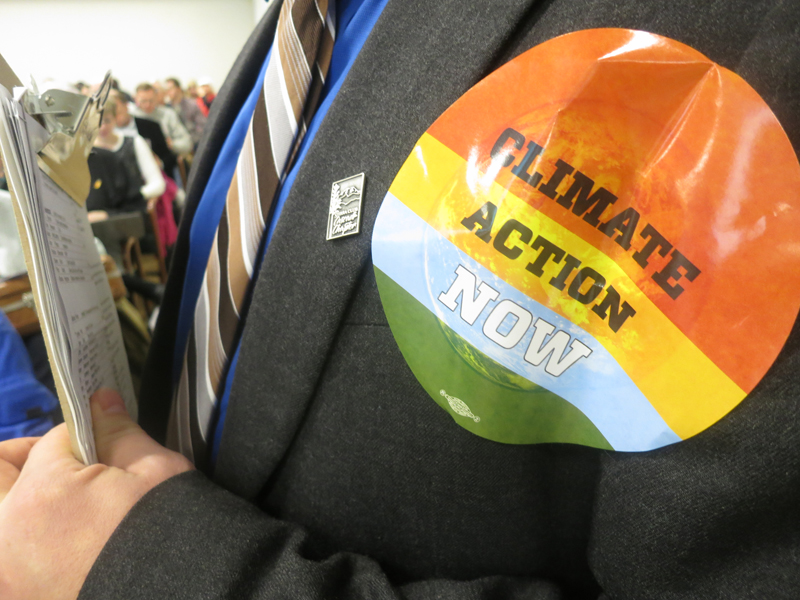 Gov. Jay lnslee’s carbon reductions task force delivered its final recommendations in a report issued Monday morning, but failed to say whether he should pursue a cap-and-trade program or a carbon tax for Washington state.

Either mechanism would establish a price on carbon, which emitters can put into the atmosphere for free currently, and force them to either pay to emit or reduce emissions. That was presented as an effective means of meeting the state’s obligation, under a 2008 law, to cut greenhouse gases over the next several decades.

The state isn’t meeting those long-term goals presently, according to consultants to a prior climate policy working group, and Inslee has been using this to step up pressure on state lawmakers to move forward with either a cap-and-trade program or a carbon tax.

The upshot of Monday’s report is that it essentially says either may work for Washington, under the right design considerations, with minimal economic harm or in some scenarios overall benefit.

Each has its benefits and drawbacks, and the task force is leaving it up to the Governor’s Office to decide which program is best to bring to the Legislature, which would ultimately have to pass it.

Inslee thanked the task force for their work during a hearing at Seattle City Hall Monday morning, saying the report spells out a call for action. Task force members spent six meetings going over research, as well as examining how a cap-and-trade program has worked in California compared to a carbon tax in British Columbia.

Inslee said at the hearing that more severe wildfires, risks of worsened flooding and more acidity in the ocean are problems the state needs to confront head-on through its climate policies.

“We need to increase our efforts, not decrease them,” Inslee said. “This problem has become much more acute, much more obvious. This should be a year for action. We are in a place where we can move forward as a state.”

HOW TO SPEND REVENUE?

Both a cap-and-trade program and a carbon tax target emissions but take divergent paths in doing so. The task force report said a carbon tax, or price-based approach, is simpler to implement because it requires setting a taxing rate on emissions and then lets emitters to decide whether to pay a higher price or cut emissions. But Inslee, in remarks earlier this month, pointed out that it’s tougher to achieve behavioral changes because some will simply accept the higher prices.

The cap-and-trade program, or emissions-based approach, is a more complex regulatory scheme, but offers more paths to compliance through buying and selling permits to emit, saving them for later use, or buying offset credits.

Under either system, revenue would be generated for the state. The report also leaves open the question of what to do with the money, although economic modeling done by the Office of Financial Management said the revenue should filtrate back into the broader economy to minimize overall impact.

As with any revenue source in Olympia, lawmakers on opposing ideological divides will look to fight over how to spend the money. Inslee has taken stances that some revenue could be used to address basic education funding, while other uses could include paying for flood protection projects and other means of adapting to severe weather from climate change.

The report could be an asset to Inslee as he makes his case for addressing carbon emissions, but it could also be greeted with skepticism in a Republican-controlled Senate.

The task force convened after Inslee issued an executive order this spring, and he selected who would be on it. It includes leading environmentalists and labor unions with strong Democratic Party ties in the state such as KC Golden of Climate Solutions, Jeff Johnson of the State Labor Council, AFL-CIO, Remy Trupin, executive director of the Budget & Policy Center, and Adam Glickman of the Service Employees International Union Health Care 775NW.

A similar working group last year but consisting of two lawmakers from either party plus Inslee couldn’t reach consensus on climate policy, dividing along party lines on a path for addressing the state’s carbon emissions.

A BUSINESS/GREEN SPLIT IN THE TASK FORCE

At the hearing, Inslee noted that all six of the task force meetings have been public hearings, and he believed it provided objective analysis of the programs. The task force included businesses and utilities such as Brad Tilden of the Alaska Air Group, Jay Gordon of the Washington State Dairy Federation, as well as Steve Wright of Chelan County Public Utility District and Kimberly Harris of Puget Sound Energy, and Mark Reddemann of Energy Northwest, which generates power for utilities.

Tilden submitted a dissenting voice to the need for a cap-and-trade program or a carbon tax. He wrote in comments included in the draft report that he didn’t feel the mechanisms would achieve the reductions necessary without requiring a steep price in carbon, which he felt would be regressive.

Energy Northwest opined that development of clean energy sources such as nuclear should be a pre-eminent focus of state policy toward combating climate change, and that the state should acknowledge hydropower and other carbon-free sources should be integral in future energy planning.

But those comments were balanced by voices from environmental groups, reflecting a broader divide in the task force’s membership.

“Our report is cautious and tentative, as any consensus document on this politically charged subject is apt to be,” wrote Golden in his comments. “But if our collective determination to move forward with a responsible climate policy is no stronger than the language in this report, then make your reservations for Toast.”

“There are others that just want to throw rocks and do nothing,” Inslee said. “Doing nothing is not an option. We ought to be leaders. We are leaders. Thankfully we are not alone.”

Sen. Doug Ericksen, R-Ferndale and chair of the Senate Energy Committee, has been an outspoken voice in opposing Inslee’s push in the Senate Republican Caucus, and said Monday that he wants to review the task force report, but doesn’t believe the governor had yet convinced him cap-and-trade or carbon taxes were the right solutions.

“I don’t see a piece of legislation in there yet,” Ericksen said. “The governor has a long way to go in making the argument.”

Ericksen also said he believed the task force had members that hew closely with the governor’s beliefs on climate policy, and the resulting report can be viewed in that light.

“Clearly it was one that close to his opinion,” Ericksen said. “It’s no surprise that they came forward with the proposal that they did.”

But, at this point, Ericksen said he wasn’t going to be close-minded to either a cap-and-trade or a carbon tax program.

“We’re not saying no to anything in the caucus,” Ericksen said. “I don’t want to get too far out pre-judging.”