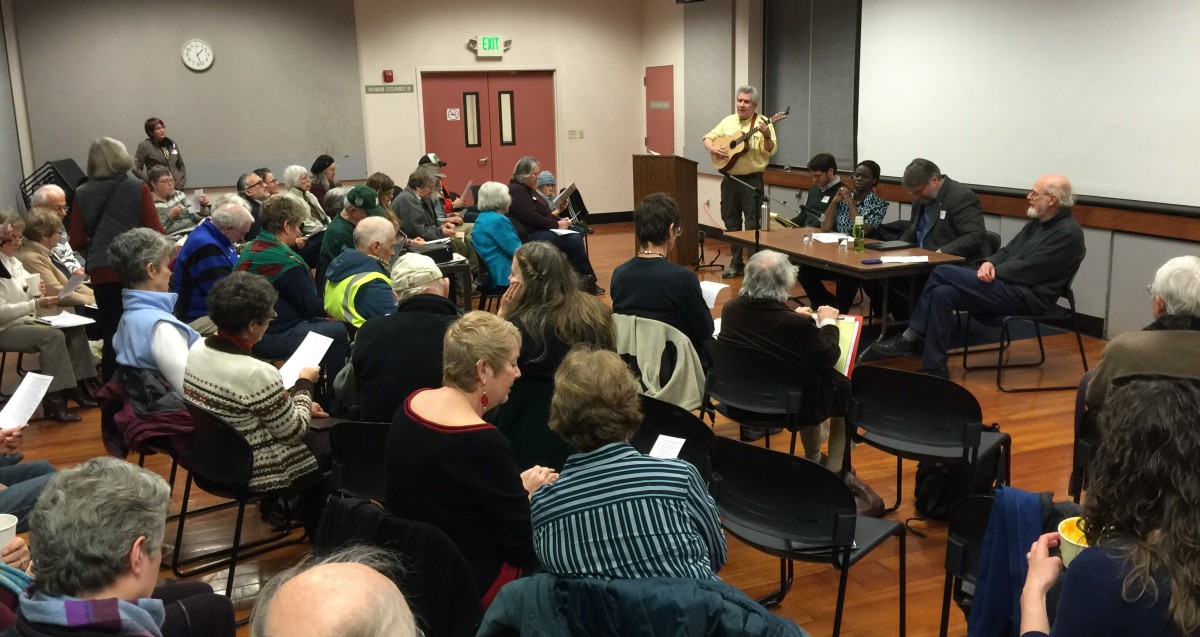 With only two months to go before initiative signature gatherers for one organization will be hitting the street, environmental groups are continuing to push their carbon reduction climate change agenda at local Climate Action Forums and Town Hall Meetings. On Saturday there were two forums, one in Seattle and one in Olympia.

The Olympia Forum at the Olympia Center featured six speakers from different organizations and sought to educate and mobilize supporters for both the Governor’s Carbon Pollution Accountability Act, House Bill 1314, and Carbon Washington’s Revenue-Neutral Carbon Tax.

Tiffany McGuyer the field manager for Washington Environmental Council and Washington Conservation Voters opened the forum, and retired Evergreen Professor Thad Curtz provided background on worldwide carbon emissions and the impact on global warming. Curtz emphasized that two-thirds of the carbon in the atmosphere is attributable to fossil fuels.

Akua Asare-Kondu from Carbon Washington explained their proposal which is modeled on the British Columbia carbon tax and would be revenue neutral, returning funds generated by the carbon tax to impacted parties. Of the $1.7 billion generated annually, $1.3 billion would go towards a reduction in the state sales tax, $200 would eliminate the B&O tax on manufacturers, and $200 million would go towards the Working Families tax rebate for families who qualify for the federal Earned Income Tax Credit. Akua emphasized that by keeping this solution revenue, neutral job growth would continue while carbon could be reduced, a “win-win.”

If the Governor’s proposal does not pass this year, Carbon Washington’s plans to file an initiative to the state Legislature in March and begin collecting signatures in April. If the required signatures are filed and the 2016 Legislature then fails to act on the initiative, it would appear on the November 2016 election ballot. 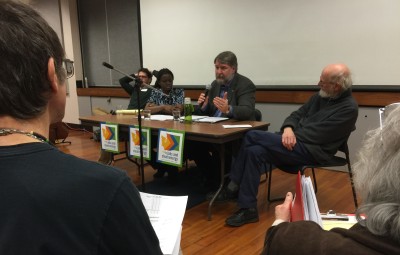 Jeff Johnson, President of the Washington State Labor Council, and Ben Serrurier from Climate Solutions, explained the Governor’s legislation and celebrated the launch last week of the Alliance for Jobs and Clean Energy which will lead the grassroots effort to pass the bill. Ben emphasized that the Alliance represents a new approach for the environmental movement, noting that a majority of the Steering Committee members are not from environmental groups.

Ben explained that the Governor took a more direct approach with his legislation.   The recommended carbon goals were set by legislation in 2008 and with a cap & trade approach he can ratchet down the permitted carbon emission allowances that are allocated each year, not just up the cost of carbon. By auctioning off all the emission allowances the proposal will raise $1 billion annually, 80% of which will go to education and transportation improvements.

Jeff called Climate Change and Income Inequality the two great challenges of our time and stressed the importance of addressing both in any bill. He applauded the Working Families $100 million funding in the bill and the creation of an Economic Justice and Environmental Equity Advisory Committee. Given that the legislation will increase energy and gasoline prices, Jeff wished that more could be done for impacted businesses and families. But from a Washington State Labor Council perspective, with the state having the “most regressive” tax system in the nation, addressing state budget needs is better achieved with the carbon funds. Given the gradual carbon reduction transition envisioned in the bill, Jeff believes that with a “just transition” the state will not have to choose between jobs and carbon reductions.

With the state Senate controlled by the Majority Coalition Caucus, Jeff Johnson does not believe the Governor’s legislation will pass either this year or next year.

Megan Jenny from the Sierra Club closed the meeting with a lively request for the audience to provide contact information, complete a short survey on levels of involvement, and contact their legislators. There was also talk of forming a Rapid Response Team in Olympia and pleas to attend the Legislative public hearing on Oil Transportation on Tuesday.

A consistent theme during the meeting was the need to counter the undue influence and unjust impacts of  of “Big Oil and Gas.” At the same time, when one of the speakers was reminded after the meeting that it was the Environmental Movement that unleashed the bio-fuels contribution to the latest economic injustice in the Third World, soaring food prices, there was a quiet acknowledgement.

One of the local sponsoring organizations, Confronting the Climate Crisis, meets on the 3rd Wednesday of each month at 6:30 PM in the Olympia Center, 222 Columbia Street NW.