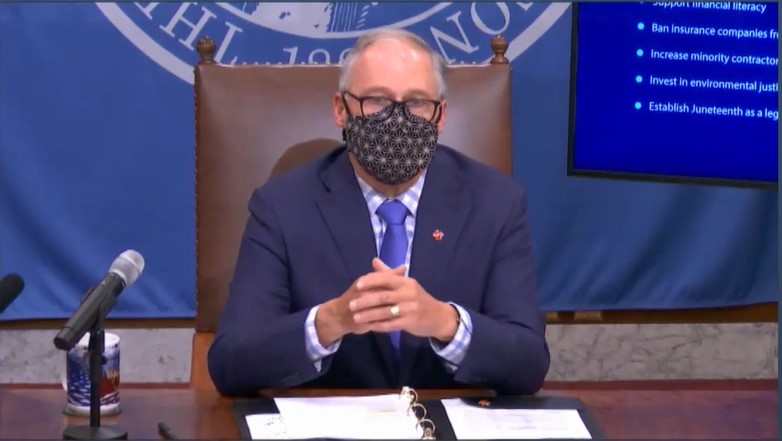 The pushback from Republicans and some key Democrats was fierce after Governor Jay Inslee issued partial vetoes Monday to portions of climate legislation linked to the passage of a transportation package, undoing what some called the “Grand Bargain.”

The Governor issued partial vetoes to subsections of the cap-and-trade and low carbon fuel standard, two major climate bills passed by the Legislature during the 2021 session. Speaker Laurie Jinkins said the move was a clear instance of executive overreach.

Washington Courts have consistently held that as a co-equal branch of government, the legislature is responsible for drafting laws and the executive branch is responsible for implementing them. The Constitution provides the governor only limited powers to veto legislation. The governor’s partial veto today of E3SHB 1091, the clean fuel standard bill, reaches beyond his constitutional powers and we will ask the Washington courts to again rule on the balance of legislative and executive branch powers.”

Senate Majority Leader Andy Billig said the constitution is clear that the governor is permitted only to veto a full section of a bill, not a subsection. He also said these latest vetoes reflect a pattern: “This veto is an overstep of executive power. The governor has attempted to create a power for his office that simply does not exist … What’s worse, this is the second time in recent years this governor has attempted to invent such a power. He lost in court then. He will lose again.”

The Legislature sued Inslee in 2019 over his vetoes of provisions in the state’s two-year transportation budget and a Thurston County Superior Court judge later ruled that he exceeded his constitutional authority.

The Legislature will look toward a possible special session later this year to pass a transportation package, as was promised via the grand bargain, Billig continued.

Sen. Mark Mullet (D – Issaquah), a centrist whose relationship with Inslee has frayed in recent years, issued a warning for what the vetoes could portend.

This sets a chilling precedent and poisons the well for all future negotiations on virtually any tough issue. When it comes to the governor’s top priorities in the future, he should expect a more hostile Legislature if this is the path he wishes to take,” said Mullet. “If I have reservations about a policy but ultimately vote for a bill after my concerns are addressed, only to see that key aspect removed from the bill, why should I or any other legislator believe the same thing won’t happen on future bills?”

The grand bargain was cooked up in the Senate by Transportation Committee Chair, Sen. Steve Hobbs (D- Lake Stevens), among others. The deal tied the two landmark pieces of climate legislation to a transportation funding package, without which the bills would not have been able to take effect. By vetoing that provision, Inslee is clearing the way for the legislation to go into effect immediately.

[T]here never was a grand bargain, as far as the Governor’s role in the process is concerned,” said the Governor’s Office said in a statement. “Even without a veto, a bargain that potentially delays urgent action on climate change and still not guarantees a transportation package is no bargain at all.”

Some progressives and climate advocates applauded Inslee for doing away with the linkage.

Doug Trumm, Executive Director of the Urbanist, wrote that “adding the transportation package poison pill to key climate bills [was] one of the more regrettable and sinister maneuvers of the session. Governor Inslee’s line-item veto seems to nullify this critique in the stroke of a pen.”

Much remains cloudy even with the veto. For one, someone could appeal the veto and the courts could strike it down as an executive overreach,” Trumm continued. “Perhaps even without the linkage, the legislative coalition will form to pass the transportation package anyway. On the other hand, maybe the linkage wasn’t even going to be enough to bring together the highways-or-bust crowd with progressive legislators focused on transit, safety, and environmental justice. Senator Hobbs has failed in three straight sessions to pass his highway-centric transportation package (see the 2019 and 2020 efforts).”

Nevertheless, members of the Democratic leadership fumed over the vetoes and signaled that they will be taking the Governor to court. But if this dispute heads in that direction, Rep. Joe Fitzgibbon (D – Seattle), prime sponsor of the low carbon fuel standard, told the Wire that he’s not on board. He thinks the whole idea undergirding the grand bargain might be unconstitutional.

I think it’s poor legislative practice to condition the enactment of one bill on the passage of an unrelated bill and I think it may be a violation of the single-subject rule of the state constitution. So I don’t agree with the Legislature going to court to defend the practice of logrolling together unrelated bills,” said Fitzgibbon.

After the low carbon fuel standard passed the Senate in early April, Fitzgibbon said in an interview with the Wire that the grand bargain created political questions that could not go unaddressed if the legislation was to become law.

I would prefer these things to stand on their own merits and not be linked. But if they’re going to be linked, are we sure that is going to make it more likely that a transportation package passes, or does that just create more excuses for certain industries or certain legislators to oppose a future transportation package? I think those are political questions we need to revolve before passing a clean fuel standard into law.”

Ruth Peterson, a legislative aide for Senate Republican leader John Braun, speculated on Twitter that Monday’s outcome was predetermined: “The grand bargain was probably getting the bill passed with the understanding that those parts that helped get it passed would be vetoed by Gov. Inslee. It’s what happened with the Manufacturing B&O several years ago. The deal would never had the votes, if that wasn’t in there.”

In a statement of his own, Braun echoed the bipartisan sentiment that the vetoes were unconstitutional and criticized Democrats for not putting a check on the Governor’s emergency powers during the 2021 session.

The Constitution is clear – the governor may not veto anything less than an entire section of a bill. Maybe he’s emboldened by the sweeping authority he continues to have because majority Democrats refused to address emergency-power reform. Maybe he thinks the Supreme Court will overturn the lower court’s ruling. Whatever the reason, his subsection veto today is illegal. That alone says a lot about why our political system has checks and balances on one-person rule.”

Weighing in on Twitter before he signed the climate legislation and issued the partial vetoes, Inslee said that the bills were “a long time coming” and that Washington now “has some of the most just and ambitious climate policies in the nation.”

This article has been updated to reflect that Ms. Peterson’s comments were posted on her personal Twitter account, and not made in a professional capacity on behalf of Sen. Braun.